Here’s a question: Are artists the driving force in the dialogue about art?

I have had some really good news lately. Firstly, I have had work selected for Salon 2011 at Matt Roberts in Vyner Street. This is for the second year running, and is another experimental drawing. The work hasn’t been seen in public yet (in fact it isn’t even on my website), so I’m pleased it has been given this level of support. Secondly, I have been awarded an ACE grant for research and development. This is a first for me, and is hugely significant in many ways. The project is now well under way. More info soon.

A few months ago I made a little note in my notebook about an idea. Nothing special, just an experiment, but I thought I might explore it one day. Yesterday evening, going through one of the new art books I brought out here with me, I came across the work of an artist who had had the same idea and made it the focus of a major part of his practice. There is nothing particularly noteworthy in finding out that we are touching on already-chartered territory, but what is it that keeps us pressing on regardless? For some it may be akin to a drive to turn base-metal-into-gold for glory or wealth, but for most of us, I suspect, it is a very, very personal alchemy.

Yvonne, the old lady here, has small fields dotted about all around. She hasn’t worked them for a long time, and rarely ventures far now. A couple of years ago she came by and told me she was taking me for a walk. I wasn’t given much of an option, but it was perfectly pleasant (if a little slow), and as we walked she told me little bits and pieces about the area. One of the fields we passed was hers. She described how the apple trees (which were quite mature) had grown from where she had fed apples to her cows and they had ‘deposited’ the seeds. She held on to two cows until recently – to give her something to do, she said, but finally gave them up when they became too much for her. These cows didn’t get on with each other. She would drive them back and forth between the field and the barn one at a time. Naturally I got roped in to help on a few occasions. Although she certainly knows the local patois, her french is clear and precise. “Stand there” she would say, “and stop them from so-and-so”. Like I knew what I was doing.

She once told me how she fell through some rotten floorboards into the cow-byre below. “I landed on a cow. It just stared at me.”

One of the fields in which she used to keep the cows is on the dog-walking route. It too is becoming overgrown. There are small oak trees springing up, about knee-high now, but beyond that there are enormous drifts of wild thyme. In places it is not possible to set a foot down without stepping on some and releasing the smell of the oil. The scent this morning was unbelievable.

I have been working on the roof again, putting slates on sides of the dormer windows. I’m well outside my comfort zone, but it is so peaceful up there.

My scribblebook is my friend again. I’m looking forward to turning some of the ideas into reality. 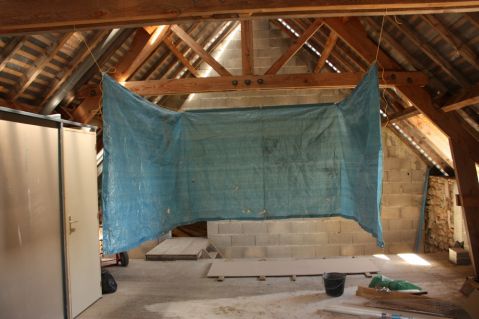 For all my autonomy, I am still affected to some extent by the decisions of other people. For example, at some point over the next seven days or so, I will receive the yes-or-no outcome of two potentially significant decisions. Either way won’t be life-changing, but a yes could make things easier – if not make a difference. The frustrating thing is that there is an element of subjectivity, to a greater or lesser extent, over which I have no control. What do I do if the answer is a no? I carry on in the same direction as before, just maybe by a more circuitous route.

I’m thinking 6m x 10m or so. That’s fairly big, is it not? Ultimately the size will depend on location, but it’s not just a case of bigger is better. I have had a few thoughts on alternative placements, too.

I hoard ideas that interest me for reasons which may be elusive, like a face that seems familiar but which I can't quite place. My practice is an exploration of these ideas.