Can Images move us any more?

in relation to images of conflict, photo-journalism, and digital media, which archives and enables the proliferation of photographs of violence.

The past couple of weeks have witnessed violent protests in the Ukraine, as well as Syria, 80 Ukraine people have died, and the president has fled the country. Russia waits on the doorstep.

One of the most disturbing scenes on my TV – a neatly-dressed middle-class women stuffing polystyrene into water bottles of petrol – making small napalm bombs!

I can understand why artists don’t feel they can engage with the subject of warfare in their work – but most artists I’ve met don’t engage with it in their private lives either – they shrug, and say it’s terrible, which it is.

Of course we can do nothing – can we?

Perhaps we should at least be thinking about the kind of world our children are growing into, and how we could shape it? Never before have we had the means to communicate and share ideas on a global scale, now we have, we are not using it.

Unable to do anything but watch and condemn, I focus my attention on making work that can only comment in dismay: one piece of work each month if possible.

‘Yesterday,Today,Tomorrow’ currently part of exhibition at the Beaney Museum and Gallery in Canterbury.

Accompanied by an open discussion
‘Can Images move us, any more’ which I hosted at the Museum on 15 February.

‘Salient’ a short film, screened for the Sidney Cooper Gallery Open Film Festival and on vimeo.com/patwilsonsmith 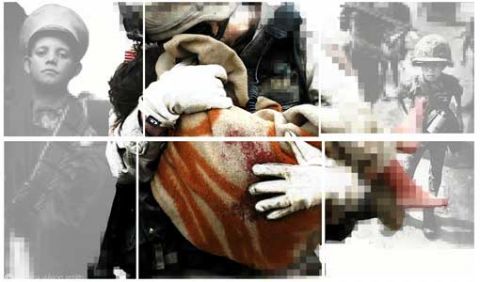