Today is 2nd May – I’m surprised that I haven’t been able to visit my blog for a month – until I think of all the commitments, distractions and ephemera of life.

Two days ago the Assad regime in Syria was supposed to give up its stockpile of chemical weapons.

Today Russia stands with its big feet on the borders of the Ukraine.

In Nigeria, schoolgirls abducted two weeks ago on the eve of their exams, have not yet been located.

In the Arctic countries fight over resources, regardless of the delicate balance of the environment.

And so on and on…

What is wrong with the governments who are supposed to be managing their countries? They have not developed, they do not think beyond today. They have no imagination, and even less humility. They are, on the whole, in-human.

In Britain over the next few months there will be electioneering, and where are the people with moral fibre, character, presence? Politics world-wide seems to have boiled down to a game in the playground between bullies. If they’re not arguing about the economy, they use religion. ‘They’ tend to wear grey suits and some, ethnic headgear. ‘They’ make decisions that we have to live with, or die for, it seems.

We are not without power, but we’ve been conditioned to be afraid of using it.

I found it difficult to make my ‘war-piece’ for April, and finally settled on using a painting I’d abandoned temporarily, and an aerial view of Kiev. It’s called ‘Is this what we died for?’ and commemorates eight Ukranians killed on 20th February this year.

How many more are about to die, for the sake of flimsy ideologies, and rampant greed? 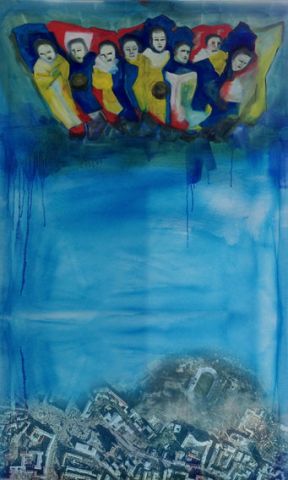