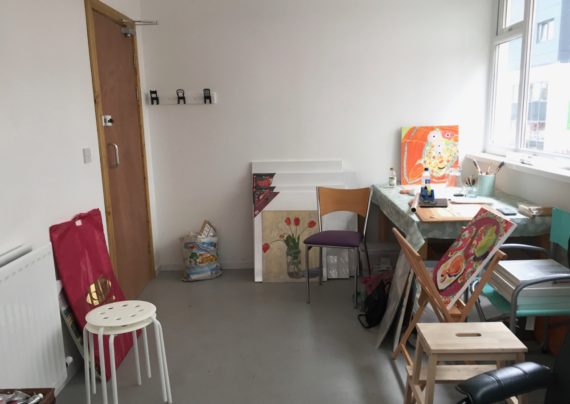 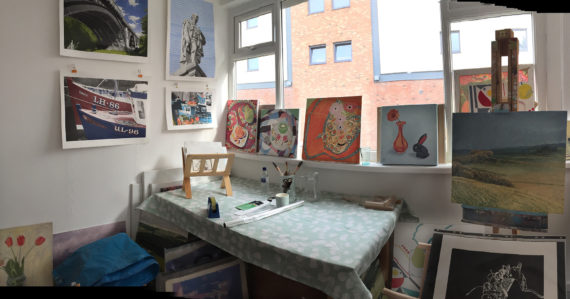 My friend and studio mate Claire were due to open our studio for the first time on Sunday 24th March 2019. It was our studios’ very first open studios event. The building has been standing empty for some years before being converted to studios so even people who know the area quite well were probably unaware that people had started to move in and work in there.

We had moved in too late to be included in the official Ouseburn Open Studios publicity and I was concerned that people would be unaware that we existed and wouldn’t even be looking for an open door into our building.

The efforts put in by those of us taking part (plus some of the studio occupants not ready yet to open) to tell people about our opening worked. It was a slow start (but that gave studio occupants the opportunity to visit each other’s studios – a rather rare chance during open studios). Outside visitors started to appear around midday. People took their time to look at our work. A couple of people made a return visit. This seemed positive. One couple mentioned that they visited because they saw a flyer in the Biscuit Factory’s café while having breakfast there so we know flyers in local eating places are worth doing.

Sadly, after all the effort of promoting the event and planning what would go in my space, I couldn’t be there myself. Lifting fairly heavy piles of prints when searching for the prints I wanted to take into the studio on Saturday morning, I had triggered a bad flare up of rheumatoid arthritis in my shoulder, and to a lesser extent in my hands. I was grateful to Claire and her husband for looking after the studio that day and sending me reports of what people were viewing. I was also glad to get reports from friends who visited.

We can be more prepared for the next event. This time we were starting from scratch, including finding out who was in the studios and setting up social media accounts. Now some people know where we are and what sort of things they might see so we can build on that for the next event.

A final thought occurred to me as I went to sleep: ‘I must get a clicker.’ Years of working in public culture means I need to establish baseline figures against which to measure if we’re succeeding in getting people through the door.