Yesterday I went to the scrap metal yard, early.  Fortunately for me, they always have HEB beams in stock and I was able to measure to get those that were closest to 10cm in depth (10.2-10.3cm) I can only hope this will be close enough to fit inside the timber frame. When I called Mikkel the carpenter, he was still asking if I could get more like 9.5cm which is somewhat worrying. I was trying to explain they come as standard and I can’t really just get what I want.  Anyway, fingers crossed. Today they’re not actually working on the frame, but the steel will be delivered today to Roskilde.  I will go tomorrow morning with the paint and other materials and inspect the progress so far.

I also spoke with the site manager for the exhibition yesterday.  He told me they’ve begun installing some work already: namely a huge jetty, circular I think, which is something like 30m in diameter.   That sounds quite a job too.

Meanwhile my glaze samples in the studio are only just drying now, after ten days. I’ll only have five days for the rear of the main structure to dry before opening. I can only reduce the proportion of stand oil to solvent a bit and hope that the outdoor conditions with sea breeze will accelerate the drying sufficiently…

The first big wobble came today. I got an unexpected call from Mikkel, lead carpenter on the project; unexpected because I didn’t know they would be working today, on the weekend.   The wobble came because I came to suspect he wasn’t really working on the assumption that the steel beams that will support the structure internally may well be more than the official 10cm deep.  I had measured them when I went to order them at the scrap yard and found most of them to be 10.4cm deep. This information I relayed to Mikkel at the time, along with my concerns that if he was using 10x5cm timber to build the frame, we might find ourselves unable to insert the steel beams once we arrive on site for the installation.  I asked him at the time if he needed to have the beams in the workshop before building the structure and he told me no.

Now he is telling me I need to get smaller beams (though the beams were recommended by the structural engineer, he told me the size needed and spacing) or to make sure I get the ones that are 10.2cm or less.  So I will go to the steel yard tomorrow, hoping that there are some beams that are less than 10.4cm deep, and that I can get them cut and delivered this week.  Otherwise, we have a fairly major setback already…..

Today I got word that the carpenters have started work on building House of Cards.  Massive relief that they are underway, with three weeks to go before it is due to be collected by the exhibition organisers. Next week is only a four day working week because of a Bank Holiday here and I still have to paint, graphite, glaze and allow for drying time before dismantling and wrapping for transport.  Only a little over a month until installation. Still, like all things you anticipate nervously, it feels good to be underway.

and talked to her about the project, I have decided I should launch myself into Twitter.  I’ve avoided it up until now feeling that life is busy enough, but she convinced me that it is good for spreading the word so to speak.  From my newsroom shifts at the BBC while at art school, I know it’s also an important tool for journalists now, an important source of information. Time to stop burying my head in the sand… 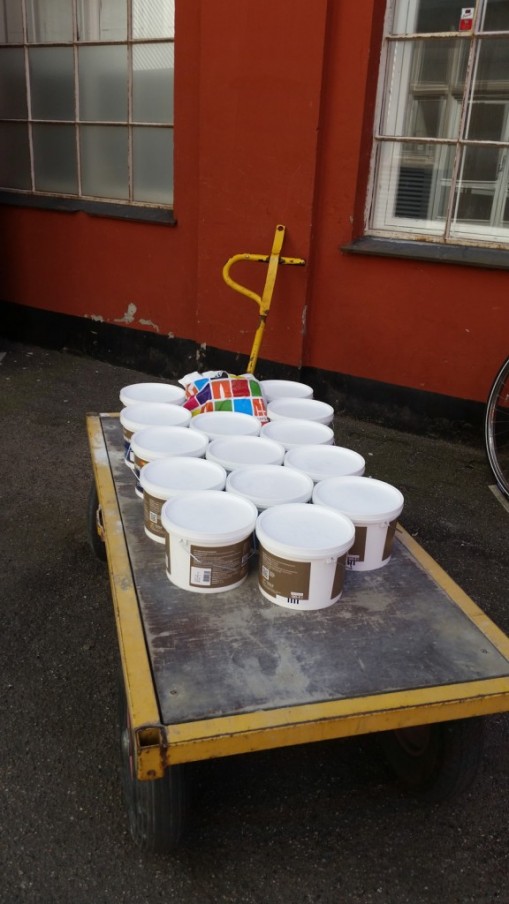 There haven’t been any blog posts for a few weeks because I’ve been in Mexico with family, taking a break before the final push (and introducing my son to his granny for the first time).

Now waiting for the carpenters to start work on building the final structure in their workshop in Roskilde.  I had pushed for a start date of 20 April, to allow time for the paintwork that I will need to do once the structure is assembled, drying time and for it to be dissembled and packed before the week of 18 May when the lorry will come to take it to Aarhus.   That date has slipped;  on Monday it was either going to be a start date of 22nd April (yesterday) or 27th (Monday).  So far, no news.  It is a nervous business working with people you don’t know very well on such a large project (though one of these carpenters does come highly recommended by a friend in the studio, and he did do some work for me last summer, building the scale model so I have some grounds for confidence).

I am meanwhile busying myself with assembling everything I will need once the piece is ready for painting.  Yesterday went and bought 22.5 litres of undercoat and 15 litres of top coat for the front side of the sculpture (the rear will be rubbed with graphite and glazed – another anxiety since I’ve realised it’s unlikely to be dry before the show opens).  The final paint colour was decided just before I left for Mexico, by analysing the composition of the paint chart colours and making up my own. Fortunately it came out right..a bit darker in tone but warmer than the samples I’d been trying. More like clotted cream.

This morning my task is to watch videos on the Copenhagen town hall website about registering as a business.  With the expenditures involved on this project I need to do this asap to try and save a bit on tax.

Having finalised the construction method for House of Cards, I have been busy completing the proposed installation sequence for the exhibition organisers, and trying to finalise the budget.   I found out that one of my grant applications was successful!  I have received 15,000 Danish krone (about £1500) for the project, in addition to the 10,000 I got from the exhibition organisers.  I have also had two rejections, one from the Danish Arts Council last Autumn, and one from another private fund, Beckett Fonden.  Still…it feels like a minor triumph to have been granted the money, especially since I laboured through the application in Danish. There are still a few outstanding, another score would be very much appreciated.

Meanwhile; the devil is in the detail they say…  I began checking dimensions of wood/steel.  The sculpture – of which I include more photos here, since I realise there is only the one at the top of the blog – is to be built of a wood frame, clad with støbekrydsfiner. This I think might be called coated plywood in English.  Once sanded it gives a much smoother surface than ordinary plywood, since it’s coated with plastic.   The structure will be reinforced with steel construction (HEB) beams, but these can only be inserted on site at the point of installation because the sculpture will only just fit in the lorry for transport anyway, in parts, without steel beams sticking 80cm out of the bottom. So the solution (such a Danish phrase…! They love talking about ‘solutions’) has been to design channels into the wooden interior frame, for the main three part structure anyhow.  These will house the steel beams once the thing is erected.  That means you need a good fit though, and in the past few days I discovered that 10x5cm wood actually meant a variable, ca. 9.5cm x 4.7cm wood, and that 10x10cm HEB beams actually meant more like 10.4 x 10 cm.

I am also having last minute dilemmas about paint colour.  The original maquette I made was sprayed with aerosol spray, but I quickly realised I couldn’t do that for the full scale sculpture. It needed a paint gun.  But matching the colour of the paint to the maquette is proving a headache. I have a number of sample panels laid out in the studio and am systematically trying different paint samples.   Of course I didn’t undercoat the original maquette, I have realised, so the fact I have undercoated my samples (partly to aid adherence of the paint to the plastic coated plywood) with white, also means they come out lighter.  I’m now faced with a situation where the closest colour match is like a slightly cold putty colour; I prefer a warmer tone, but the one I have is much lighter than the maquette.  Coupled with the fact that my maquette is tiny and the surfaces in the final event will be much larger, and seen outside, probably in bright sunlight (it will be June), compounds the problem of which paint I should go for….headache!