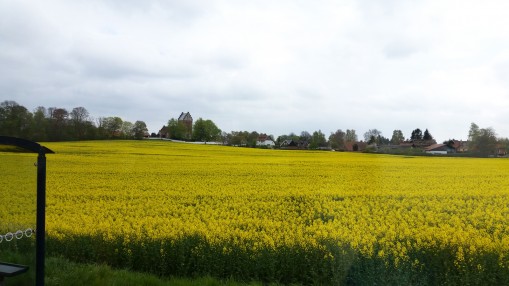 It takes about an hour and a half to get over to Roskilde and back every day.  Most of it is mind numbing suburban landscape, it exists in Denmark just as in Britain.  But this is a nice view of an oil seed rape field  just near Høje Taastrup Station.

Began the hard work of preparing the panels which will make up the main structure for painting today. I had hoped to sand the third and largest ‘wing’ for the front, but it won’t be made ’till tomorrow. The urgency there is to try and get the ‘wings’ finished this week so the glaze on the rear will have maximum drying time before the sculpture is collected for freight to Aarhus in two weeks’ time.  I won’t glaze the main structure until it’s installed.

Still: not like there isn’t plenty to do in the meantime..in breaks from sanding I would look up and see all the other panels silently awaiting my ministrations. Seven in all, I sanded one today. .