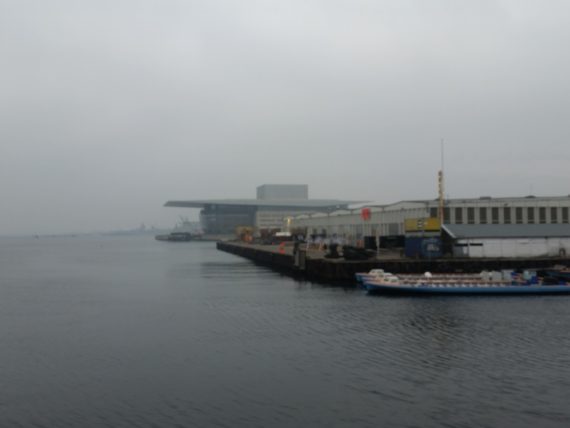 I thoroughly enjoyed my trip this morning to Copenhagen Contemporary, which opened its doors in August last year.

To get there I went over the Inderhavnsbro, a new cycle and pedestrian bridge linking Nyhavn and Christianshavn; an experience in itself, giving expansive views over the water towards the opera, the new theatre and beyond.  It links the centre of the city with what for me is one of the gems of Copenhagen; the post industrial backwater of Refshaleøen.  While this is a blessing in some ways, one also hopes it doesn’t hasten the development of the area too fast as it is still a relatively untouched pocket at the moment. I remember considering the possibility of renting a studio there, in a former ship building loft: Skabelonenloftet, when I first moved to Copenhagen. But even with this new bridge, living where we do, it would have been hopelessly impractical!

Back to the museum. I had heard very good things of Ragnar Kjartansson, but must admit to being a bit underwhelmed by his Scenes from Western Culture, a series of massive video screens showing very slowly developing (looping) tableaux of staged situations. The very idea of reducing Western Culture to a small number of one person’s imaginings seems ambitious not to say unachievable. The images were attractive to  look at, but though I tried, I couldn’t find much meaning there. I did really like his other installation, A lot of Sorrow though, where The National play their song Sorrow over and over again for six hours straight.  The song is beautiful, and the effect of watching them perform it is hypnotic. Another slightly pointless exercise (at the risk of sounding far too literal to have any artistic sensibility at all!) But one which was very satisfying at least for this viewer.

On to Bruce Naumann. I was glad to have the chance to catch this having missed a show in London a few years back.  I found most of the old work a bit tired and unexciting, but did enjoy Good Boy Bad Boy and Raw Material BRRR.  Happy 75th birthday to Naumann at any rate. I salute him for exploring the boundaries of insanity. And it’s not every day that you read that an artist is living as a cowboy!

Finally Celeste Boursier-Mougenot who had installed 88 zebra finches with a series of electric guitars linked up to amplifiers. The resulting ‘composition’ sounded fine, and the birds were charming, but I couldn’t help feeling for them, unable to choose or escape from this environment. It did make me start thinking about animal behaviour though. If one or two should want to stop the noise and realise they should avoid the guitars, would they be able to teach or indeed convince all the others to follow suit? Might you get some sort of bird strike..Maybe they love it and will want their guitars back when the exhibition ends in March. I couldn’t help feeling a bit uncomfortable; the artist’s ego at the birds’ expense.