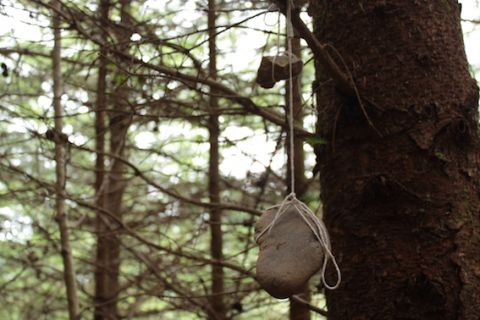 This blog aims to present activity during a 7 day period of residence in Outlandia, Glen Nevis, Scotland.

Outlandia is an off-grid treehouse artist studio and fieldstation in Glen Nevis, Lochaber, Scotland. A flexible meeting space in the forest for creative collaboration and research

A revisited edit combining two recordings and other images from nature.

Part of research and work developed to document processes and games created to measure the passage of time. Such play is informed from limited materials such as those hand-carried and those within the landscape – rocks, trees, vegetation, paths, e.t.c. The work is framed through seriousness, the mundane, nonsense, failure and success.

Reading and looking at your work I am left wondering, ontologically, how to think of it: Is it a physical object? Several objects? A class of objects? An abstract object? An event? An Act?

I think it is all of these things simultaneously. The items collected are physical in nature as I can touch them, feel their textures and weights. I’d agree that they are a class of objects, an informal category of things with the parameters of choosing them being found, located near Outlandia and naturally occurring. They are indeed several objects that have been combined to form an another loose object – loose being that they can fall and their state can change through chance or intervention.

In terms of the works being acts and / or events I’d say yes to this as well – in much of my works I create a framework around an occurrence (staged or observed) which then takes place within the frame and what happens within them is left to chance. So for these works they are acts in the sense that the concepts have been determined before the piece is recorded, however I’d also say the works are events as what happens within them to some degree isn’t preconceived.

In your experiment you collide aesthetics with physics (amongst other things) – are you, as the artist, integral to the apparatus: was it your hand? Is it important that it is human?

For me art-making is about a curiosity with if, how, what and why – I don’t necessarily think that as an artist I’m am integral component within a situation. It was my hand, however parts of my body represent the parts of many people (artist or not) who perhaps have explored similar kinds of experiments throughout their lives. So yes, it’s important that the interaction is human but not that it is from an artist per say. As in my other works, I do use myself as a kind of prop but I feel that the figures can represent countless others – in a way they function anonymously. They are just another small part within a larger whole.

Field experiments are so called in order to contrast with laboratory life, at Outlandia were you occupying both spaces simultaneously?

Yes I think so. I found that the space Outlandia occupies as one that fluctuated between studio, laboratory and outpost. With the work I made I was aware I was taking the field experiment indoors, away from outside space. Outlandia didn’t feel like a laboratory in the traditional sense and seemed to fit with activities that could occupy various conceptual frameworks simultaneously.

Part of research and work developed to document processes and games created to measure the passage of time. Such play is informed from limited materials such as those hand-carried and those within the landscape – rocks, trees, vegetation, paths, e.t.c. The work is framed through seriousness, the mundane, nonsense, failure and success.