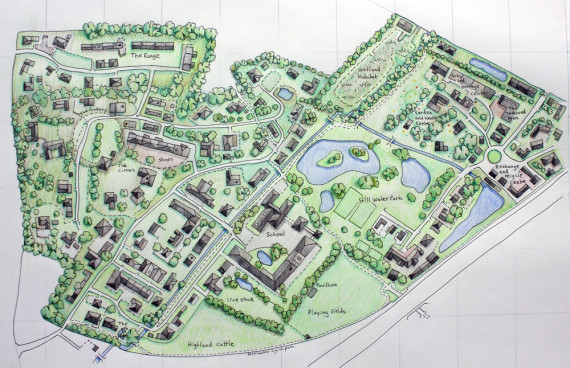 The beginning of a new place

A site in transition

I have often had conversations most likely with older people, where they have asked me: ‘Did you drive along the high street?’

No no… I came along such and such a street to get here:

or ‘Where have you left your car?’

I parked across from the newsagent.

The response to my reply is something like: I remember when my friend used to work in the butchers there! Or that used to be an apple orchard!

The statement rarely connects to much I know about as I have no memories or local knowledge and its hard to respond with an empty information pool. As I don’t know their friend nor did I throw apples from long range at unsuspecting pedestrians passing on the other side of Enysford Close.

The reason I am explaining this is because I did exactly that to two building workers I encountered walking over the fairways this afternoon. They appeared surprised to see me walking along rather gingerly across the site for fear of slipping over in the soft mud.

‘you alright mate’. And they looked at me in that way that shows they expected a reply!

Yeh….. I was re-walking the path I used to bring my dog along when we walked here together…. this was a disused golf course a while back.

I could see by their faces this not going to go much further as a conversation as they don’t care about my memories or sentimental associations to what is now an epic quagmire carved up in some places by plant machinery to resemble Ypres.

I noted their blank faces and followed up with, ‘it wasn’t so fekin muddy then’.

‘no…. full on wellies job fella’. Which led onto an exchange where they told me they were constructing the car park and then onto the football, hockey, tennis pitches over there. They also said that the company they worked for thought work would have to start in the new year because of the weather. They were only sorting out the public footpath fencing. Then suggesting the footpath would go altogether as building progressed, and you might have walk along the road right over there!

Accepting change seems a difficult thing – or is it age related? 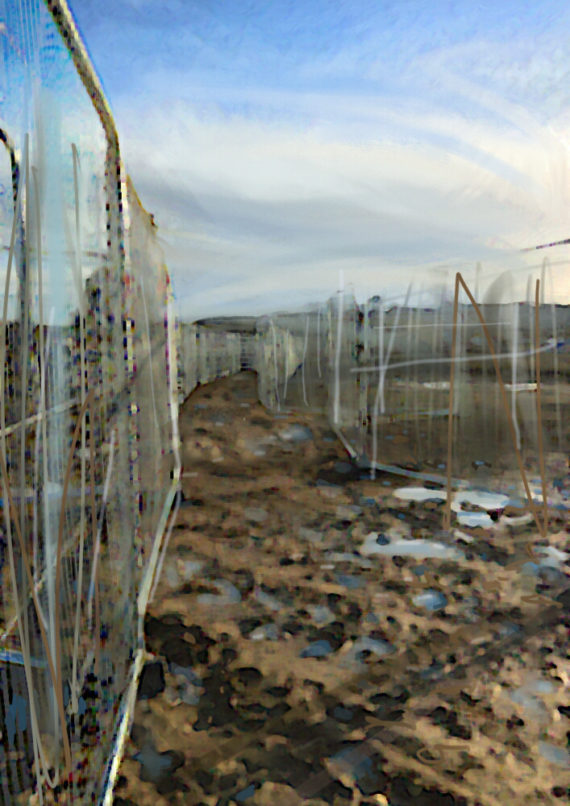 It was more like Passchendaele than the golf course I remember!

Next time I go over there I will visit the small finished section and see how festive the new residents to the estate are?  Look and see how much in the way 0f Xmas decorations are up.

I walked over the Fairways this morning: I did that because I used to walk there when I wanted space, somewhere to reflect, have internal conversations with myself, listen to the birds, look at the autumn colours, and enjoy being in a natural landscape.

All those things have long gone, and I knew that. But I had resigned yesterday as one of the Directors of a local arts organisation and I was getting emails in the fall out from that. I remembered how I used to enjoy the tranquillity of the site when it was an unused old golf course and in situations like this would have just took the dog over there and enjoyed the fresh air.

I decided to carry on with my walk over there plan, knowing I would get a different experience as remembered from an earlier time! In the distance I could see two men cutting down an expansive area of reeds (I had nicknamed this area the swamp) they were using small yellow tractor type machines not unlike a lawn mower to scythe down 5-6 foot high reeds. As I walked past viewing them again much closer this time I realised these machines were operated remotely and the driver was walking along side or behind them!

They had noisy engines and it made me notice the drilling, the pile driving, the mixers, the motors, the alarms and beepers all working simultaneously  together on the other side of the path, on the building site itself. As I walked along a could still hear black birds singing amongst all of that.

I noticed an out of context empty plastic bucket in a small copse! It made me remember I had split not one but two plastic buckets about a week ago installing my last mosaic project in the town centre. A replacement bucket for free. I wondered, is it more than a bucket, its a container. It looks empty, but then magic, good luck, and three wishes might not be visible on first inspection! What did it contain, or will it contain in the future? I put it down saying I will collect it on the way back. 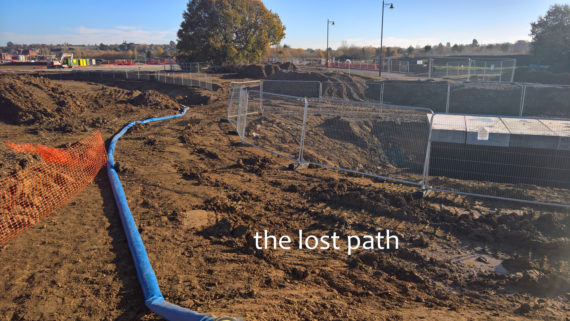 As I walked on the well worn footpath it started fragmenting into small sections and eventually disappeared because massive earth works, road foundations and reservoir type water courses truncated it. I pressed on across the building site over half finished tarmac roads, muddy piles of earth, water pipes, hoses and flattened half buried Harris fencing panels. Eventually I found a short section of the path again but was forced to stop as a yellow barriers blocked the way with a sign saying footpath closed.

I walked back the way I came, picked up the bucket as I walked past it and brought it home.

Well over a year then, the building works on site. Entry onto the estate finished with traffic lights and road alterations all complete. There is a corner of houses completed and I had heard someone a few weeks ago describe the houses as being ‘thrown up’ meaning things were being build fast. Surrounding lakes and landscaping at this initial entry point all done as well. I had noticed that the first new residents had already moved in. There might be about a dozen even more houses ready for people and several of those are occupied already. So I decided to walk in and take a look around:

It was Sunday morning and I saw a van unloading washing machines and other white goods outside a new house.

I noticed a lot of full up dustbins (may be Monday is bin day on the new estate).

I saw an RAC van I don’t know if it was a call out or whether the guy was at home sorting his van out before his shift or whether he was working on a broken-down car in a garage? He did leave the estate in his van at the same time I was leaving!

I saw an occupied house with a small plastic gnome on the garden path holding a sign which says ‘Go Away’!

I saw a red ribbon and bow tied across the front door of a house, as if Redrow Homes were making a welcome gesture to new owners who had not arrived yet (maybe they would arrive on Monday?)

I saw a house with a pair of pink trainers just left by the front door, as if the mud would make the new carpets dirty?

I saw a couple (I think they were potential buyers looking for the show homes office which was open). He was wearing what seemed a very freshly laundered glowing lemon yellow shirt almost stiff and starchy like it was just out of the box wearing suede shoes. He reminded me of Dom from Gogglebox. She was power dressed or making some kind of statement – in a short shiny dress and a bag that was not snake skin, but was probably an organic patterned fabric with gold fastenings on. Later I saw them drive out in a coppery/gold coloured BMW number plate UDD22 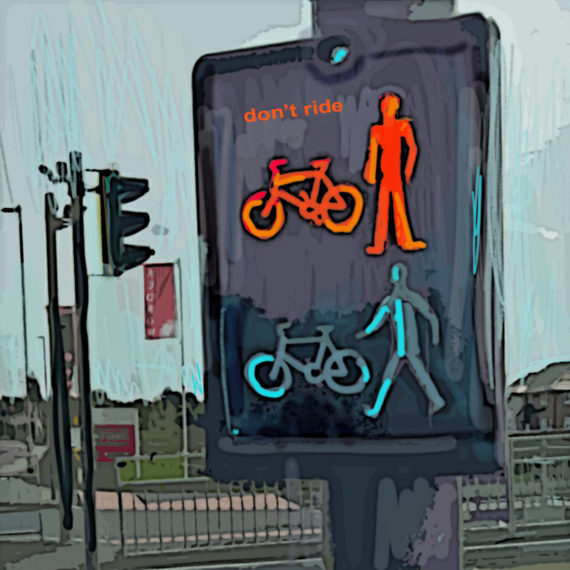 I also noticed a sheet of 8×4 18mm ply-wood on the road very close to the show homes office. I had recently paid about £30 for the same item. I could not tell if it had been placed there to cover missing or damaged service or man hole covers temporarily, or whether it was just left there? Possible as this is effectively still a building site even though this corner tries very hard to look like it is a new community of happy house proud people with pansies and other small colourful plants growing in the front gardens of the show homes.

Solids, liquids and gases are called the three states of matter. Materials can be changed from one state to another by heating or cooling 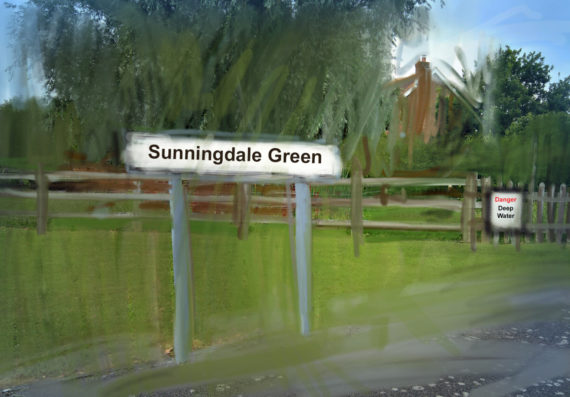 I  walked around the development site and tried to imagine a future when people have moved in?

I found some fragments of orange card with hand written notes about physics on them! Probably written by a secondary school pupil. They were discarded and mixed with a lot of other unimportant rubbish. 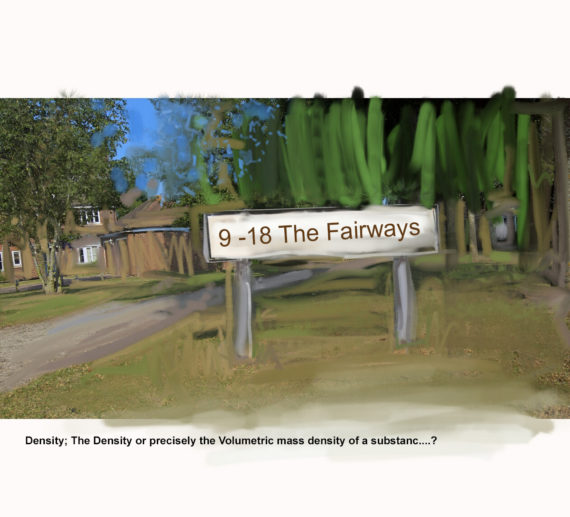 The law or conservation of mass states that mass is an isolated neither created nor destroyed by chemical reactions or physical transformation. 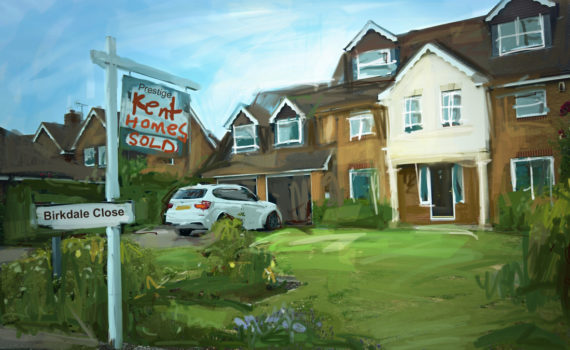 Liquids and gagses can flow solids keep their shape

Gases can be squashed. 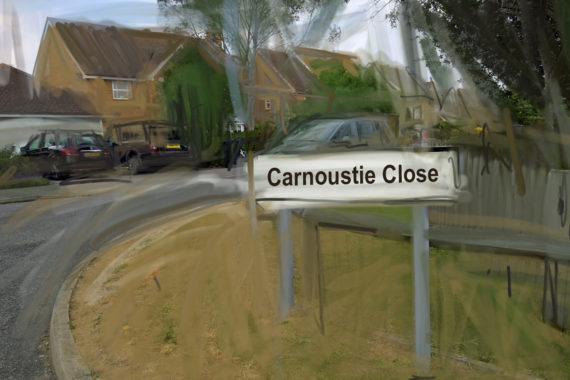 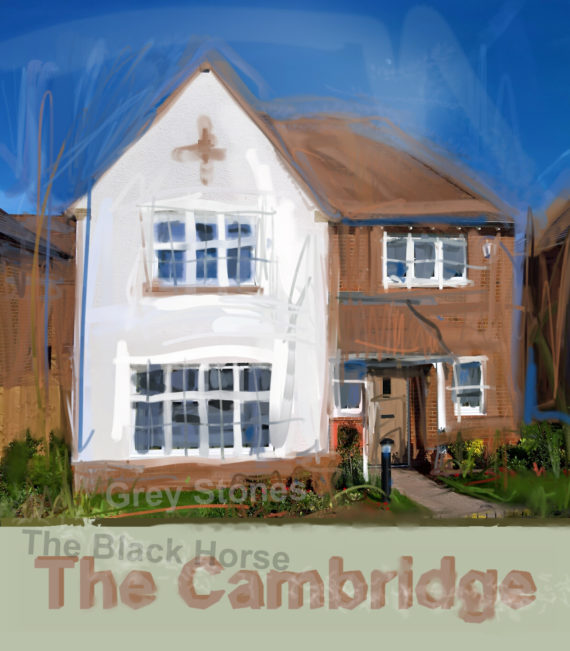 en-suite to the master bedroom

an executive home at a reasonable price 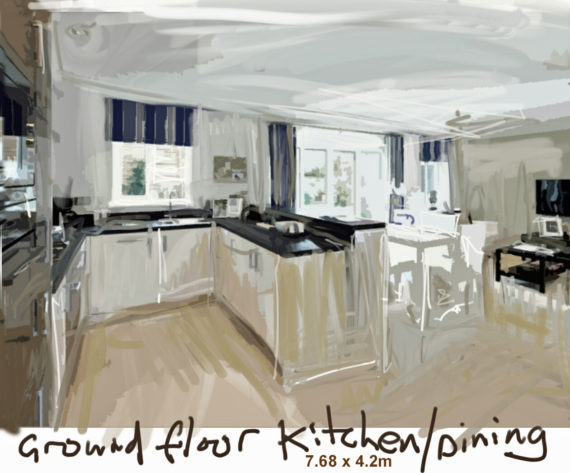 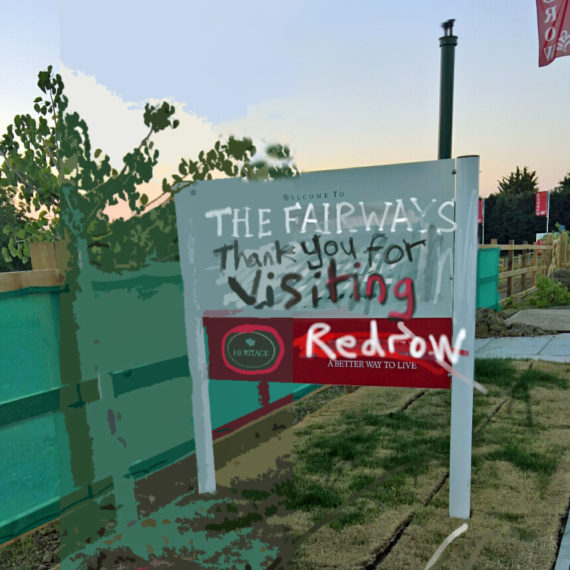