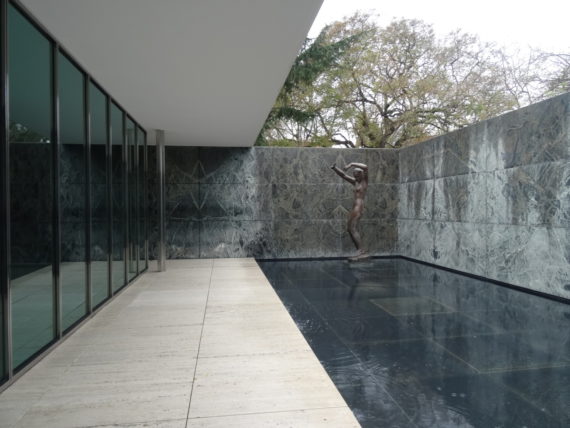 The Barcelona Pavilion was designed by Ludwig Mies van der Rohe (1886-1969) as the German National Pavilion for the Barcelona International Exhibition, 1929.

An analysis of this building reflects the aims I have pursued during this project:

Built from glass, steel and four various kinds of stone (Roman travertine, green Alpine marble, ancient green marble from Greece and golden onyx from the Atlas Mountains), the originality in Mies van der Rohe’s use of materials is found in the ideal of modernity they expressed through the clarity and precision of their geometry and assembly.

The Pavilion was dismantled after the Exhibition in 1930. However, due to its significance in Mies van der Rohe’s career and in 20th century architecture, it was rebuilt in 1986 on the original site.

The materials Mies van der Rohe selected, together with his design, for the Pavilion convey a multi-sensory narrative which moves backwards and forwards along a timeline from ancient, through contemporary to future possibilities.

Despite the tiled construction of the marble walls and floors, they appear to form seamless slices of a natural material which looks and feels harmonious and sateen.

The patterns in the marble, including those formed by fossils held in suspended animation, are the result of the energetic-churning of the earth as it integrated disparate materials.

The sometimes-delicate streams forming bold patterns (see Figure. 3) forged within the earth are further articulated by their subtle, harmonious, planetary colours and tones.

Figure 2 is an image of an exterior space. It was raining on the cold, February morning when I visited the Pavilion which meant I had the joy of experiencing the sound of rain diving forcefully into the surface tension of the water in the shallow pool reminiscent of a Japanese Zen garden (intended to imitate the intimate essence of nature). Beneath the 2/3 inches of water in the pool is a layer of regular sized, pale-grey stones.

Mies van der Rohe used white marble – the result of the metamorphism of very pure limestone – to surround the Pavilion’s pool; it covers the floor, bench, walls and shelter (called a “hojo” in a Japanese Zen Garden – the residence of the chief monk of a monastery or temple).

Thus, the exterior space creates a place in which people instinctively slip into quiet contemplation.