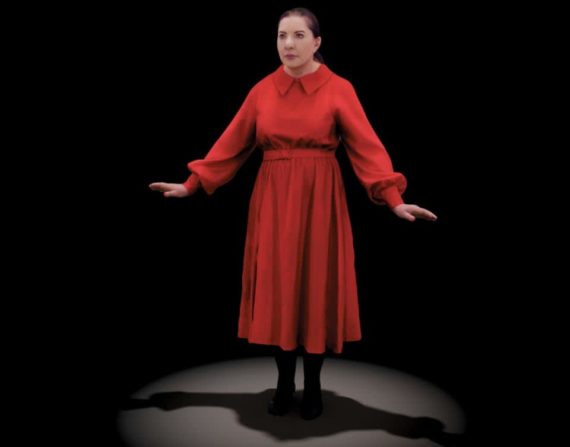 Image courtesy of Marina Abramovic and Tin Drum.  Thanks to The Serpentine Gallery, Press Page.

In 2017, while working on a project based on architecture in the landscape at the University of Essex. I wanted to equate the individualistic challenges each student confronts at university with the quest of a mythological hero. The trials heroes face are issued by someone powerful and their success determines whether they become a king, marry, receive enlightenment, return or not from the underworld…

While life on the Campus is buzzing with social encounters and opportunities for relationships, ultimately each student is on their own learning pathway grappling with their unique quest.

I decided to generate a hologram of a single student sitting at a library desk engrossed in their quest for life-changing knowledge and project it on the pavement of the thoroughfare outside the iconic, New Brutalist building which accommodates the Albert Sloman Library.

So, I looked around and asked “Where is the technology?” convinced that it must exist and I could use it to being forward my vision – sadly, the technology was not within my grasp.

On the 23rd February, I went to The Serpentine Gallery, London to see Marina Abramovic, The Life, 2019. Using augmented reality which Abramovic and her team achieved the creation of a hologram. It took ten hours of footage from 36 moving cameras to generate the avatar and one minute of the performance.

N.B.
Augmented reality is an overlay of content on the real world, but that content is not anchored to or part of it. The real-world content and the CG [computer generated] content are not able to respond to each other. www.Foundry.com

Visitors were greeted by assistants wearing white coats who relieved us of coats, bags, phones etc., and our eye-glasses. The clinical atmosphere generated a quiet, orderly, compliant queue. To compensate for the loss of our glasses, we were invited to try out different lenses which indicated which spatial computing device (Head mounted displays) we required.

After calibrating the headsets, we were guided to a vacant spot along the circumference of a five-metre circle in the centre of the gallery space in which Abramovic’s avatar appeared.

Wearing a belted, red dress with her dark hair pulled back into a pony-tail Abramovic walked slowly around and within the circle. She moved her hands and arms and brought them up to her head as though grappling with disturbing thoughts (my interpretation).

At intervals her image dissolved, spectacularly into blue splinters of light some of which clung to her lower legs which was then all that could be see of her for a few seconds. Sometimes, she walked forwards and backwards in and out of the shards of light as though uncertain about whether to materialise or not – thereby be seen or not.

Visitors could walk around Abramoivc’s avatar and so she could be seen from any 360 degree angle. Occasionally, she disappeared but we could see her shadow directly below her walking form.

I loved the variety of reiteration of the sense of being and not being with others – or even with oneself.