‘Papertrails', is a one year artist-initiated project working in the woods and commons of Elmbridge in Surrey making sculptural responses to the landscape. The project is funded by a Grant for the Arts, The RC Sherriff Trust, Elmbridge Borough Council and The Churches Conservation Trust with the Friends of St George’s Church.

As a follow-up to this 'Papertrails' project I have been asked to make two further installations of the 'Storytrees', one using some of the as yet unused stories contributed by local people as a trail through the Elmbridge woods and the other in the courtyard at the Lightbox Gallery in Woking. I am intending to use stories from Woking for this group. There are four trees there which will work well as they will clearly be part of a group or series but it will be very different working in a courtyard rather than in the woodland.

The last couple of weeks have been interesting. The project refuses to be finished. All sort of follow-on bits are appearing at the moment. Some work from the project has been sold in an exhibition in the US and other pieces are being shown in Esher and at Farnham Maltings in Surrey and the 'Storytree' strand of work is threatening to become another project of its own. During the summer it has been suggested that I work with a group of local people on some more stories to make a slightly less ephemeral, larger installation of this piece. When these things happen I'll update the blog but until then I am going to start a new blog to give form and voice to the rather less purposeful yet potentially extremely fruitful year ahead. 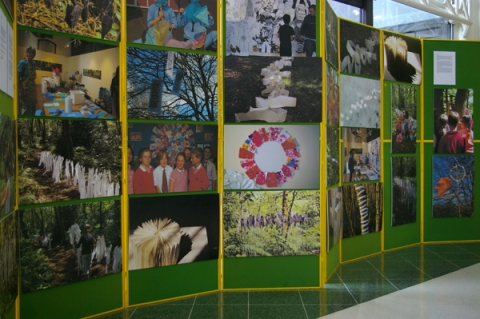 A lovely day with brilliant, bright, sunny weather so a good context for the last workshop of the Papertrails project. There were twenty-one 7 to 12 year-olds and three helpers as well as me. One was the Countryside Liaison officer and the others were from Elmbridge's children's holiday activity team. During the day we made sculpture and explored the West End Common at Esher. Activities included making things that responded to the environment. We made windmills, moblies and sun prints as well as having a go at papermaking. 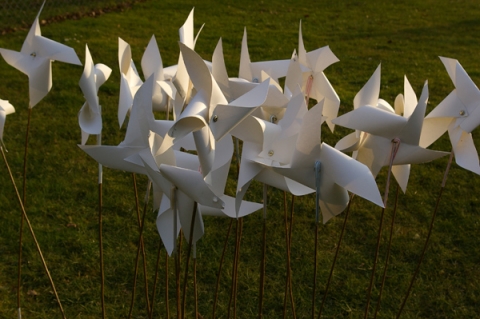 Coming up as part of the project are a workshop with children on the 19th February and a last showing of work (photographs this time) at the Civic Centre in Esher. Elmbridge Borough Council have been very supportive of the project despite having a small budget for art and so it is good to show some of the documentation of Papertrails in their home as it were. Several of the Councillors have been frequent visitors to the studio at St George's Church and have been enthusiastic supporters of the project over the year as has Maggs Latter, the Arts Development Officer for Elmbridge.
The other day I found out that instead of the 9 or ten children I expected to have signed up for the holiday workshop there were eleven on the waiting list beyond that, so there has been an element of restructuring going on to make things work with a full house.

Until the last events connected with Papertrails have passed and my evaluation of the project both for ACE and for myself have been carried out I am continuing with this blog, however I keep finding things that don't fit into the heading of 'Papertrails residency' and aren't yet another distinct project. Perhaps I need to start a second blog!