Giving away my babies…
My name is Donna Williams and I am a poet. I create poems in both sign language and English, and I lovingly craft them. I start with an idea, build it up, and when I’m happy (this can take a while) I unleash them on a sometimes unexpecting audience. Speaking as a happily childless singleton, with the exception of my cat, my poems are my babies.
I can be quite obsessive; to paraphrase Byron: I spent the morning deciding to take out a sign. Then this afternoon I put it in again. I really, really care about my poems. I used to get terrible stage fright before performing my poems, but now I love it, seeing the audience reaction and getting feedback, finding out what they thought.
Even so, I still get the nerves before performing my sign language poetry to an audience – will they like it? Will they hate it? Will they understand it?
I think that’s normal enough, and I have sometimes wondered what my poem would look like in another language. Again, probably normal enough.
But then, someone asked my permission to take one of my beautiful, lovingly crafted poems, and give it to a bunch of artists, some of whom don’t even know sign language, just to see what would happen.
I said yes.
I had second thoughts when she said she wasn’t going to give any of them a transcript of the poem unless they asked – how could they appreciate the poem if they didn’t understand it? But then, as she explained, she wanted them to take the poem however they wanted. At face value, with or without a transcript, their choice, and just see what, if anything, it inspired them to create.
And I’m fascinated. I may be a bit of an art pleb in that I know what I like – and I like art that actually looks like what it’s trying to represent. But how do you represent a sign language poem? It’s hard enough trying to transcribe one into English. How the heck do you express it in art? I wanna know.
And for that reason, I can’t wait to see what happens, and what these artists create. I can’t promise I’ll like it, but this project isn’t about pleasing me as the poet. It’s about Art.
I love the idea of this project, it has my wholehearted support and I’ll be first in the queue at the gallery to see what all these artists made out of my poem!
But you’d better look after my baby. 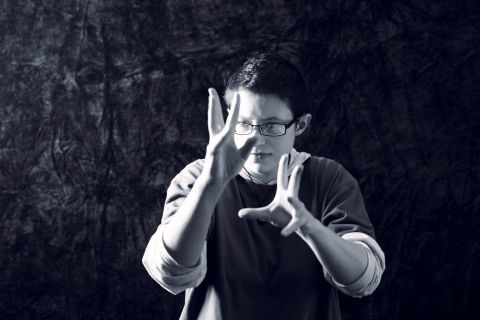 STARTING ART WORK by Fliss Watts, artist of the People of the Eye collective

It’s quite unlike anything I’ve done before so I’m feeling very tentative at this point – also though I am involved under the label ‘visual artist’ I am quite a verbal person and think of myself as tending to a literal rather than an imaginative response to the world. My artwork is often a straightforward rendering of what I see – but this kind of approach does not seem applicable here.

As a non-signer, I am somewhat concerned that I may end up responding to the written notes and pictorial backdrop supplied by the poet as much as to the signed poem. But we will see…

Use of facial expression in a conscious way as part of the language rather than as an unintentional element of ‘body language’ – If spontaneous body language is drafted into SL is there another space for the spontaneous (unconscious) subtext it expresses (which may be quite distinct even opposed to spoken meaning)?

Learning SL v learning speech – when speech is audible the speaker can experience their own utterance in the same (or a very similar) way as they experience that of others and as their hearers experience it, but in SL there seems to be more difference between the viewer’s experience and that of the signer (I know that my sense of my body movements is not well correlated with what other people’s movements look like from trying to learn tai chi (without mirrors)). Is this difference real? and what are the consequences if so?

Another aspect is that speakers of SL seem to have to pay more attention to each other than spoken language users. I can listen without really relating to the speaker’s body/face much…

1 April Possible applications of some of the above.

I’m thinking about the layers of meaning – intentional and unintentional – and the potential conflict between what is expressed at different levels. In practical terms I might approach this literally by layering drawings using overlays of tracing paper.

Another idea follows from the speaker not seeing their own speech (or at least not easily or in the same way as the audience) – again a very obvious way of applying this is drawing without looking at the marks being made, so one’s experience of the act of drawing is perhaps more internal and bodily than visual. This is a common drawing exercise but it might be a starting point for something…

And I realised today that I had, without conscious thought, decided that drawing was the appropriate medium for this project. My conscious post hoc rationalisation of this decision is that drawing is closest to sign language in the immediacy of bodily gestures (and drawing is my comfort zone so it compensates for the feeling of not knowing what I’m doing!).

All of the above is a rather abstract reaction to the medium of SL but I have also been thinking about the specific poem I’ve been assigned – ‘Home’ by John Wilson. And the first powerful impression that has lingered is of noise. So here’s a preliminary scribble (‘White Noise’)…

Lastly some thoughts on blogging: I have some worries about thinking aloud like this at such an early stage – while it’s interesting to see how something came about if the thing itself is of interest I’m not sure the genesis of what might turn out to be nothing much should be exposed to view. Also I tend to think that visual art works should speak for themselves, so you don’t want to prejudice the viewer with unnecessary info about what the artist was thinking or aiming at when they were making it.