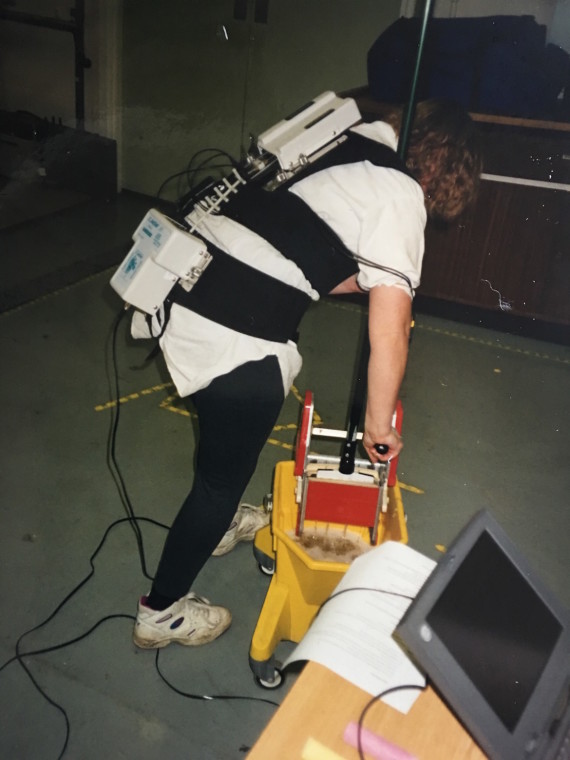 Val and I have been preparing for the first Focus Group we will run at Firstsite in a couple of weeks. The Focus Groups are an essential part of the Postures of Making project, as it allows us to gather a wider range of experiences from artists that in turn will inform the project development. I have been wanting to find out more about Val’s work as an ergonomist so we took time for a Q&A.

NN: What is your educational background?

VW: I gained a degree in Psychology from University College Dublin, Ireland in 1989. I then went on to complete a Masters degree in Environmental Psychology at the University of Surrey. While doing this degree I became interested in the area of Ergonomics, it was one of the modules on my course that fascinated me the most – I remember my first assignment was to conduct an ergonomics assessment of a telephone box!

NN: So what did that involve  – as it’s such a small space?

VW: The first thing I did was to go and make a call in the telephone box in order to think through the whole process, each step I needed to take to make that phone call. At that time telephone boxes were much more highly used. I measured the door and considered any access issues and thought about groups of the population that had not been considered in the design. The telephone boxes back then had a very heavy door with a half-cup handle that was difficult to grip. A wheelchair user would not have been able to use the telephone box, as there just wasn’t enough room. Even if the door could be opened, it would have been incredibly difficult to reach the telephone receiver. Accessibility wasn’t regarded as such an important issue in 1989; it was just starting to appear on the horizon as something that should be considered. If you were a parent with a pram it had to be left outside, and the door was difficult for older people or those with less strength to pull and hold open. I also looked at the height of the telephone in the box and the weight of the bulky telephone receiver that was quite heavy so again if you had any physical limitations you may not have been able to use it. I also looked at the space between the number buttons and the size of the buttons to compare to anthropometric data on finger sizes – were the buttons large enough to hit just one button at a time or were they too small for efficient use? I also thought about the presentation of information on the wall that gave instructions on how to use the phone, emergency and directory enquiries numbers. I really liked exploring aspects of usability, physical ergonomics and access issues.

I subsequently worked at The Robens Centre for Health Ergonomics at the University of Surrey for 18 years conducting consultancy work, applied research, training and lecturing.

NN: What was it like working in the research department?

VW: It was incredibly interesting, some people worked in the lab, others were out in the field conducting in-depth research projects and I worked in the office ergonomics consultancy team, responding to the requirements of the Display Screen Equipment Regulations.  These were published in 1992 when complaints of repetitive strain injury were increasing. The team went into office environments (e.g. newspapers, data processing centres) to assess tasks and workstation set up with the users. We also provided training – teaching employees and managers how to assess and set up their own workstations.

VW: We did see similar issues in different workplaces regardless of the work people were conducting. Although the work content, control and demands of a journalist are different to that of person carrying out data processing work, the physical requirements of the job were often similar. The work was kept interesting with the continual changes in technology, and we were also seeing the evolution of the appearance of the office. At the start, the box computer monitor required a deep desk, which is no longer the case; there were few input devices, the keyboard was the main input device and the mouse was not a feature of the workstation. There was a move from small offices to big open plan offices, and work changed with the increasing use of email. People were emailing the person next to them, rather than standing up and walking a few steps to have a conversation. It changed work dramatically; people were staying at their desks for incredibly long periods of the working day. After a few years with this group, I became more involved in research and conducted many short research studies in a wide range of workplaces. These studies often required workplace observation and assessment and then further exploratory work in the lab.

NN: What was the lab work? What did the lab look like?

VW: Our labs were big spaces, with lots of weird and wonderful equipment, e.g. submersion suits, a treadmill, a large stadiometer which is an anthropometric measuring stand – it took up nearly a quarter of the room! Height and weight information is generally collected in most lab studies, but this allowed all limbs to be measured and then compared with anthropometric data from other working populations. The lab was a place where users were studied in detail doing their normal work tasks. With the cleaners, we studied their 3 main tasks – buffing, mopping and vacuuming. Buffing and mopping tasks were conducted on the hard floor of the lab, and we used an adjoining meeting room for observation of the vacuuming task. We used lots of different measuring equipment to investigate what was going on in the body while working – a lumbar motion monitor to investigate the flexion and rotation of the back, wrist goniometers to explore the flexion/extension and deviations of the wrists, and heart rate monitors to look at the demands of different aspects of the work. We also asked users lots of questions regarding the task, their perceived rate of exertion, their estimates of force required to conduct the tasks, and any pain and discomfort experienced. We looked at hand grip strength and compared this data with the forces required to operate levels and controls of the equipment.

NN: How did people find being ergonomically studied/observed like that?

VW: Most people really enjoyed talking about their work in all the workplaces we went to. In the lab, workers were fascinated by all the equipment we used to observe them and collect data and were really enthusiastic.