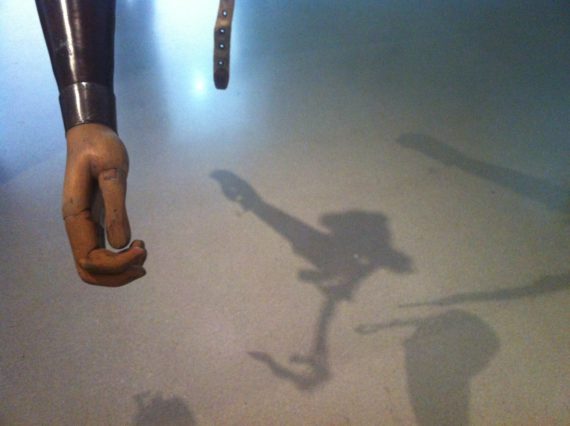 The Body Extended: Sculpture and Prosthetics is a fascinating exhibition at the Henry Moore Institute in Leeds. It’s my first visit to the institute and it’s well worth the trek from Norwich by train. The exhibition combined historical prosthetics with artworks which reference or extend the idea of prosthetics into the realm of sculpture.

From the outset the historical references are thought provoking and lead to reflections about how the prosthetic objects are designed to serve individuals. There are two examples of complexly constructed prosthetic arms suspended in the first gallery space. Their appearance defines them as historical objects, and the absence of any locating body also places them in a sculptural context. The materials look hard and unyielding, uncomfortable and unfamiliar, and yet perhaps necessary to withstand wear and tear; the stresses and strains of compensating for a disability or absence on a daily basis.

Origin mid 16th century: via late Latin from Greek prosthesis,
from prostithenai,
from pros ‘in addition’
+
tithenai ‘to place’.

The role of the prosthetic is to improve function and mobility. In some cases prosthetic design was driven by an ambition to normalise, to make physical differences acceptable (see On Giants Shoulders from 1979) or to facilitate a return to working life. The exhibition contains an official set of  Ministry of Information photographs which include disabled solider Mr T G Phillips engaged in his war job operating a lathe with his own artificial arm in a factory producing artificial limbs. 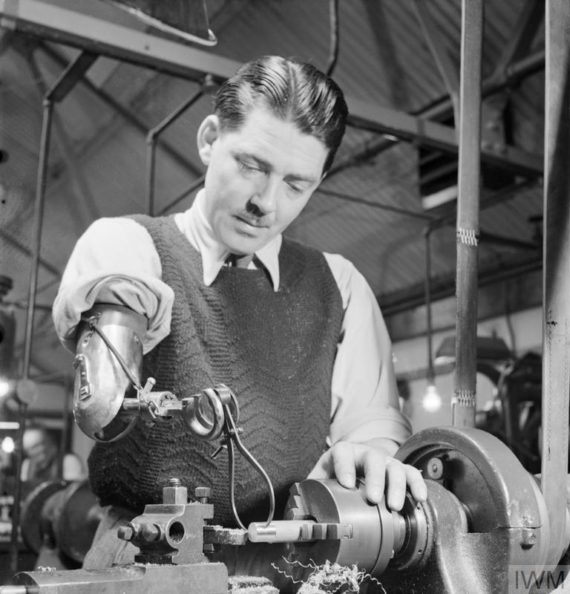 It makes for a neat and inspiring story, but it’s important to note who may be missing in these narratives. The exhibition presents us with fragmented bodies, sections, slices, pieces once broken now fixed or patched up. What is left to our imagination is the fragmentation of the psyche of soldiers returning from war, perhaps physically unharmed but in need of an internal emotional prosthetic to support and enable.

Yael Bartana’s animation, Entartete Kunst Lebt x (Degenerate Art Lives) (2010)  presents men, soldiers, with varying degrees of physical disabilities moving forward in some kind of formation. Their movements are facilitated by a variety of prosthetics: at first it seems as though each man is an individual, but as the work progresses repetition increases as the figures are duplicated. The animation medium communicates an uncomfortable yet necessary fit between body and prosthetic. Prosthetic as foreign body springs to mind. Despite the jerky movements the men continue to move forward with the audio detailing the materials of their prosthetics accompanied by sounds reminiscent of moving war machinery. Perhaps these men are the machines of war. The noise from the 16mm projector keeps time in the background, rhythmically propelling the characters forward. When the work switches to a bird’s eye view, multiple lines of men are seen advancing as if on a battlefield; but by moving at such a slow speed they become an easy target. The life of Otto Dix and his painting War Cripples, which was destroyed as degenerate art by the Nazis, is the basis of this work. In viewing Bartana’s piece, reflections about today’s battlefields rise to the surface; where increasingly the space overhead is prioritised as a place where wars are won or lost, and where the causes of injury come from a more distant place.

Louise Bourgeois’ Henriette (1985) is smooth and weighty, solid and reliable; visually operating as both part and whole form suspended in anticipation. Close by is Stuart Brisley’s Louise Bourgeois’ leg (2002): made in plaster its surface is rough, far from skin like. The single leg sits on a wooden ironing board, vulnerable; any small interruption would see the it teeter and likely fall to the ground, smashing into pieces. It is this tension between the strength of bodies and their vulnerability that comes across so clearly in the exhibition. Behind these two sculptural forms are photographs from three Rebecca Horn performances: Unicorn (1970), Moveable Shoulder Extensions (1971) and Finger Gloves (1972). In each photographic document the figure in complete and contextualised within an environment. Each body is extended upwards or outwards, taking up more space. The sculptural prosthetics appear dynamic, strong and balanced; but come from a period when Horn’s own body was in need of significant recovery. Suffering from lung poisoning brought on through unprotected working with polyester and fibreglass as a student, Horn lived her early 20s in a sanitarium. Her physical body put at risk through the process of art making, the prosthetic artworks she made over several years during and following her recovery bridge the spaces between vulnerability and strength.

There is much to take in and digest from this exhibition and I am left with more questions than answers. It’s on until Sunday – do go and see it if you get the opportunity. 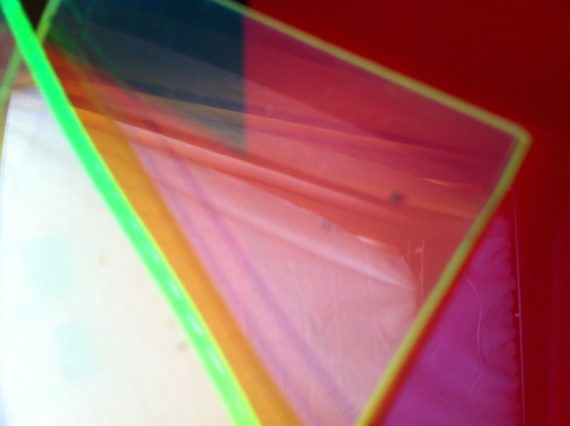 I’m posting this a bit late as Anna Townley visited my studio a couple of weeks back now. It’s really interesting to host two studio visits in a week; each person brings their own responses based on their own practices and lives. Anna and I spoke of entirely different aspects of the work in progress: Tai Chi, colour, curvature, containment, and double images. In contrast with the first studio visit with Dominique and Polly, I noticed how we lingered on quite different slides in the digital sketchbook and different maquettes. We talked about how we view what we see as the contained nature of science, how studies and research questions are clearly defined. In art practice the same focused start may be the origins of a project; but at some point an external element, a notion and idea left of field, becomes something which must be explored. Does scientific research have room to accommodate these compulsions to deviate off course? Anna and I talked about how art practice simply isn’t as contained as science, and it’s interesting then to think about how art can be used to inform scientific research in addition to engagement and dissemination activities.

I plan to work with perspex; and am getting familiar with its qualities, opacity and transparent, its hard unyielding surface and how this works with the subject matter I am trying to explore.