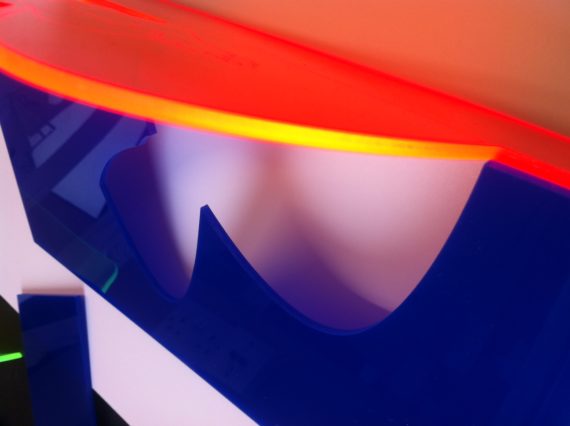 Clearing and cleaning had the desired effect, and I felt suitably prepared for today’s visit from Gill Hedley. I ordered some prototypes at the beginning of the week and collected them this morning; they are the cherry on the cake of all the work I have produced so far in this project. The orange fluorescent edged acrylic is a joy to behold, and the opaque electric blue with white filled etched line work is also very seductive. These are the first two samples of many that I need to have manufactured over the next two months; these two pieces have moved the project forward to such an extent it feels as if it has entered a new phase. It’s exciting and invigorating. The prototypes are modest in their size, and I’m well aware that scaling up can be a complex endeavour and one which needs careful consideration. Going forward selecting more images to work with will allow the project to develop further, with two studio visits to two very different practitioners next week I hope to have plenty of material to work with. The conversation in studio the today brought ideas of projection and using vinyl into being. I feel quite attached to making sculpture for this project, but continuing to experiment is also important.

Adjourning to a nearby cafe to talk further, it was useful to have some distance from the work. Gill and I had a discussion about possible venues which brings with it a shift in my thinking; this projects moves from being research and development into something that will be realised for public consumption. I am feeling it’s important to consider the main points of reference for the project. After studio visits last month I spent a few hours drawing up a diagram of possible areas of the project I want to focus on. I haven’t reviewed this work yet and so that could well be a useful activity to undertake over the next few days.

At times the work feels far from ready but perhaps, after today, not quite as far as I thought it might be. The task of starting to figure out the type and scale of exhibition spaces that would suit the work is good at focusing the mind. 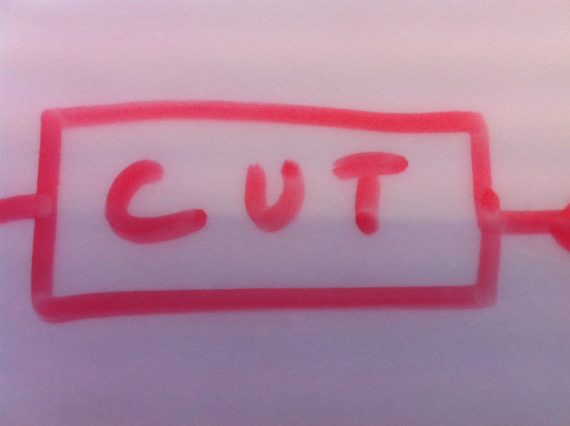 There was some time for studio today – exploring the translation of research into artwork. The focus is the first case study – Finger Collars. Val and I have been re-exploring a piece of work from 2003, and despite the time between then and now it feels an entirely relevant piece of work of be exploring. The second case study will be based on an artwork I produced earlier in the year which is due for launch imminently. The two work are quite a contrast; the resulting case study documents may be given similar or different treatment methods in order to form the findings into artworks.

The visual work is feeling a bit tricky today, a familiar feeling in every project; extracting the work that will be exhibited from the mass of research and experiments into a form I’m happy with can be a challenge. Currently the project feels like a solid lump of stuff, but if I keep turning up and paying the lump some attention it will start to yield, and once that process starts there is usually no stopping it. I’m starting by turning document text into a diagram; it’s taking time and looks a mess – great – I must be getting somewhere. The project curator Gill Hedley is visiting next week, and I am tasking myself with getting a set of ideas as clearly articulated as possible. It feels a challenge, as usual, working in a process orientated manner always involves this. It is inevitable, as inevitable as the work finally emerging when i may least expect it.