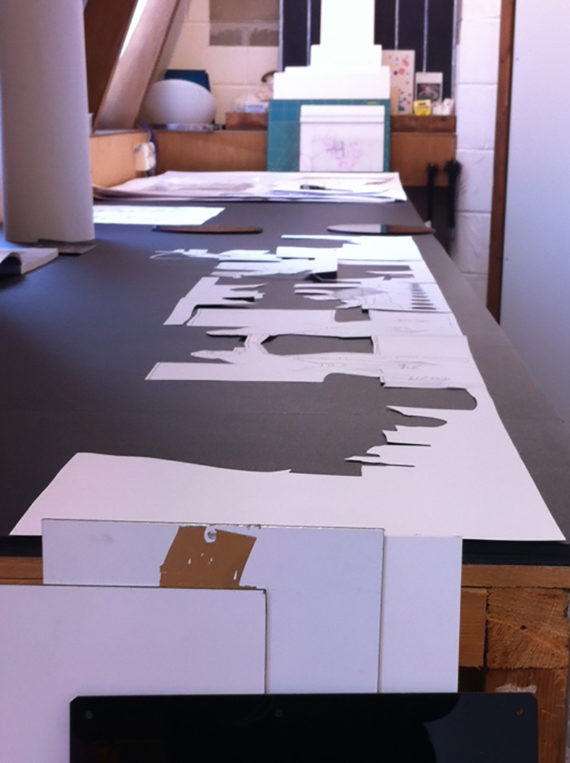 Studio visits are reflection points: with the holiday season spent totally ignoring my practice, getting back to the studio and looking at the work I have produced was a welcome activity. Periods of inactivity can allow us to acknowledge what we have done and what needs to be done. Last week Harriet Loffler, Curator of Modern & Contemporary Art from Norwich Castle Museum and Art Gallery, visited me in the studio. We spoke of the project starting point, of collaboration, material and fabrication choices, of the forthcoming shows at the Castle and a reference to the Bayeux Tapestry I have been pondering.

Thinking, writing, drawing, research and material play are all activities which need at some points to be open ended – oddments of ideas which can feel isolated and un-tethered to anything that has come before. But when these ideas are aired, some of them anchor to works already in existence and the project extends. When sharing works in development, questions pertaining to material or fabrication choices, for example, can help to solidify the choices which have already been made, whilst prompting questions about others. There just isn’t time to do everything and so reflecting on what demands attention is an important skill to develop and trust.

The thought I had about the Bayeux Tapestry was actually a memory of a single image of King Harold being shot in the eye with an arrow. I couldn’t quite remember if it is a record of the battle of Hastings in 1066 (turns out it is) or who made it (it was a professional workshop production being some 70 meters long by 50 cm tall) (1). Sharing with Harriet this single image held in my mind’s eye, feeling unsure if it was important or not, and if it was – in what way, opened out a new approach to the drawings I am developing. The construction the Bayeux Tapestry uses several pieces of fabric, each being embroidered with a scene detailing events from the accession of Edward the Confessor to the defeat of Harold at Hastings (2). The images I have been developing, apart from a very small number of paired drawings, are of single figures, and I wondered if I might consider collating them into several larger works. I have to question what would lead me to put them all together. The subject of the drawings reference different art making or designer maker postures, but what would be the connection beyond that? Where is the narrative and is one required?

Through the conversation with Harriet it came, perhaps it was a relatively simple revelation: that I am the connection between all these images. The project is largely of my orchestration, with the ambition being to collect the research resources needed to work up new visuals. Could I be the connection between all these people, and in so doing influence the ways in which the work is assembled and the images integrated? Being present in the work is not normally a place that I occupy; more often than not I fragment my own image or remove myself entirely. In this project I took the unusual step of using my own complete image in two case studies as Val and I developed a collaborative understanding of each other’s approaches and practices. Further I find there is there a possibly in this work that I could be the linchpin in this work; the pivot for the images I am creating. Reflecting now these ideas link with conversations I had with Gill Hedley in late November, and the project begins to take a form to test out in the world of exhibition proposals and applications.

There are times when the studio needs quiet and the artist needs solitude, but also essentially at some point the work must be opened up for comment and questioning, and if this can happen in the development stage so much the better. There is no doubt about it, its good to talk.

1. Although the Bayeux Tapestry was a professional production, throughout the nineteenth century it was attributed to Queen Mathilda, wife of William the Conqueror. The queen was presented as an exemplary embroiderer, working with other women in private and for her husband’s glory, not her own. George Elgar Hicks painted Queen Mathilda with the Women and Saxon Maidens with the Bayeux Tapesty in 1899.

Taken from Rozsika Parker’s The Subversive Stitch: Embroidery and the Making of the Feminine (The Women’s Press, London, 1984) p. 26 and plates page which follows.