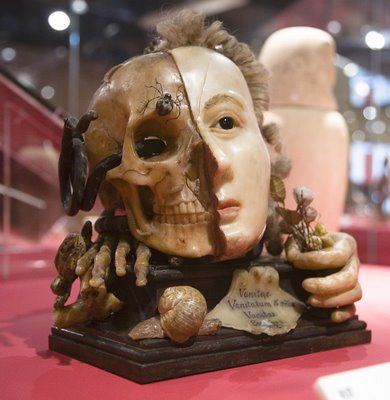 I arrived back at uni after a weekend trip to London, where, among other things, I’d paid a visit to the Wellcome Collection. I’ve long been aware of the Wellcome Trust’s commissioning programme and their affiliation with the artworld, however, I was still pleasantly surprised to see the extent to which the art was integrated into the museum.

Henry Wellcome was a 19th century medical practictoner and philanthropist, who had collected widely throughout his life and amassed a museum-worth of artefacts. The exhibits addressed various elements of historical medicine, usually focusing on the ritualistic nature of ‘other’ cultures. However, despite the affinity with Victorian Curiosity Cabinets, it did highlight strong links between the nature of ritual, belief and medicine.

First supervision meeting
Having scheduled a supervision meeting for mid-week I was keen to share my latest interests with my supervisors. We discussed some of the content of my research and how it related to the Wellcome Collection as primary research for study. Will Rea, my co-supervisor, specialises in art and anthropology, so was interested how far I might want to pursue that thread, particularly in relation to the connection between science, religion and magic. This was consolidated after mentioning my previous reading on Primitivism, and he recommended some follow up reading of Wittgenstein on Fraser and texts on the anthropology of religion.

As I’d prepared some work in the vitrine in the corridor, we went outside to look at it and decide how it could evolve. I’d already considered opportunities to build on the ideas within the mind map to create wallpaper works. However, through discussing the possibilities of the work, I identified yet another strand to my project. I had considered the form (practice) and content (theory), but realised that I also needed to address the contextualisation of my work within the work of other practitioners and academics, so I resolved to research artists addressing similar issues and began planning which objects to include in my display.

The Wednesday art lecture
One thing in particular I’m enjoying about being back in the university environment is the countless opportunities for learning and discussion. The faculty has a thriving post graduate environment with regular talks, lectures and forums. This weeks lecture was by Judit Bodor, who had also curated the exhibition in the project space downstairs with visual artist, Emma Bolland and photographer Tom Rodgers. She began by outlining a history of curating and the changing role of the curator, from the pre-60s model of a keeper of art, through to curating as an artistic practice in its own right.

I was particularly drawn to the phrase ‘critically self aware curation’, or ways of representing reality that considered the nature of cultural capital and inclusion. Engagement and interpretation strategies were also intrinsically connected to the dissemination and distribution of the work, and Ric Allsopp and Paul O’Neill were two of the researchers mentioned who were working to address these systems of representation and reception in art.

Curating as a creative practice
Bodor’s projects tend to exploit the idea of the site, not just in relation to the exhibition space, but also the political and social history of the region. The first of these mentioned, addressed the concept of networked practice and took place in her native Hungary. Her experience within this genre came from working with an artist-led mail art archive at a time when Eastern Europe was still in the grip of Communism. This obviously had an impact on the nature and size of the work that could be sent and received, and it was interesting to consider the archive as an installation in that context.

A journey through her archive of curatorial projects led us to her most recent one ‘…milky way you will hear me call…‘, a project based on David Peace’s fictional reimagining of the hunt for ‘The Yorkshire Ripper’, Peter Sutcliffe. The project uses fragments of David’s text as starting points to ‘blur the boundaries of visual practice, curatorial intervention, research, documentation, fictional, and theoretical writing.’ After a brief introduction, we went downstairs to enjoy the show. (The white chocolate buttons at the opening were a nice touch too).