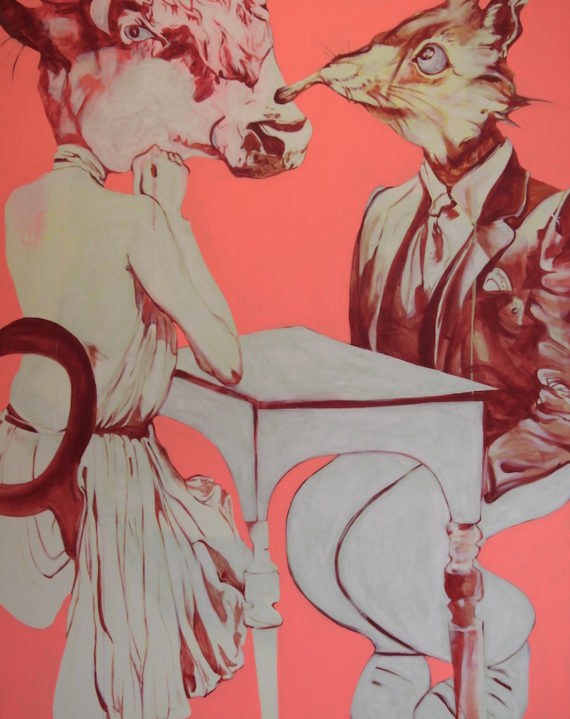 Before I talk art I want to focus on inspiration. Two of the things that make me smile most in the world are drawing and walking, both allow space for ideas and wonder. The first thing I did when I arrived at the residency in Ireland was to go for a trek around the mountains of Kerry with my camera, on a hunt for animalspiration. I encountered many families of cows and calves and became fascinated by them, taking the time to gain their trust allowing them to venture curiously closer.

Animals are a huge part of my work. The painting ‘Plenty of Fish’ that won me my place at the residency depicts a cow in a dress ,on a date with a mouse like man, in a way you could say animals are the reason I was fortunate enough to be here.

Being in a landscape devoid of a city girls daily sensory information i.e buildings, traffic, noise and movement, you become acutely aware of your own presence. The cows I encountered react and communicate on a sensory level far more delicate and calm than my own city energy, so to take the photos above I slowed down, spent the time to present myself as non threatening and I even had a conversation or two with them.

I found that many of the calves had different personalities and levels of confidence as they took it in turns to explore this strange two legged oddball crouched down observing them. The mother cows stood a little back, calm but wary and on a couple of occasions, when a calf got a little too close for comfort she would warn them back with a swipe of the head to the forequarters. It was very much like observing a human mother telling off a toddler for overstepping the mark. And in the same way the human child is ever testing the boundaries, so is the calf.

I suppose I use animal imagery in my work to understand what it is to be human, or at least to illustrate a human feeling or condition. The  characteristics of animals and our judgement as a society about a species worth, acts as a tool to explore human emotions through the indirect symbolism each sentient being is marked with. By blurring and merging animal and human features in a anthropomorphic fashion an image can end up being interpreted and perceived in many ways and this excites me.

Below are some of my first drawings from the residency in Ireland. Having the luxury of a month void of distractions and the day job, I wanted to focus on experimenting with different images and media without the anxiety and pressure of working towards anything in particular. These drawings represent random thoughts and the simplicity of going with the flow.