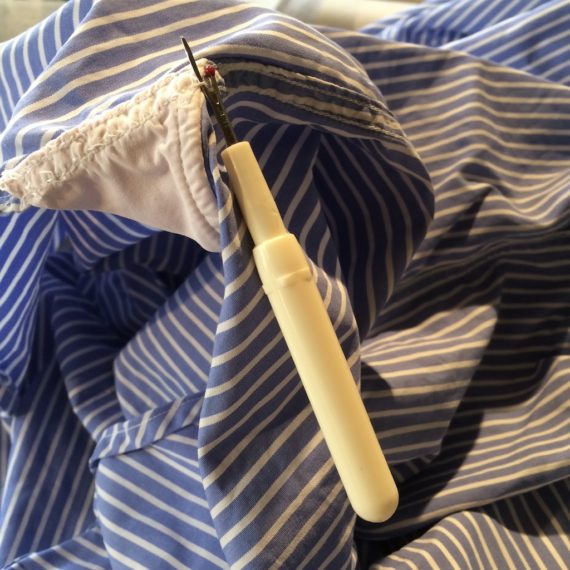 Wednesday afternoon and a good deal of Thursday morning were spend wrestling with the seams of a particularly persistent shirt. It is one that I recently found in a box of various material, I am pretty sure that I bought it in London (more than likely before I moved to Sweden). I had already taken the label out so I do not know who made it, with its tidy rows of tiny tight stitches I assume that it originally came for a good quality shirtmaker. This was confirmed when I finally got to pressing the pair of front sections – under the heat of my old stream-iron the fabric took on qualities of smoothness that I cannot describe, needless to say running my fingers across the cotton was sheer pleasure.

Spending so long unpicking almost every stitch individually is rather meditative. I need to stay focussed so as not to accidentally tear the fabric folded around itself and up to three layers folded into the joint between the front, back, and arm. The stitches are so small and tense that it’s difficult to wiggle the point of the ’quick-unpick’ between fabric and thread. Tackling the seams where the front joins both the yoke and the collar (with its stiffened interface causing its own challenges) is easier on one side than the other. I realise that it has to do with the angle and direction that I work with the quick unpick in my right hand. As an experiment I try holding the quick unpick in my left hand when it comes to the trickier side. I am surprised, and pleased, to discover that I am able to work left-handed! It’s a bit slower but far easier, and I enjoyed training-up my ambidextrousness.

I have been intrigued by left-handedness for a long time. My father is left-handed and I remember being disappointed and a little confused when I learnt that being left-handed is a dominant gene* that I ’should have’ inherited (similarly his brown eyes). In the first term at Dartington we had sessions in freeing our drawing skills, one of which was drawing simultaneously with both hands – my symmetrical pattern was even and well balanced. Several years ago I began occasionally using my left hand to brush my teeth and then regularly to stir my porridge (not at the same time), and more recently I have been whipping cream left-handed with not too messy a results.
I am intrigued by the potential to be ambidextrous, there is something appealing about the balance that is suggests. Does it have anything to do with my practice? Perhaps it will enable me to work more efficiently with more than just an awkward stitch or two.
I think we might have received an over-simplified summary of complex inheritance patterns concerning left-handedness in our year eight biology class. 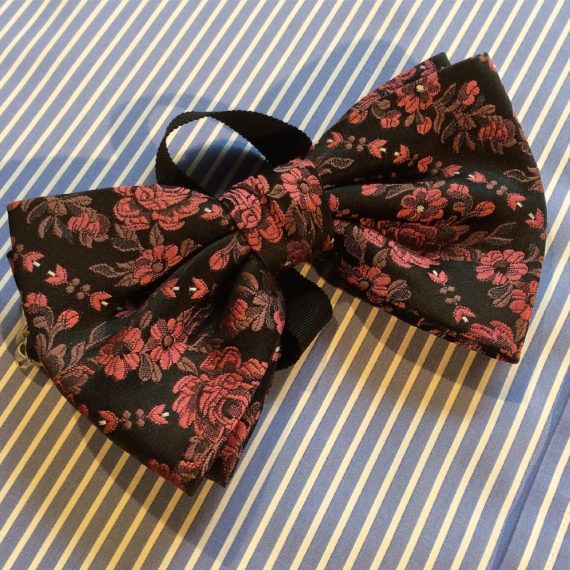 Another artist at the studios popped in on Wednesday to say hello after not having been there for a while. He saw my collection of ties on the table and offered his that he “will never wear again.” On Thursday a handsome bag of ties was waiting for me. There are certainly some that fit with my current work, the question though is what to do with those that do not.
Drawing-out the ties one by one eventually revealed two bow-ties, one a splendid 70s/80s creation in black dark rose and white polyester. That particular tie touched something in me. It spoke of parties and dances, of getting dressed up and going out, of spending time with friends and family. For a brief moment I almost caught a glimpse of someone else’s life.