Wednesday: I set off for Uppsala with enough time to see Alvar Campo’s installation at the museum (and pick-up the second light and tripod) before the committee meeting at the artists’ club. 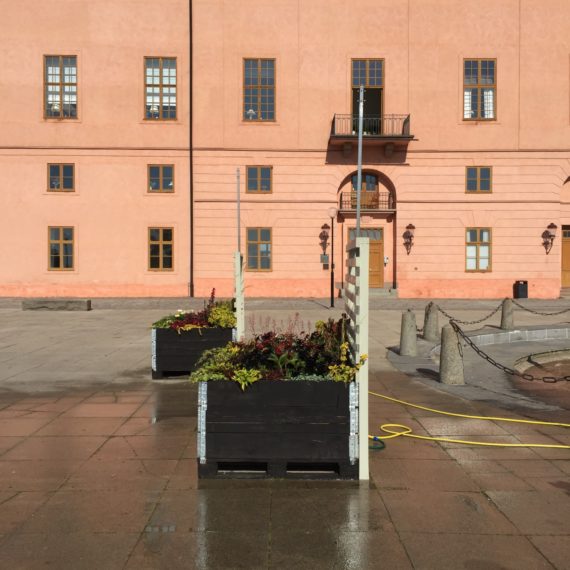 The Observatory (part 1) The Measure of Change, Alvar Campo, 2020

The installation is in the courtyard in front of the museum. It is (I later found out) a compromised version of the original proposal – perhaps that is why it is ’part 1’. On the hour a fine mist is released from a series of poles creating rainbows over a pond and between banks of colourful flowers. When I read the press release about the piece it reminded me of my idea for a proposal to Norrtälje’s annual outdoor exhibition which also features manufactured rainbows. In addition to the outdoor installation Campo was also showing a model of the full project and several other pieces in one of the museum’s ground floor galleries.

Two other of his works immediately resonated with me. One was a video of a portable projector screen that captured the play of light falling through trees in a forest. Earlier in the week I had mentioned to a work colleague that I had a number of similar screens and that one day they would become some kind of installation. I cannot remember how it came up in our conversation at work but seeing Campo’s untitled (cinema vérité) gave me pause to think about synchronicity. The second work The Archive (in two parts) invited visitors to make patterns with compost in clear acrylic trays on an over-head projector (the resultant image displayed on another collapsable screen). Many years ago I showed a work where people were invited to stir plant specimens floating in a tray of water on an over-head projector. It’s a piece that I had forgotten about until seeing some of those same materials in a very similar situation.

I noticed a woman sitting on a bench in the gallery, she was writing in an orange notebook. She finished her writing, closed the notebook and stood up. As she did so a man entered the gallery – it was the artist, he had been pointed out to me earlier by the museum director who I had met on my way across the courtyard. By chance I was sufficiently close to the woman to be included in the welcoming ’hello’ that Alvar beamed towards us – it transpired that he thought that we knew each other. After clarifying the situation and short introductions the three of us began what turned out to be very interesting and wide ranging conversation about Alvar’s work, artistic processes, and the challenges of finding a good studio. The other artist – Anna – was visiting from Stockholm but was familiar with Uppsala and even Enköping as she grew up in Västerås (a city the other side of Enköping). We must have chatted for about 45 minutes, suddenly it was four o’clock and my last chance to see a rainbow before having to leave for the committee meeting. Alvar accompanied me outside and with what must have looked like very peculiar movements to anyone watching we searched, crouched, and stretched for the best vantage points to appreciate the rainbows.

A few minutes later Anna joined us along with her friend Natasha who already I knew both as a member of the Haka artists’ group and as the education officer at Uppsala Art Museum. After a summer in ’sleepy’ Enköping it felt great to find myself in the company of other artists and enjoying the exchange of ideas and stories as well as catching up on those small everyday details of life. Walking alone across town towards the artists’ club I felt a kind of comfort and belonging that is a little too rare in my life. But then I guess that I am far from alone in missing these interactions(?) in the current conditions. The problem (’challenge’?) for me is that I was already rather socially and artistically isolated even prior to the coronavirus. Not surprisingly I found myself re-running the pros and cons of moving to Uppsala … of moving to anywhere with an active arts scene.

Friday: I spend the morning finalising the Meetings programme for SUPERLOCAL – the local version the Supermarket Art Fair. One of the meetings questions is who are artists’ initiatives are really for? Two meetings tackle issues arising from the corona pandemic, and one engages with the artist’s role and the politics of representation. In the afternoon I work on the Uppsala artists’ club’s activity (’business’?) plan for 2021.

Saturday: Toward the end of one of our regular lengthy Skype chats a very good friend made a good suggestion for an alternative kind of Glitter Ball activity. I had been expressing my frustration and disappointment at being unable to see how to precede with a programme that is meaningful (and achievable) for both me and the participating artist(s). Kim’s suggestion was artists’ dinners – revised to artists’ lunches to recognise my preference for daytime events.

The Covid19 guidelines issued by Sweden’s national health authority in the spring remain the same for the foreseeable future. Paramount is social distancing specially indoors, and this makes it impossible to run events in a room of less than six square meters. If the exhibiting artist and I are in the space then we can only welcome one other person to join us. While this might offer a truly exciting and intimate encounter in some galleries it seems wholly inappropriate for Glitter Ball. Glitter Ball’s visitors tend to be groups of the artist’s friends, and/or the artist’s family, who have made their way to Enköping, and older couples who I know through the town’s Art Association. Even if I were to offer these distinct groups the option to book viewings on the day that should have been the opening party I don’t have the time to do the necessary administration. If I stand at the door and implement a simple one in one out policy not only do I miss out on being involved but I create a potentially far from relaxed situation for both the artist and the visitor.

I am going to give the Glitter Ball Lunch idea some thought. There are so many things to think about, not least that the lunch would have to be somewhere other than the showroom. I am not certain that doing it in my apartment is viable either.