Monday: Erika and I will be showing in the adjacent galleries at Uppsala Artists’ Club in January. Earlier in the summer we exchanged a few emails and on Monday afternoon we met up for a chat. We had met at least once before at one of the planning workshops that the club held last year, there’s even the chance that we met once in Enköping when Erika came to see a friend’s show at the gallery here. We found a nice cool spot by a shaded window looking over the inner courtyard of one of Uppsala’s oldest coffee shops.

And so it was that we found ourselves chatting about our mid-winter shows on one of the summer’s hottest days. With the seasons being so distinct here starting our discussion about the difference between the current heatwave and how it might be in January was a natural way for us to begin. Erika immediately came across as a sensitive and intelligent woman quietly passionate about her practice and her teaching. I worry that my more overt enthusiasm sometimes gets the better of me and I made a conscious effort to speak slowly and in full sentences. My habit of running away with new ideas mid flow is tricky enough for people to follow in English, I really can’t imagine how it sounds in Swedish! I think Erika was a positive influence on me and our conversation found an even pace with time for both of us to talk through our initial thoughts and ideas.

We are quite different to each other and I think that this will be an advantage when showing so close to each other. I already have definite ideas about what I want to show though this could change considerably over the coming months. Erika listened intently as I spoke about my interest in Eugène Jansson and my recently finding out that he first exhibited his male nudes in Uppsala. Erika’s previous exhibition at the club’s gallery was inspired by water, and if I understood correctly nature and natural phenomenon interest her, though she is not yet thinking too much about what she will show in January. She currently has a large sculptural piece temporarily installed outside close to a former saw mill that is now a crafts and cultural centre a little out of the city.

I needn’t have been anxious about broaching the subject of which of the galleries we will show in. Erika raised the subject and in the same breath said that was interested in the gallery recently created in the total renovation and repurposing of the building. This is perfect as I have been imagining showing in the old (but also refurbished) gallery space. The space will be a challenge for me as it is not ’easy’ – in the ceiling large old wood beams vie for attention with an oversize modern ventilation system, and there is a dramatic change of floor level effectively dividing the room in two. I hope that I will become more familiar with the room over the coming months and I look forward to working out to use it to the best result. Do I have the courage of my convictions for that street facing window?

There are a few practical things that we wonder about, some we will take up with Bookings & Venues group, some we think we will work out by seeing how the exhibitions go this autumn.

Monday continued with another meeting – mid-to-late August is possibly Sweden’s most intense meeting season. With Swedes traditionally having somewhere between four and six weeks of holiday over the summer almost all workplaces, clubs, societies, and associations feel the need to re-group as soon as everyone’s children and/or grandchildren are back at school. My second evening meeting (I had already had two if not three meetings during the working day) thankfully demanded attention rather than active input. Johanna reported on the regional Art Association’s much appreciated summer activities for children, updated us on the association’s successful funding applications and on-going projects, and presented a thorough (and pleasing) economic summary. It was a good and succinct meeting, I think that after such a hot day everyone was keen to get home. I noticed how the sunny was beginning to set before I made back to Enköping – it is definitely late summer.

Wednesday (evening): Enköping’s Art Association meeting. Next Saturday we re-open the gallery after closing it in late March in line with the council’s response to national Covid19 advice. I am learning to live with the disparity of being told the guidelines issued by the government in spring still apply and at the same time that we can and should be opening things that were closed because of those guidelines. I am in two minds as to go to the vernissage or not. The three rooms that make up the gallery are not particularly large, in fact the second of them is particularly small. Nor are the doorways between the rooms wide enough to allow social distancing and a one way system is not viable. I have no idea how many people will be there. Are people desperate for art and culture after almost six months without any? Or have they gotten used to the idea of not visiting galleries, preferring digital and remote experiences?

As we worked through the agenda items I made several suggestions for how we might make other events in our autumn programme more suitable in the light of the corona virus. I think (fear?) that the long summer break has made people more desperate for a return to the old normal and more forgetful of the new normal – a bad combination in my mind.

Thursday: I send out the Meetings programme information to the galleries and artist-run initiatives participating in Superlocal – our small but perfectly formed local art fair for local artists. I still have not resolved the exact room where the meetings will take place but the venue is confirmed, so are the meeting moderators and the topics/themes. I am very pleased to have this gentle introduction to being the Meetings coordinator. Even on this much reduced scale I am learning a lot. It feels manageable and everything that I am learning will really help when things are (hopefully) operating at full international capacity again next year.

One thing that concerns me is the use of words ’cosy’ and ’friendly’ to describe two of the potential meeting rooms. Those adjectives – that to me imply ’small’ – seem quite inappropriate at the moment. I would happy to hear that the rooms are ’cavernous’ or ’sweeping’. I have downloaded and printed out a pattern for a fabric mask. This morning (Friday) I saw a local headline that masks might be recommended in Sweden.

Friday: I spend the day preparing for a workshop that I am running in conjunction with the Inner & Outer Journey exhibition. The show is this year’s Art Takes Place event, last year I exhibited at Källör so nice to be involved in this year’s programme in a different way. 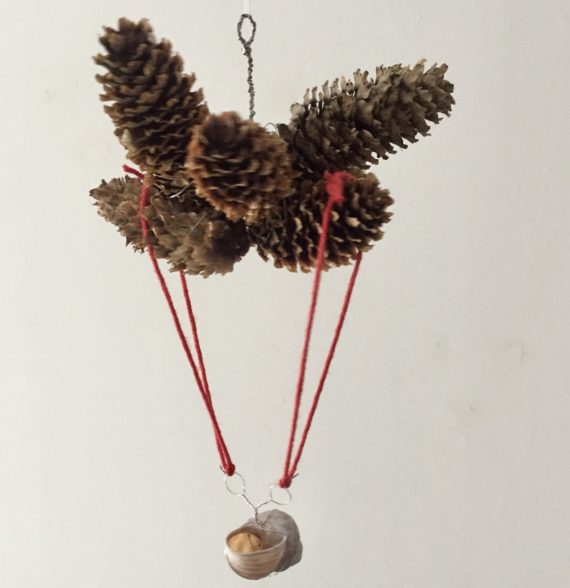 Making a couple of examples of fantasy ’travelships’* from bits found on a quick scavenger hunt around the park by the studio was good fun. I should do things like more often – just play and be creative without too much thinking, or rather think about what the materials offer visually and physically, and see what happens when they are in my hands.

*I might have made up the word but it is so much nicer (more poetic?) than ’vehicles’.