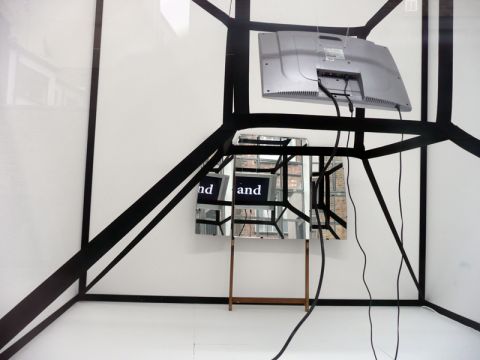 I’m really excited about the prospect of using a player piano to play my chewing gum composition.

Last week I went to have another look at a piano that was given to Susan Walsh , Artist and tutor at UCLAN. After a few months wondering why it didn’t work even though the mechanism seemed fine she told me it had suddenly started working.

Of course when I got there it wouldn’t work and it continued not working for an hour. After much fiddling and prodding and chin stroking we noticed the part that the piano roll moves over, which is a bit like an 88 note mouth organ, wasn’t seated correctly and after a gentle push the room was filled with sound and we sat grinning stupidly whilst playing the tune over and over again.

I’ve spent the rest of the week looking into the history of the automatic piano which has been fascinating (including a format battle to rival the VHS/Betamax struggle) and contacted a workshop which makes piano rolls from midi files.

So I’m really at the point of simply getting on with it and transcribing the gum into notes. This is quite laborious.

At the weekend I went along to UCLAN’s Production line 2011. This is the final show for 3rd years on the BA Music practice course. There were some great pieces performed and some intriguing installations with plenty of crossovers and similarities to some of the concerns and debates within fine art. I was particularly impressed with an installation that included prayers from all the worlds major religions layered on top of each other and a video piece by a second year student exploring language and music in an interpretation os Ginsbergs ‘Howl’ which was described as a reaction to Steven Pinkers assertion that music is auditory Cheesecake.

The Final performance involved most of the students and was a composition created by them and invited artist Andy Chapel. It was brilliant. It began with all the musicians spread around the media factory, 3 floors with an open stairwell and included people rattling peanuts, playing guitars, baning drums, tambourines, tapping things etc. The musicians then led the audience into 3 interconnected theatres where they started doing some musical exercises in groups and after 10 mins everyone congregated in the main theatre and were treated to a 30 min performance of Samba drumming, 2 bagpipes with drummer, piano, guitars, 2 drum kits a barbershop quartet and a finale of those tubes that you spin round to make a noise. I loved it.

Anyway whilst i was there I managed to speak to a few musicians about my chewing gum composition and have enlisted 2 so far to help write and perform the piece. A guitarist called Andy whose just finished the first year of music practice and was involved in some of the performances and Carl guitarist/drummer who just finished the course and who I’d met at a live painting event at a dubstep night organised by 158 projects.

I’m off to see a saxophone quartet perfom on Friday and am looking forward to meeting them and the composer after the show. I don’t really have a fixed idea of which instruments I would like in the piece and it seems to be growing organically as I meet different musicians. i think a saxophone would be a great addition though so hopefully they’ll be interested in coming on board.

I have started developing a project to transform the distribution of chewing gum splats on the pavement into a piece of music. I’m creating visual scores of a walk through Preston with video and photography. Wherever the chewing gum intersects an imaginary piano keyboard a note is recorded. i am hoping to collaborate with a small group of musicians to develop the project further with a view to using other elements of the walk as inspiration for the score – such as the intersection of paving stones, textures, cigarette butts etc.

The project is a development from I print I made of a table which was used for cutting paper. Its full of cuts and scratches and I wondered if it was possible to print it. After inking up the table and taking a relief print onto a sheet of newsprint all the visible sctarches were there plus many others that coudn’t be seen.

On reflection the print revealed areas of unconciously collaborative activity and is a document of the use of this table by hundreds of people over many years.

Whilst thinking about this print I had been looking for other places that contained something similar. Which is when I noticed the chewing gum. This seemed to contain many of the ideas I’d found in the table.

Initially I painted the chewing gum outside the PR! gallery in Preston bright pink as an installation for an exhibition. Further reflection led to seeing the distribution as a musical score such as you might find on a computer sequencer or automatic piano which these sequencers are based on. As a producer of electronic music its been easy to see the potential for translating this into a score which could be performed either by a small group or an orchestra.

So the plan at the moment is to begin working with a small group of musicians and use a walk in town as the inspiration for a collaborative work. I’ll be spending the next few weeks working on the visual score and hopefully enlisting some collaborators.