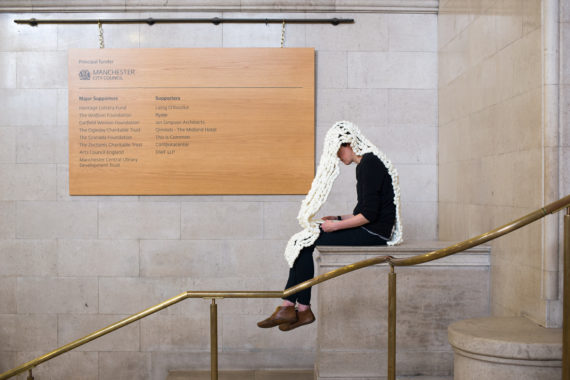 Mr. Andrea Crestadoro, Chief Librarian of Manchester 1864–1879, is credited with being the first person to propose that books could be catalogued by using keywords that did not occur in the title of the book.

“He broke off, and she fancied that he looked sad. She could not be sure, for the Machine did not transmit nuances of expression. It only gave a general idea of people – an idea that was good enough for all practical purposes, Vashti thought. The imponderable bloom, declared by a discredited philosophy to be the actual essence of intercourse, was rightly ignored by the Machine, just as the imponderable bloom of the grape was ignored by the manufacturers of artificial fruit. Something “good enough” had long since been accepted by our race.”

Part of this R&D process is to see how I can integrate my sculptural and performance work within my forthcoming solo project. I want to develop a hybrid of the two.

So far, I have only ever performed in a solo capacity (recent examples here) and I am curious to see how this work might expand. I am testing this in different ways:

Firstly, I have been collaborating with photographer Steve Iles on a commission for Open Eye Gallery’s group exhibition Pieces of You (which runs till 5 June). Rather than just making work for Steve to photograph (too easy!… and besides, we’ve worked this way before, so we wanted to give ourselves a new challenge), Steve and I tried to find a way in which first I and then the photograph could become sculpture, so that both initial performance and final presentation could hold equal weight.

Secondly, I am developing a performance for Progress, a group exhibition that is part of Manchester Histories Festival and will be held at Rogue Studios in the summer (further info coming soon). Thinking about the idea of ‘progress’ as dialectical has led me to wanting to reflect this push-me-pull-you within the bodies of two people, rather than just in myself… At the moment I have no idea what this will look like, or how it will be read, but that is exactly why I’m pursuing it.

I’ve recently taken part in the latest installment of the “Interventions” project at Leeds College of Art. Curated by Catriona McAra, this series asks artists to:

“…re-discover, re-invent and re-invigorate the creative realms of the library. Different strategies are deployed in order to explore the inner territories and outermost reaches of the library’s collection.”

I used my time at the Vernon Street Library to research and develop a new performance piece.  I searched the shelves for paintings of people reading. Amongst the many images I found, two paintings previously unknown to me offered pause for thought.

Mary Cassatt’s “Reading Le Figaro” (1883) shows an older woman reading a newspaper. There is nothing untoward about this until you consider that such “intellectual” activity would have been deemed highly inappropriate for a woman at the time… and yet there she is, reading in full, glorious and conspicuous daylight and neither concerned about being seen nor being recorded. I find myself drawn to the defiance of the image.

Joseph Wright’s “A Girl Reading a Letter by Candlelight with a Young Man Peering Over Her Shoulder” (1760) is harder to read. What interests me in Wright’s painting is not the contents of the letter, nor the girl’s reaction to it, but the tension created by the man’s presence. He is really annoyed that we are there, catching him out in the act of peeking. We are frozen in looking at each other, and in that moment neither of us can read that letter.

I find the tiny moment this painting captures oddly hopeful, because it allows the girl privacy and an opportunity to be lost – even if only momentarily – in a space less oppressive than the one we can see she is in.