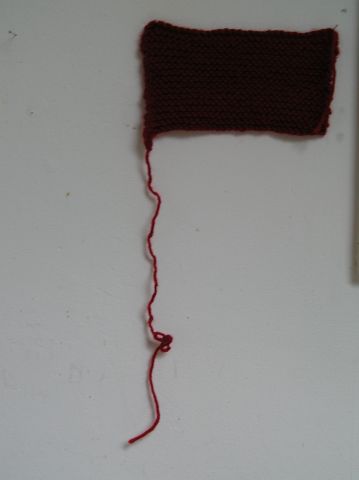 A cumulative performance in which I unravel and reknit the same small piece of knitting each day throughout May. I'm interested in how the yarn changes (frays, splits, crinkles) in the process, how that affects the making and the object itself, how it reflects the accumulation of process in the body; how we mark time, think of time as both linear and cyclical, how we try to hold back time.

So… didn’t manage to post anything more in July – I had to take the ‘month’ away with me, which was interesting – first of all all the logistics of getting knitting needles onto flights (i.e. had to pay for hold baggage just so I could!) – then finding a way to place it so I could photograph it.

I’m still pondering on the fact that, with all the undoing and reknitting, I still end up with an object at the end. Plan to start a project that I’ll just continually unravel and reknit until the yarn becomes completely unusable. I’ll be interested to see how long it takes – though I may wait until after I’ve finished the Year of Waiting, at the end of this year.

I’m now nearly halfway through ‘Knitted Month No. 3’. For this one I’ve knitted a piece 31 rows x 31 stitches, as before, and each day I unravel one row and knit it onto a new piece. The two hang side by side, one gradually increasing as the other diminishes.

In this piece it’s not so much the texture of the knitted fabric that changes – the yarn is only reused once, so it doesn’t really get worn in the same way. But the gradually changing sizeshows the progression of the month.

I’m posting this way after the event, but in March I completed the second ‘Knitted Month’ – maybe this is going to become a series. Still working on the idea of making and unmaking an object at the same time, this time with more of the sense of passing time, I think.

In one way the difference each day is much more obvious – the knitting grows by a row each day. But in another way, it’s more subtle – the changes in the yarn and the shape of the object are less marked because each day new yarn is being added (though less and less each day, as the yarn stretches – by the end I was only using a tiny bit of new yarn as I cast off the last row).

I’m planning the next one now, for May or July – if and when I do more, they will all be done in 31-day months, and all on the same format of a block of 31 stitches x 31 rows (eventually). May is quite a busy time for me, so I might leave it until July.

Thanks for your distinction between cyclicity and transformation – it's helpful because I am interested in both here. In terms of cyclicity, rather than a 'vicious circle', trapping kind of cycle, I'm thinking more of the 'cyclicity' of time in that a pattern of events (e.g. daybreak, midday, sunset, night, or the seasons) keeps returning – but of course never exactly the same (you can never step into the same river twice). And part of the process of that repeated pattern is that the accumulation of those cycles brings very gradual transformations (I'm especially thinking of the body, and aging, here). So I'm interested in how the repetition of a process, which might seem like an endless cycle (knit yarn, unravel it, knit it again, unravel it), gradually transforms the material (body) it's worked on, and that material/body accumulates the 'memory' of all the previous cycles, until it's become something quite different (and often unexpected).

This is the last day, and I'm still not quite convinced I know what the end is. For the time being I'm leaving it knitted, though I'm going back to considering the half-unravelled idea. I always imagined that I would display it hung on the wall, but I think I'm more likely to show it as a sculptural object. It's still quite animal-like to me.