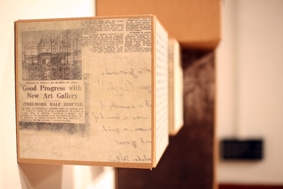 ReCollect is an installation commissioned by The Herbert Gallery, Coventry. Opening in October it is a response to the site of the major redevelopment of the gallery. A walk in assemblage of fervent sketches, noted conversations and collections of found materials will evolve in an aggregating series of large scale ‘memory boxes’ that will move and grow until the exhibition’s end and the completion of the building in March

The short film of the exhibition is now finished. I have drawn a line under this body of work and with time and distance and the help of numerous mind maps, I have a clear idea of where I want to be next with my work. More site specific, more sound based and with the recent opportunity of working alongside another artist, more collaborative. The importance to me of my research has come to the fore and has to be evident in new ways in future projects.

I have a clarity about what I am hoping to achive next, but for the first time in a long time no clear idea of the process or product and that is scarey but very exciting.

The Herbert project has reminded me of my ability to focus, research and visualise and I am giddy at the thought of breaking from the familiar and what is expected from my work, by myself, colleagues and contacts by playing with and pushing projects more.

www.jaynewilson.co.uk is under construction and will include the film and sound and idetails of forthcoming ideas and commissions

January and February saw my time in Coventry step up. With the usual monthly installment to the exhibition plus more workshops and more nights in the Brittania Hotel.

The workshops were challenging with three outreach days with people from the Polish Community. Elders and Mothers and Toddlers …all awakened to the fun and frustrations of monoprinting.

My final trip to the Midlands was a high with a couple of days there filming the exhibition and voiceovers for the DVD and a half term workshop with adults and children that filled the room withpaper and scissors and lots of cardboard constructions of buildings.

The exhibition was taken down last week and returned to my Brighton studio.

We had hoped the gallery would be able to keep some of the work for its permanent collection, but unfortunately being secured so well to the card meant that the work is perishable and so it was all sent back to me intact.

The 5 huge boxes and the multitude of additions filled the studio and I have no choice but to dismantle the whole thing.

I started to cut up the boxes. The feeling of 'destroying' (in some sense) the work is alien to me but refreshing. In losing myself in a world of concentration and focus on what I was doing…be careful not to hack a chunk out of a print. I found myself reaching for a sketchbook to note new ideas for displaying this work in other ways. Half collapsed boxes provided new photo opportunities and ideas for more three dimensional explorations and strong feelings of putting to rest, evaluate and move on to the next project.

Its been a few days since I left that in the studio and have been gathering the sound and photographs for the film. Due to be completed ina couple of weeks.

The value of the film has been emphasized now that the work has gone. The gallery have started their evaluation and I'm about to start mine.

Its a lot to think about. 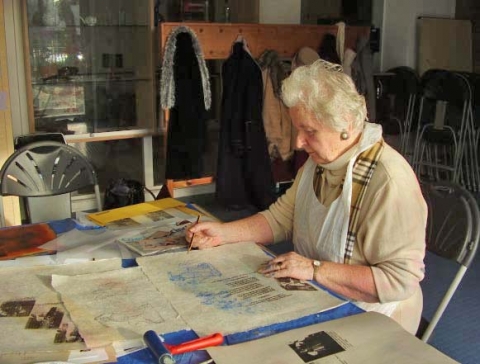 The installation went to plan and I’ve rapidly come to terms with working under scrutinization of technicians and public. With only two more installments of work I’ve had to.

The public contributions are strangely leading to private roads into memories. Not of the Herbert but more sentimental thoughts prompted by names ’I was at school with a Christopher Herbert’

Money has been found for filming the installation. Match funding as a result of sponsorship. A reault. And I’ve been planning with a filmaker how to document the whole project. Exciting. Three short films on one DVD planned to show different areas of ideas and background. The filmimg is planned for February. 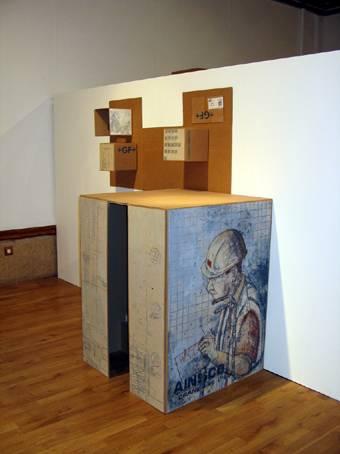 You get a commission. You finish the work. You decide, with the gallery, how to best hang the work in the space. You have a private view and then you wind down while it all sinks in.

I haven’t had much time for a wind down. I am now essentially working in the open instead of the privacy of my studio. I’m juggling alternatives, wondering how I add the next phase of the installation all in full view of visitors and gallery technicians.

I am trying to remember that basically it is a work in progress.

Today’s hiccup? Only having handy access to a new photocopier whose ink doesn’t dissolve with the solvent I’m using to transfer texts. I was saved from complete stress by listening to a musical on the radio. I think this could further change my practice. 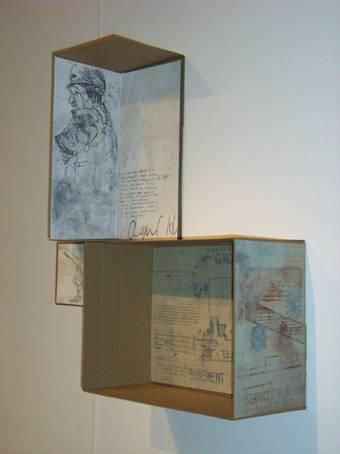 Stop. Take stock. I’ve thought about what I’m doing with the work here, obviously I have- and sort of where I’m going with it. This week I wrote it down, to reflect. My practice, working process, audiences, workshops.

I wasn’t a fan of the digital camera before now, but working on the additional installations, I have worked on, collaged and drawn on the pictures. I couldn’t have continually visualised the angles and the changing space so easily without it. The movie mode has allowed me to walk round the exhibition long after I’ve left the gallery. It has become a natural way of working and producing interesting working drawings and models in themselves. I realise documenting this exhibition has to be different to other projects because of the three dimensions, space and the sound.

Sound is a direction I have to explore more. The future project will now be 70% sound and 30% drawing, to give me time to concentrate on a small series of drawings instead of this frenzy of production for Recollect and push the sound and editing ideas that just aren’t relevant for this work.

Constantly walking round this work instead of judging it from one spot in two dimensions is feeding into life. Everything suddenly seems more three dimensional. I am looking from more angles and am more aware of tactile qualities I’m sure.

haven’t talked about my work in a critically with an exhibition since working with PhD students 5 years ago.  Practical workshops have been integral to my practice for a long time. On reflection I need to change the emphasis to help me clarify ideas and challenge my practice.

And the audience for my work? Am I changing that? I’m still considering that. 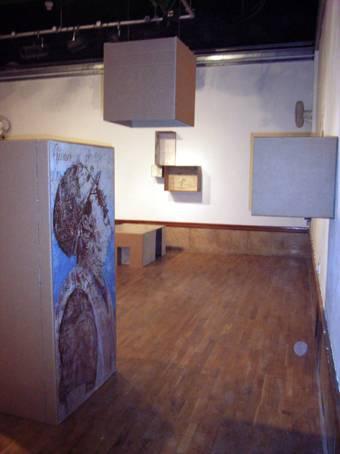