In collaboration with Office For Art and Design Technology, 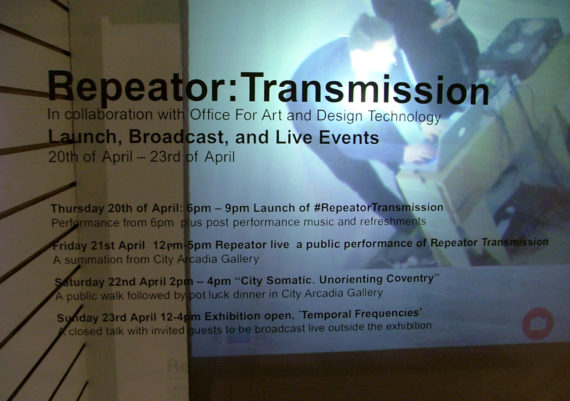 On the 11th – 19th of April: Repeator embarked on its week-long off-site programme at Coventry’s City Arcadia Gallery. The event was launched on the 20th April after a week of intensive installation and testing of ideas with collaborators. Sounds were recorded, video rendered and temporary architecture constructed. As part of our residency we researched and completed research methodologies that were sent to us by our peers in advance of the broadcast* and communicated the outcomes via our Twitter on @repeator123. We are still encouraging people to communicate with us, so Tweet pictures, questions and statements with the hashtag #repeatortransmission.

We Launched the  #RepeatorTransmission event on the 20th of April, which included Transmission broadcasting* from 6pm: plus post-performance DJ sets from Repeator and our collaborators Ryan Hughes and Samuel Rodgers. 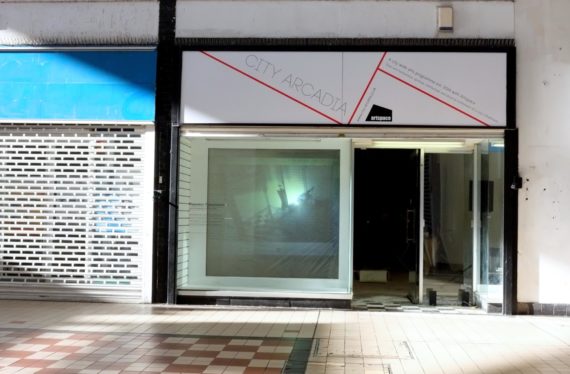 Traces became a dialogue with the recordings we took around the city. Time was jumbled through the layering of image and text. On the opening night a sound piece was improvised, that collected the layers of field recordings and spoken narratives that went alongside our walks through the city. Through this responses, echoes, statements and words uttered were cut and rerecorded then looped onto a tape loop whilst Samuel Rodgers created a central sonic algorithm within which Repeator located live narratives to and from.

During the Saturday the 21st the gallery was open for public to engage with us. On the 22nd April from 2-4pm members of the public joined us for “City Somatic: Un-orienting Coventry” a public walk followed by Pot Luck dinner in Coventry Artspace. 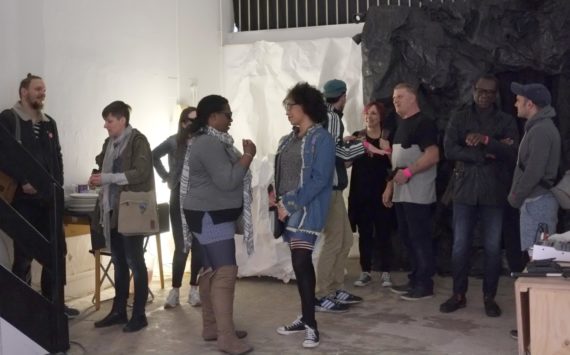 On the 22nd, we undertook a public walk “City Somatic: Unorienting Coventry” whereby walking was the method of exploration and exchange with flowing spaces of the city. Repeator led with their walkie talkies in tow, starting above ground on the 3rd floor above the gallery and onto the roof of the arcade, navigating the overt open spaces where the city meets the sky, navigating over man-made terrain. The group were given paper with which they could make rubbings with graphite to record the modernist street art of Coventry. We encountered ceramic tiles that depicted dinosaurs inside the malls of the precinct and the textures of the medieval designs on Saint John The Baptist Church. The group encountered AK47 designed glass shisha pipes in a coffee bar on Spun Street, instructions for shaking hands at Volgograd Memorial and many thresholds between civic and private zones. Underpasses, flyovers and modern bridges. 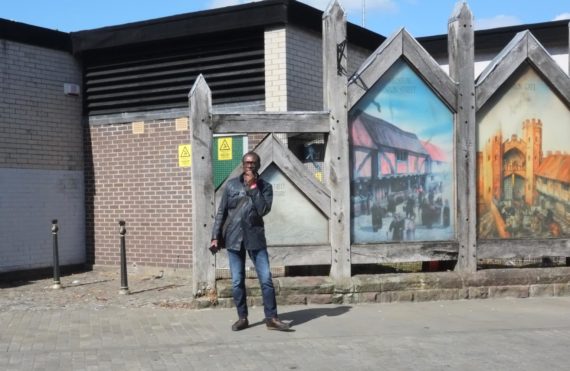 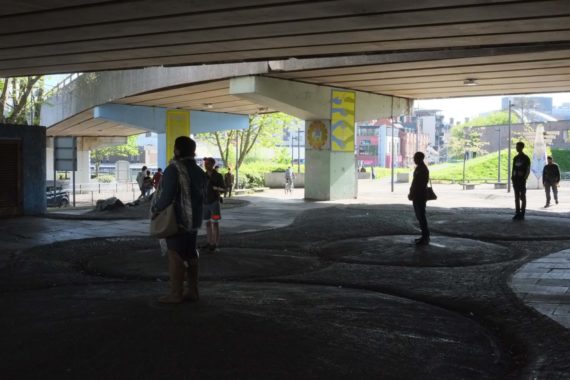 On Sunday the 23rd April 12-4pm the exhibition was open for ‘Temporal Frequencies’, a closed talk with invited artists and designers in an informal setting to address broadcasting, activism and communication. This was then broadcast live outside the exhibition using speakers and directional mic’s. We would like to thank: Andrew Jackson, Ines Elsa Dalal, Emily Mulenga, Guy Blundall, Keith Dodds, Leo Francisco , Ryan Hughes and Samuel Rodgers for taking part in this, and for what was a fascinating discussion that could have run and run. 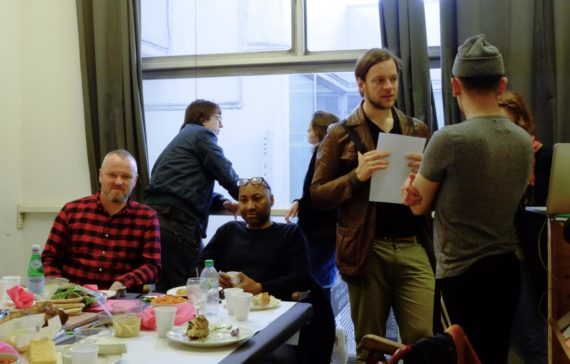 We enjoyed the richness of testing ideas in a space located so centrally and so in keeping with the cities sense of Modernist design for recreation and city living. We enjoyed working with the public, engaging and creating spaces for discussion and contemplative actions within the city. We found that we really only touched the surface of what could be possible, we are now looking forward to considering how we could take our ideas further together as ambitious work in the future.