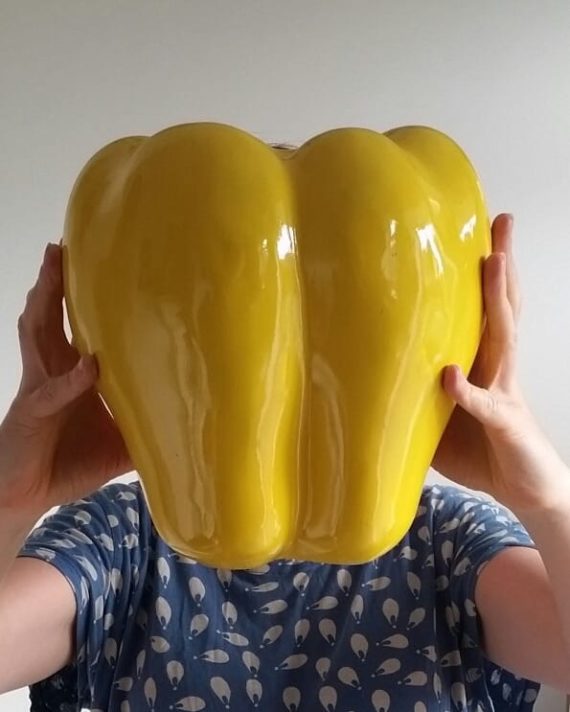 I sent 8 x A3 prints to the printers on Tuesday and spent yesterday writing and compiling a 24 page booklet to accompany my exhibition. It’s had two checks so far with some bits and pieces like typos corrected and is currently been fine-toothcombed by Lisa who also proofread my Masters Thesis. The hardest bit now is deciding the cover. I plumped for Gallio over Sunflower (Gallio is Italian for yellow so definitely keeping within theme!) as it’s the closest match in colour to the Oro Antico paint. I finally decided on a font but the text positioning is another story. A couple of people on my facebook page have been advising me though as it helps to have another set of eyes or two after being so close to something.

It needs to go to print tomorrow and I’m not sure if I’ll need to collect from Manchester or if they can deliver special delivery yet. I also checked in at the library to see what aspect ratio the screen is and it can do both so that’s good. My velcro – for hanging my prints on blue baize boards provided by the library – has arrived too and a plate hanger is in the post to me. 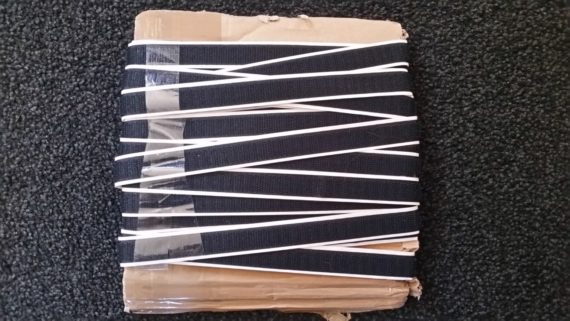 It was my last day on site (excluding my performance on the 11th October of course). I did my family yellow sticker shopping last night and found a celebration cake reduced to £2 so had to buy it for the team to say thank for having me! 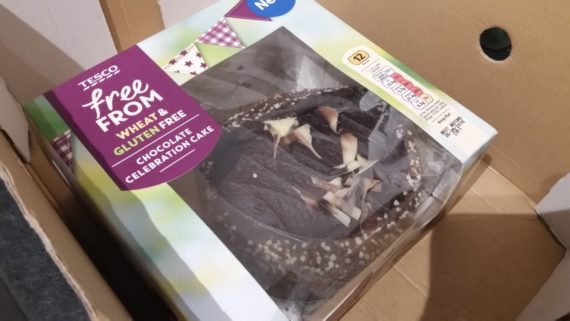 I talked to a staff member who is usually at the Halifax site and manages the different companies collecting materials for recycling. He just happened to be working at Brighouse today which was fortuitous. I got loads of information about sorting and processing that might be relevant for my performance/talk/quiz – especially some information about what happens to the paint!

I had a chat in the charity shop about people haggling the prices down and weighing in everything to contribute to their target recycling percentages. I also found some “old (fake) gold” and a comptometer which I was tempted to buy but resisted.

I also found this (yellow ochre) book: Lots More Tell Me Why (1974/79) which has a picture of a rudimentary collage on the cover so it had to be bought. Inside there is a section on gold.

So I think that this book and it’s contents might be woven into my performance/talk/quiz: Recycling ideas about rubbish and paint and yellow and gold.

From wikipedia: In Ancient Egypt, yellow was associated with gold, which was considered to be eternal and indestructible. The skin and bones of the gods were believed to be made of gold. The Egyptians used yellow ochre extensively in tomb painting, though occasionally they used orpiment, which made a brilliant colour, but was highly toxic, since it was made with arsenic. In tomb paintings, men were always shown with brown faces, women with yellow ochre or gold faces. 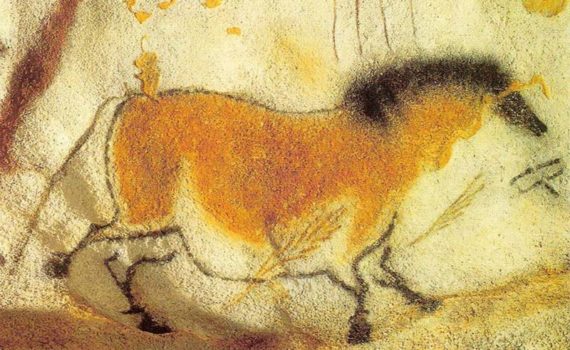 More about Lascaux Cave: https://www.ancient.eu/Lascaux_Cave/It’s also National Recycling Week with this year’s theme “Recycling. We do. Because it matters.” Which seems like such an odd disjointed slogan. I wonder how long overpaid advertising people took to come up with that one… “you do what you can”. I would actually be curious to know how they came up with that slogan. What the thought process (or multiple thought fragmented processes) was. Anyway it should be a good campaign nontheless and I looked at what people/companies were doing and found this quiz by UCL which is along the similar sort of lines to what I was thinking about including in my performance. What I like about this one is the information provided in the ‘correct answer’.

I also loved this tweet by @OrkneyLibrary :
“This is #RecycleWeek so we’re taking back all the books that people have read, putting them onto shelves for people to look through, then giving them out again to all the people who haven’t read them yet. Seems to be working well. ;) #Libraries“

It’s my last week on site already! I started off at the skips and found a chair in mustard yellow. There were a lot of house clearances today and items included this rusty umbrella, a folding table and a ceramic plant pot. I had a chat with a man about the charity shop and we enthused about the Aladdin’s cave and it’s treasure, musing about the fashionability of items.

I also was given a broken plate featuring Bishop Bonner’s Cottage in Dereham which is 28km where my late Mum was born and grew up. It’s coming up to the 3 year anniversary of her death. The plate has been mended with transparent glue but I’m obviously going to have to paint over the glue with the fake ‘oro antico’.

I’ve also made some more works on paper with the colour matched emulsion and “recycled household waste” magazine images of furniture torn in half.

I had previously adjusted the brightness and contrast on the first chair image but then I realised that this had altered the yellow colour so I had to cut out the background to white manually. You can see there’s a big difference:

On site today involved a discussion with staff about the brick building that appears boarded up. It’s currently used as storage but apparently was the recycling centre when the site was next to the municipal tip. The site manager found me this aerial view photo on Brighouse from 1978 and circled in the site.

The rip was accidental – pulling it out of the decaying frame. This is resonant of my current ripped works on paper and is approximately where the train station is – a beautifully incidental parallel as my other main project Dwell Time is situated on board trains and at stations.

I like to find out about the odd or surprising items – the anomalies – to compare with what I find interesting. They once had a dead cat (and perhaps more they didn’t find). With death comes loss and absence and inevitable getting rid of related items like pet beds.

I find the bins in skips really interesting. Some are recovered to sell in the charity shop (including a galvanised steel one like I used in a sculpture and a plastic grey one like the one I use for Museum of Contemporary Rubbish donations) and some are sorted into scrap metal or general waste. It seems like a visual echo or paradox.

Another echo is the kettle like mine at home combined with the memory of cutting a mustard yellow kettle out of a magazine yesterday because it was the same yellow as the colour matched paint. Time for a brew and reflection. The kettle went into electrical because they don’t have the facilities to test if these items are working to resell/reuse. 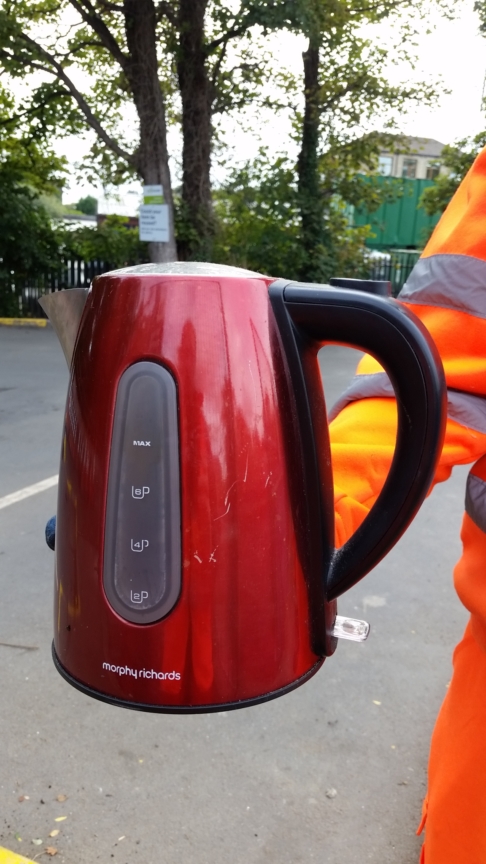 Someone dropped off these items (which will go into the charity shop) as they’ve just redecorated their house. They’ve downsized and decluttered. Their new colour scheme is purple and silver so these red pictures don’t go. Someone else might buy them. The rug was given by a friend as an intermediate rug whilst they found one for a permanent fixture. 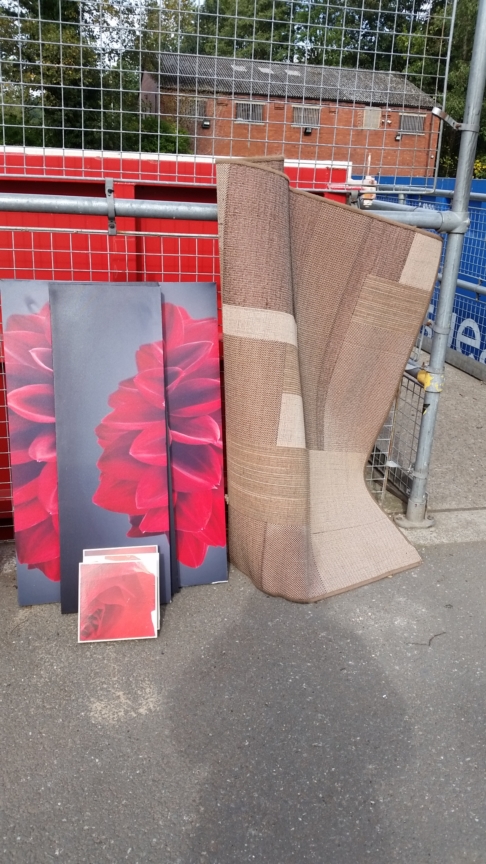 Another car load was some helpful neighbours getting rid of their neighbour’s hoard after a significant declutter. A dusty light fitting, an empty frame, a patterned rug that fell into composition.

Objects of interest from the skips today: