The next PechaKucha event I’m curating at the Hepworth is themed “Leftovers” with an open call for presentations:

Indulging in the excesses of the festive season, the eighth Pecha Kucha Night Wakefield is themed “Leftovers.” Presentations are sought in the 20 slides x 20 seconds format that respond to the idea of presented content as the “shallow-fried bubble and squeak” of your year. Scraps of thoughts, unused images, surplus projects and remainders of research are to be mashed up and loosely bound together in quick-fire presentations from anyone with visual and verbal excesses to share.

To apply:
1. Download the presentation proforma from
http://the-arthouse.org.uk/upload/file/pkn.ppt
2. Add your title page and 20 slides (no more, no less) without changing the preset timings.
3. Email your presentation to [email protected] including a brief outline/description of what you will be talking about, name, contact details and a short introduction about yourself.
4. Deadline: Monday 10 December 2012

Presenters can bring a +1 free entry. No fees or charges. Free parking available at the Hepworth for presenters. 10 minutes walk from Wakefield Kirkgate train station.

Short videos up to 6 minutes 40 seconds in duration fitting with the theme are also sought to be screened at the event. The videos must be your own work and/or you must obtain permission from the copyright holder to screen the work. Please send preview or download links to: [email protected] with the following details: Name, title, date of Production, duration, short synopsis, short biography, website.

Local musicians interested in performing short sets at the event are also invited to get in touch.

Curated by Alice Bradshaw for the Art House in collaboration with Hepworth Wakefield.

About Pecha Kucha Night: Pecha Kucha Night was devised in Tokyo in February 2003 as an event for young designers to meet, network, and show their work in public. It has turned into a massive celebration, with events happening in hundreds of cities around the world, inspiring creatives worldwide. Drawing its name from the Japanese term for the sound of “chit chat”, the Pecha Kucha presentation format is based on a simple idea: 20 images x 20 seconds. It’s a format that makes presentations concise, and keeps things moving at a rapid pace. 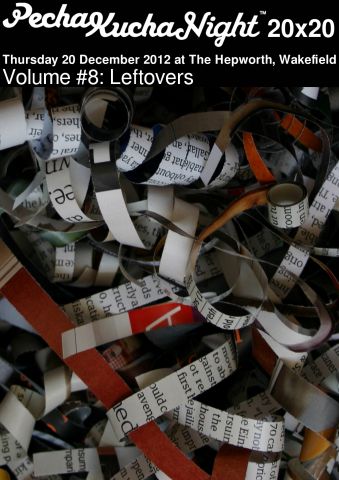 Crap: Chris Ofili – Afrobluff (1996)
Chris Ofili’s Turner Prize winning elephant dung paintings began with a British Council-funded visit to Zimbabwe at the beginning of his career in 1992. Born in Manchester to Nigerian parents, this was his first trip to Africa and it had a profound effect on his work.

Waste: Song Dong – Waste Not (2012)
Waste Not comprised over 10,000 items collected by Song Dong’s late mother over five decades. The activity of saving and re-using things is in keeping with the Chinese adage wu jin qi yong – translated as ‘waste not’ – a prerequisite for survival during periods of social and political turmoil.

Rubbish: Alice Bradshaw – Museum of Contemporary Rubbish (2010-present)
The Museum of Contemporary Rubbish is an ongoing project I set up in 2010 where I collected items of rubbish from market visitors in exchange for my rubbish. The Museum exists as an online archive which has expanded to include several collections from across the world, with museum merchandise and now a research department.

Detritus: Kurt Schwitters (1919)
Dada poet Tristan Tzara recalled Kurt Schwitters’ use of the detritus everyday life in his early collages: “I remember seeing Schwitters pick up in the streets scraps of old iron, broken watch works, bizarre and absurd materials which even junk men would have discarded, to use them in the fabrication of works of art.”

Refuse: Michel de Broin – Dead Star (2008)
Dead Star is made from residual batteries at the end of their duty. Left to itself, the sculpture will slowly cool down since there is no longer electronic activity taking place in it.

Junk: Noble & Webster – Wild Mood Swings (2009-10)
Tim Noble and Sue Webster created their self-image as “art junkies” in the 90s in London during the rise of the YBAs. Their sculptural assemblages are crafted from junk which is light projected onto to create shadows of their own likeness.

Ruins: Jean Tinguely – Homage to New York (1960)
Jean Tinguely unveiled his self-destructing sculpture in the gardens of the Museum of Modern Art in New York in 1960. The enormous white machine made up of discarded items began smoking, whirring, crashing, flaming and committing mechanical suicide. This is what is left of the sculpture housed in the Tinguely Museum in Basel, Switzerland.

Scrap: César – Three Compressions (1968)
The French artist César made sculptures from car bodies compressed into dense packages. In 1968 he visited a scrap metal merchant in London and requested standard compressions of wheel hubs be prepared for his inspection, from which he selected three for this specific configuration.

Remains: Hans Schabus – Remains of the Day (2011)
Remains of the Day at Collective Gallery in Edinburgh consisted of rubbish accumulated by the artist and his family during one calendar year – installed, cleaned, catergorised and displayed in the white cube of the gallery.

Litter: Raumlabor – House of Contamination (2010)
House of Contamination was an experimental museum hosting Artissima’s 2010 curatorial programme “Poetry in the Form of a Rose.” The walls were made out of crushed plastic bottles, compressed bales of advertising and packaging paper, leftover fabrics from the manufacturing process and discarded wood from doors and panels.

Garbage: Ilya Kabakov – The Garbage Man (The Man Who Never Threw Anything Away) (1983-95)
Ilya Kabakov’s The Garbage Man resembles a state-owned communal apartment from the former Soviet Union. The carefully catalogued and archived contents are a mix of things the artist took with him from the old communist state and things he has found since he moved to the West.

Rejects: Sarah Nicole Phillips – Curbside Object Status Tags (2010)
The practice of leaving useful but no-longer-wanted objects out on the curb for others to find is widespread in New York, but there are inefficiencies in this informal sidewalk gift economy. The Curbside Object Status Tags communicates to passers-by important information about the object’s condition and functionality.

Mongo: Justin Gignac – NYC Garbage (2001-present)
Justin Gignac picks up New York City street trash, in line with a long tradition of mongo collection. He arranges and packages his findings in plastic cubes which he signs, numbers and dates, and sells for $50 each.

Debris: Maarten Vanden Eynde – Plastic Reef (2008-12)
In 2008 Maarten Vanden Eynde learned that there was a ‘floating landfill’ about the size of the US, made up of plastic debris, swirling in the Pacific Ocean. He visited this location to collect several hundred kilos of this floating waste, which he then transported to his studio and melted down to create Plastic Reef.