Trashed is a 2012 Blenheim Films feature length documentary, produced and directed by British filmmaker Candida Brady and presented by Jeremy Irons. The film’s strapline “If you think waste is someone else’s problem … think again” sets out it’s stall: Waste is a problem – a big problem – and we’re all responsible for it.

Jeremy Irons takes us through the problem by looking at what happens to our rubbish in unregulated beach dumps such as in Lebanon, supposedly regulated incinerators and municipal dumps, and where rubbish dumped into the sea collects in the North Pacific Gyre.

Irons walks along the rubbish beaches in Lebanon, overshadowed by 40m tall piles of trash, and compares to his own childhood memories of searching for ‘beach treasure’ of small worn down fragments of coloured glass to emphasise to radical change in many of our lifetimes.

We get a flavour of how governments are failing to properly and safely regulate incinerators and landfills because it’s not in industry’s money-making interest to spend money on safety. The health implications are brought into focus with foetuses deformed by Agent Orange pickled in formaldehyde in Vietnam as well as some current day examples of health implications in Iceland and Wakefield (UK). We also meet Paul Dainton how has been campaigning against Welbeck Waste Management over the level of toxic landfill in his neighbourhood. Speculation on the increased cases of cancer in close radius to toxic landfills and poorly filtered incinerators is highlighted and it’s clear more research in this field is required to substantiate the claims.

We also meet Captain Charles Moore who began research in 1997 into the levels of pollution in the North Pacific Gyre aka the Great Pacific Garbage Patch. The levels of plastic debris currently in the Pacific Ocean is currently x6 times greater than lifeforms. Moore explains that the ‘garbage patch’ is not actually an island of floating debris that you can see from satellites in space but is more of a soup of tiny plastic particles that just get smaller and smaller and never breakdown on a molecular level to be reused in nature.

The quantity and types of waste we produce now is unprecedented. A scientist explains to us what is so different about our rubbish today compared to a few decades ago: Plastic – single-use plastic specifically – creating the astronomical scale of waste. We get the science of why plastic is so toxic to marine life and how it gets into our food chain so quickly. The problem is not just rubbish ingestion quickly taking up room in marine animals stomachs literally starving them to death – the tiny fragments of plastic release and also attract toxic chemicals such as dioxins. Biomagnification occurs in the food chain where the higher up the food chain you are, the more concentrated the levels of dioxins, etc produced by plastics are present. Science man explains that the only way half a population can get rid of these high levels of toxins is to have a baby.

On the one hand this is a shocking and revealing account of the extent and urgency of the global waste problem, on the other it is reinforcing the problem we have known about for years and decades, have been giving plenty of warning about by scientists and nature itself and have failed to act on in the interest of future generations and the ultimate survival of life on earth.

It is largely preaching to the converted. I expect that most of the people who watch this film will already be waste conscious and be doing the ‘three Rs’ that the film recommends: Refuse, reuse and recycle (or reduce, reuse and recycle as it’s more commonly put). The cardboard DVD case (yes – the did think that one through) has 3 specific recommendations that can make a difference: 1. Reusable bags. 2. Reusable water bottles filled from the tap 3. Shop locally and take your own containers, as well as buy in bulk and buy second hand. 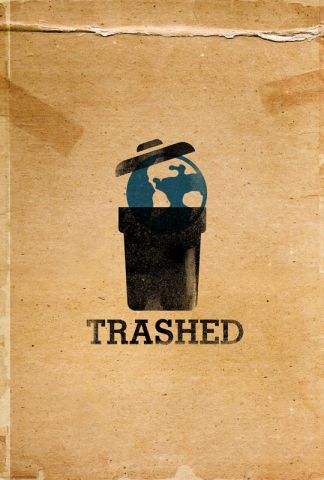 This week is less rubbish; and more rubbish.

I was invited by Jack at AdEx to guest curate their first online exhibition and thought up something rubbish (of course).

I’m inviting artists to contribute by uploading an image of an item of rubbish related to their practice in some way and answers a few short questions about it.

This is an extension and opening out for collaboration of the project I undertook in 2012, HOARD, where I collected and catalogued every item of my own practice during that calendar year.

The questions are the ones I ask when acquiring new items to the Museum of Contemporary Rubbish (a relatively new aspect of my collections since September 2012). They are:

Where did you get the item from?

What did you use the item for (if applicable)?

Why is the item no longer of use to you? 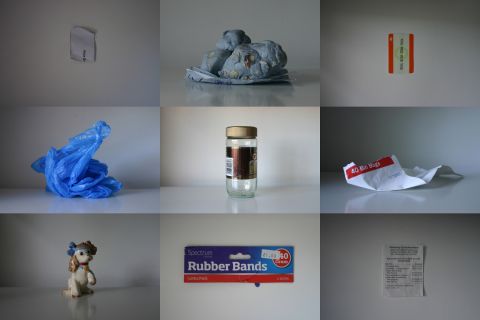 My laptop decided to commit suicide and 3 specialist declared the hard drive ‘goosed’ (technical term) with no data retrievable. Some of my research was backed up, but some I have lost forever – corrupted into scrambled 1s and 0s that make no sense to anyone or anything – including the batch of drawings I recently posted on this blog (the original full size print versions). The hard drive is trash.

Thankfully the laptop was still in warranty so the manufacturer (ASUS) have replaced the hard drive and it’s like having a new laptop again defaulted to factory settings. They wouldn’t supply my with the discarded hard drive.

Also my car died. To be fair, it was ancient and decrepit (over 13 years old) and should’ve been scrapped a long time ago. But it is really is knackered now and the time has come to SORN it and book the scrappers to come and tow it away. Bad timing. I’m already behind in my research thanks to crap laptop hard drive and now I have to deal with all this car stuff.

The company scrapping is Scrap Car Network who say on their website:

“If we can resell your car or its parts, we will, but if the car’s not in a saleable condition, we’ll make sure it’s fully recycled and won’t cause any damage to the environment.

In addition to getting a competitive price for your old car, there’s another advantage to using Scrap Car Network. As well as supporting local charities, Scrap Car Network helps to sustain the Recycling Lives social welfare charity.

The social welfare charity is helping to end homelessness by providing homeless men aged 25 and over with safe accommodation, work placements and training opportunities.”

So that’s all well and good. I considered getting the rusty piece of shit crushed and exhibited it as part of my end of year exam à la César – Three Compressions (1968) but decided against it as the car is not integral to my research, not like the laptop hard drive.

So apart from needing to get a new car and being put back a few weeks with my work, it’s not all complete rubbish. It’s not like anyone I love has died.

Then mid-research one morning my cat comes in acting weird. He slumps halfway up the stairs and is all floppy. Something is seriously wrong. The vets diagnose antifreeze poisoning and put him on an ethanol infusion to try and bind to the toxic antifreeze to stop his body metabolising it. It turns your internal organs to mush – it’s really nasty stuff. A fatal dose for a small mammal is about half a teaspoon and survival rates depend on how much is ingested and how quick the antidote is administered. We don’t know either of these factors and it’s a horrible wait. The vets call at 10pm and say he seems to be responding well to the treatment and will call again in the morning which they do but it’s not good news: He’s back to the same state as when I took him in. Nothing further can be done for him and I go and say goodbye. It’s the first time I’ve lost someone not at the natural end of a long and full life and it’s hard to come to terms with.

I don’t take his body or ask for his ashes. He’s gone and the body is an empty vessel. I’ve got the memories of him instead of his remains. The vets send a condolences card a few days later.

The repair note from the third computer specialists I tried, the spare car key and the condolence card sit on the table and sum up my rubbish week; signifying the losses of computer data, car and beloved cat. 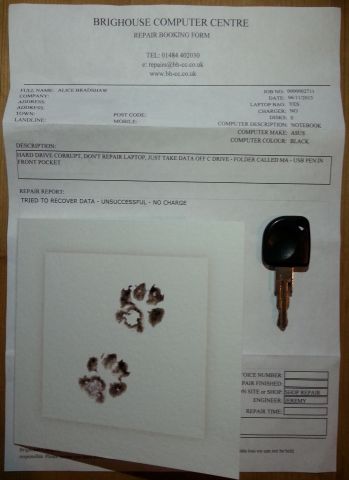