Eleven students of Art from West Kent college FdAD display  final work from year two of their course. A broad range of  ideas and themes are embodied by materials and techniques. From Louise Draper’s Trade(2017) ‘celebrating the geek-art subculture, to Nathan Selvedran’s ‘Hide-Folded(2017) in which collapsing folds of wallpaper and building plaster engage with notions of isolation and anxiety.
Ally Sweidan creates shadows from the patterns on maps of places where he/she has lived. Drawn in lines marked into the surface of a perspex sheet , soft shadows cast upon a paper surface come and go like memories,with the light.
Siana Kohler paints. Her piece which she describes as ‘portraits of a room’ invoke feelings of a charged space redolent of past events. Almost monochromatic, the paint has a softness of touch, an oiliness, something Morandi-esque about them.
Ali Doherty paints also. Black – night- space- white-grey illuminated trees, hand-like foms, images seemingly both isolated and cinematic. 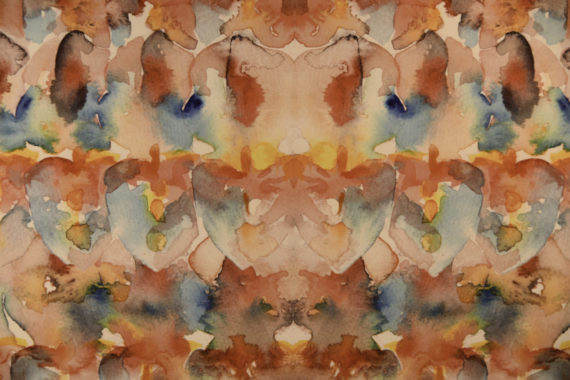 Large shiny bulldog clips have a trendy feel. Six of them hold Maryanne Bakker’s large digital print based on a smaller watercolour piece, suggestive of a playful Rorschach blot, digitally repeated and seamlessly stitched together. They lend a temporary feel, a short stay on the wall in the course of a busy itinerary.
Presentation can be problematic. Alanna Coppard fixes her work to the wall with brass panel pins that would glint in a Magpie’s eye. Eighty-eight of them make their point, make the work stand up for itself. Brass panel pins are lovely things. Her drawing seeks a kind of evocative metamorphosis through changes in scale and anthropomorphic form.
James Abbott’s work which ‘…. is heavily influenced by renaissance studies of plants and anatomy….’ is presented in an unmounted paper form hanging by clips.  Renaissance and paper clip engage in a stand-off with the work. 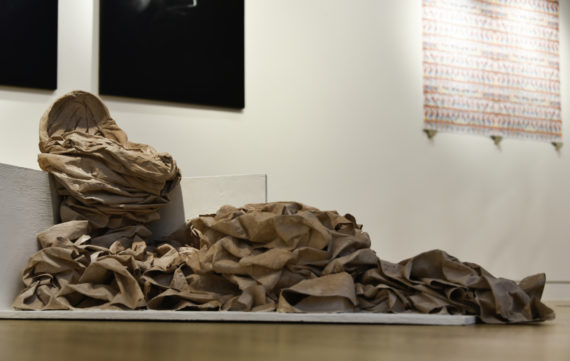 Nathan Selvedran’s sculptural piece in two parts ‘Hide – Folded’ has a feeling of stillness, a kind of finality, settlement, a moment held in suspense. There is completeness that arises from  the materials and the manner of their making, from  fold upon fold of wallpaper material and building plaster, muted brown,  resting in a state of suspended collapse. Michael Ashby offers the thought that his ‘Shaman Box ‘, a piece with maybe a nod to Robert Rauschenberg’s Combines,’…explores how electrical signals from early computer graphics and dance music transmute through synapses inside human brain circuits, forming memories, and new aesthetics from undefinable locations…..’ ( Exhibition notes) Incorporating video and dance music it has the beginnings of an enquiry into the way that tastes are formed, over the airwaves, that we are created by what we recieve from sources to a degree unknown, a cultural thing. Daniel Huckfield uses found objects in ‘Stud’ and ‘Untitled’. To ‘Un-title’ a thing is to strip it of its former identity, make it nameless, leave it to find a new name? 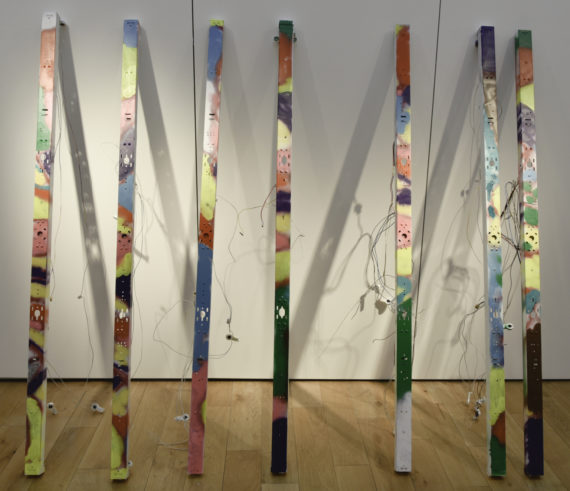 Defunct fluorescent light fittings lean exhausted against the gallery wall. Their now impotent wiring hangs loose. There is something mischievous and subversive in painting the one surface that was hidden when the units were screwed to a ceiling.
‘Stud’, a set of three found metal panels from some modular construction, spreads itself on the floor a few metres away. Daniel’s intention is that the pieces ‘….create a dialogue between each other, the flatness and lack of paint of the floor piece against the boldness and energy created by the painted surface of the standing piece’ (Exhibition notes. 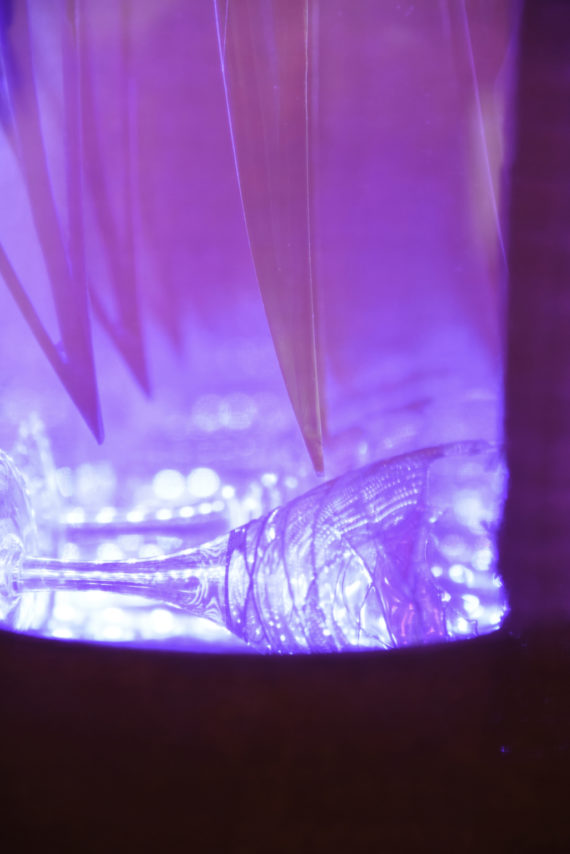 Debbie Clark’s piece ‘Broken’ nods in the direction of recent work by Josiah McElheny  ( shown recently at White Cube). A broken wineglass sits in a reflecting chamber, sharp shards hang above it. The LED brightness, the plum and violet richness, the sharp edges, the matter of fact reflective repetition of it all  harbours a decadent, tasteful violence. 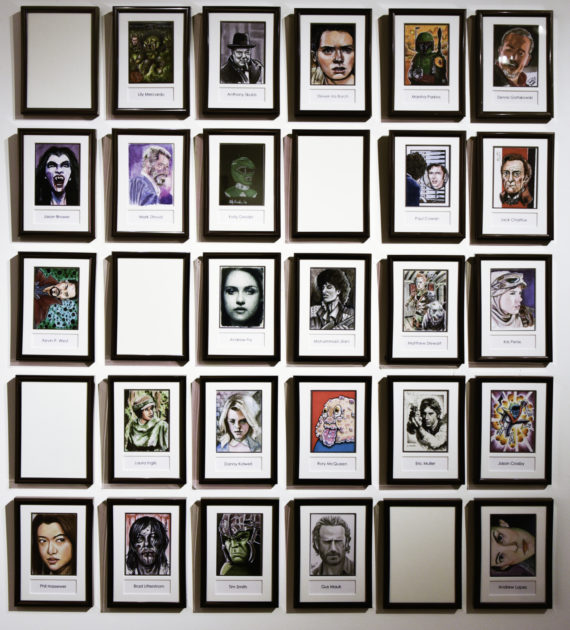 Louise Draper’s piece ‘Trade’ is a series of 26 small framed portraits and 5 empty frames. she describes it as a ‘collaborative project celebrating the geek-art subculture as commentary on the commercial world.’ (Exhibition notes) Each portrait is named as by a different artist. She describes the work on her Facebook page as sketch cards she has swapped with her fellow Topps artists and the piece is a ‘show within a show’. (Small world, in the course of researching this piece, I discovered Topps produced a card of a baseballing relation of mine, one Greg Minton)

A show of student work reflects upon the degree to which the growth of implicit and explicit criteria might have enabled the artists to progress. A show like this is necessarily uneven. Ideas and execution might not mesh, drawing techniques may not have achieved sufficient fluency, the implications of display for the work might not be fully grasped, statements may seem at times to attempt to remedy difficulties met in the work, but simultaneously, fluency is actively sought, technical competency proceeds little by little, form and content are nudged into closer union, ideas refined; the implications of actions make themselves visible. Art generates its own criteria. Essentially it is not measurable absolutely against some external criteria. Makes you think.