It’s open studios at my Yorkshire Artspace studio building this weekend (Exchange Place, Sheffield), and I have a pop-up exhibition called The Sea.

The sea is a subject which I keep coming back to. It fascinates me because it is both beautiful and terrible. I miss the sea when I don’t see it (which isn’t that often, since I probably live at the furthest point in the UK from any coastline!). On holiday I can spend hours just staring at it because it is so perfect and beautiful. Yet I’m also scared of the sea. I don’t swim in it anymore because one day I just lost my nerve for no real reason. It seems terribly unsafe and full of uncertainty.

My interest in the sea goes beyond my own personal relationship with it though. I’m really interested in sailing, and particularly with in 1969 Golden Globe Race to circumnavigate the globe single handed. The stories from the voyages those men made were unbelievable; and before this, my interest extends to the terrible conditions of sailors through time. The terrors endured during a sea crossing are almost beyond comprehension, and the conditions and diseases are a stretch of the imagination for someone like me.

It is these conflicts between perfect beauty and absolute terror that inspire me to make work about the sea. It seems like the closest thing to hell on earth; monsters, myths and a reliance on primitive navigational tools to get you though all contribute. The water itself is an otherworldly landscape which forever shifts and changes, at times strong enough to smash a ship, rising as mountains from nowhere, at other times it is so calm and still that sailors pray for a breath of wind to carry them along. It changes perceptions and creates mirages, and it even glows in the dark!

It is little wonder that sailors cling to their faith and their superstitions.

Come along and see my work, including some pieces which have never previously been exhibited.

You can also find out more about my residency with Bank Street Arts at my studio next door to the exhibition. 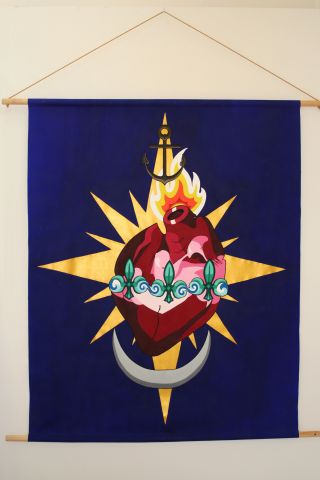