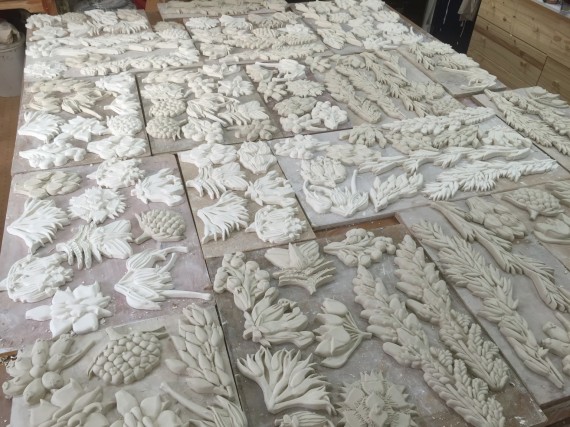 I have been up to my ankles (literally!) in porcelain slip for the last 10 days. My studio has turned white and everything in it is covered in a white residue left over from the slip that abounds. This is my new life now, after 20 years of press-moulding clay. I have moved into a white world where I need to don aprons and slip-casting boots before I can enter! It’s not because I’m messy (honest!). This is partly because of the quantities of slip I am getting though. I have cast nearly 100 litres of slip in just over a week. I have turned into a human machine, churning out cast after cast. I need to, we have two and and half weeks to go before we will be on the ferry! Anyway I have nearly reached the end of the slip and today I will start mixing glazes. The first kiln will go on today with bisque ware and the bisque firing full of samples should be cool enough to open this afternoon.

Meanwhile the crowdfunding campaign is doing really well. We are up to £3263 of our £4000 target now, and have until 1st April to try to get to the target. It’s been interesting and hard work making it happen. We are fully aware that it is not easy for arts-related campaigns to succeed, having spoken to many people who have attempted to raise funds this way. Most of our contributors are known to us, and we are so grateful that they are willing to support us in this way. It’s always good to find that a stranger has donated, which means that the project is reaching out into the wider world. I tried advertising on the Facebook page, and discovered that although it didn’t bring in a vast number of extra pledges, it certainly upped the reach of the post, so that was an interesting experiment that I know I can use if I ever want to push something to a wider audience. Here is the link if you want to check our progress (and you might even feel moved to pledge! There are some great rewards for both sound and ceramics lovers and more!) http://igg.me/at/shetland-landscape/x/13402832