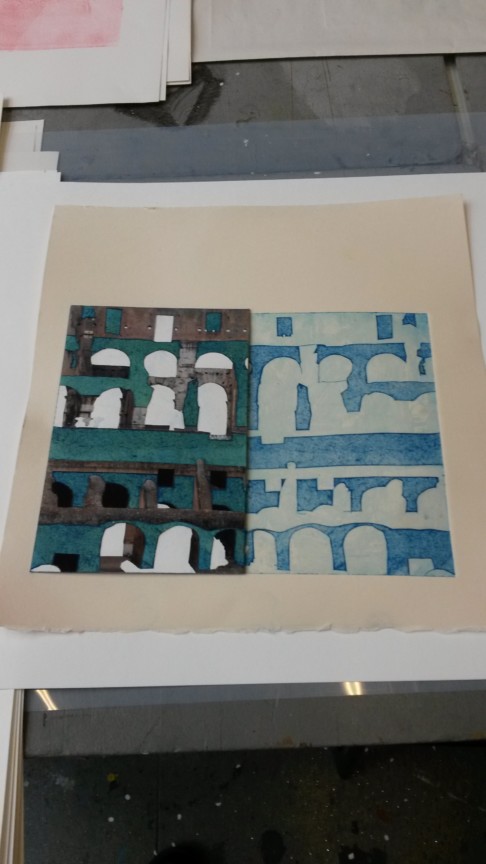 This week, or very nearly last week, having been too busy to post a blog entry until now, was very interesting.  I am back in residency tomorrow, but still thinking about what was talked about last Tuesday.

One of the level 7 students came into the print room and she opened discussion about the use of digital in art, and the perceived validity of laser cut against hand crafted lino prints. We looked at my Transition piece as I have now titled it, and Glen the technician opened a book to look at Barthelemy Toguo and Christoph Loos who both display the print and the means of production i.e the plate.

And also we looked at some printing using laser cutting and some print work that was digital in appearance.  Interesting discussion I thought, and the work of those printmakers interesting too.  In the case of my work, though, I have not made the plate into a sculptural form as those printmakers had.  In my piece the plate is also part of the work, but is still essentially image.  The plate is also an found object, as such, although altered; and an image in its form as it preceded the stage of modification to become a printing plate.  I like it the way round.  It has an existence in the real world outside of imagery but it is denied that independent existence as it is interdependently merged physically with the printed element. I suppose in some way I am holding on to some aspects of a practice using collage techniques and material, but it is also the copy/original relation, and it is about allegory and it is about language and also about issues of a technological age.

I remember discussing Paul Virilio’s writings about the technological age with Dan Hayes at a symposium last year at the University of Suffolk.  He takes a different route in his work to explore the digital and technology but those ideas still influence me.  Language is also very much an influence, and I came across a new reference from a piece of writing coincidently relating to one of my tutors at art school, wherein J.R.Sumner wrote about a literary aspect that is part of the nature of the human mind. The reference argues from a paradigm in cognitive science and psychology, and resonates because it discusses ‘the gap’ between the incompleteness in writing, stories and art imagery, and real experiences and meaning.  And particularly when images are made to deliberately leave the viewer with an incompleteness and the viewer has to engage in filling in the gaps. I think I will research the references a bit more, as they do follow my train of thoughts.

Any more prep for tomorrow.