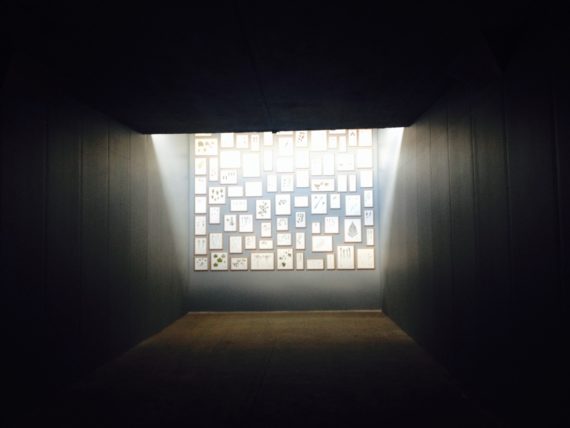 Aarhus’ largest contemporary art museum, ARoS, is hosting its first triennial exhibition this year, to coincide with the City of Culture festival. The theme for the triennial is The Garden: The Beginning of Times; The End of Times. The exhibition explores the way in which humans have co-existed with nature and how a range of diverse political, religious, cultural and scientific world views have affected our attitudes and approaches to the man-made natural environment over time. The theme of The Garden is interpreted broadly within the exhibition.

The Triennial has three parts – past, present and future. The exhibition associated with each one of these sub-themes is located in a different part of the city and sited in an exhibition space which suits the theme. For example, The Garden: Past is a gallery based show of historical painting and installation in ARoS’ exhibition spaces, while the site-specific installations of The Garden: Present are exhibited in a variety of internal and external locations across the city. The Garden: Future exhibits a series of large outdoor works along a coastal stretch of land, just south of Aarhus.

‘O’ Space is an old industrial warehouse space which sits in the heart of Aarhus’ docks. Although the docks are still well used, many of the older buildings are empty and there has been large-scale redevelopment of the dock space to house, for example, the city’s public library at DOKK1.

‘O’ Space provides a rare opportunity in a city for space to make and exhibit very large scale artwork and it has been used to good effect. It houses six  immersive works, including The Blue Room video and plant installation piece by E.B. ITSO, which explores US solitary confinement incarceration regimes, and KOE by Cyprien Gaillard which shows the evening flight patterns of a flock of parakeets which live and fly nightly around the centre of Dusseldorf.

Two installations use the large scale and industrial feel of ‘O’ Space particularly effectively. Finnish artist Pia Sirén has created a sublime landscape, which visitors look at from a viewing platform and which they reach via a path made of scaffolding, construction materials and roadworking ramps. On first look, the landscape appears to be of snow capped mountains, forests and rivers, but it quickly becomes apparent that the landscape is actually constructed from the same construction materials which were used to build the path. The piece is a visual joke with serious intent: we often pay more attention to what we build than we do to nature; and we prefer what we build to nature, often hastening its demise.

Ismar Cirkinagic uses the physical features of the brutalist concrete warehouse to particularly moving effect. Cirkinagic is from Bosnia Herzegovina and has, since 2006, been collecting samples of plants growing on mass graves, drying them and mounting them under glass, accompanied by their Latin botanical names. He shows his large collection of specimens as if they are a botanical or personal collection – the collection is carefully and self-consciously presented, as if the owner is keen to appear learned and tasteful. But the wall on which the framed specimens hang is made of blank concrete and has a vent at the top – which lets in light. The pale shafts of light hitting the frames gives the piece a quiet, elegiac quality.  Originally designed to let out industrial fumes, the vent might also let out the smoke from an oven or gas chamber. Cirkinagic’s piece is chilling and moving and it is completed very effectively by the choice of site.