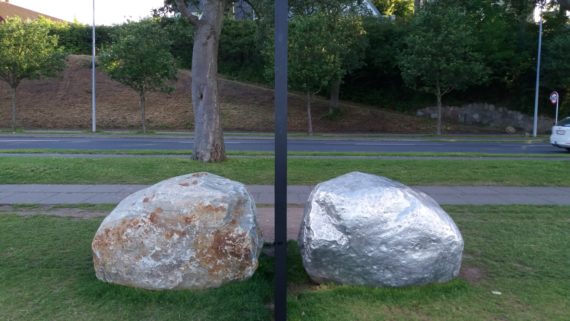 The third part of ARoS’ triennial exhibition is The Garden: Future. This group of works is sited along the coast just south of Aarhus, from Tangkroen, a spit of land just south of the docks, to Ballehage Strand – a distance of around 4km. The Strandvej, the coastal road south of Aarhus, runs close to the sea. Between the road and the sea is a long and narrow strip of grass – often now more than 8-10 metres wide. It acts as a grassy showcase for 14 substantial pieces of work.

The works are arranged in clusters and, as you walk along the Strandvej, there are at least two or three artworks in your eyeline at any time. This helps draw viewers along the route of the exhibition – there is always something intriguing just in view, but I wondered if each piece of work needed more space of its own. Many of the works had been made to look deliberately odd, out-of-place, or sinister, such as Anssi Pulkkinen and Taneli Rautiainen’s  Constrained View (Gap), (Fountain) – a car being hoisted from the water’s edge, dripping with sea water, in front of a screen print of a section of broken bridge – and Superflex’s Investment Bank Flowerpots – large vertical ceramic containers in the shape of corporate headquarter buildings, planted with poisonous plants.  Although they were undoubtedly effective pieces, they could have had even more impact if the viewer had come across each one individually within the landscape.

It was enjoyable watching people work out if they could find a viewing spot at which the mirror image and visible rock part did not join perfectly…but was an impossible task.

I enjoyed the introspective air of this piece. The real rock, which was a natural, if obviously inert, form seemed to be intensely aware of its own reflection and its copy and seemed to be oblivious to the natural environment, of which it was really part.  The apparent self-absorption of the rock and its copy, the blurring of the boundary between the real and the simulacrum and the dependence of each upon the other for their own completion seemed poignant and very contemporary themes.

Tomás Saraceno’s NGC/IC/M+M (working title) introduced onto the Strandvej some unnatural, but familiar, forms.  Saraceno’s hollow structure is open with polished metal facets which catch the light and reflect fragments of the sea, sky and grass outwards and back into the structure. Drawn from geometric, biological and architectural forms, Saraceno appears to be seeking a new structural language which  appeals across political borders and societal cultures. His installation remind me of playground structures, of insect nests, of blastomas, of pomegranate seeds…and at the same time, it looked as if it had landed from space and might take off there again, within anyone who might have ventured inside.

Katharina Grosse also combined the unnatural with the familiar in her ground pieceUntitled.  Grosse had painted the grass verge and pavement on both sides of the road;  tree trunks to head height; and rocks and sand at the sea edge with white and crimson acrylic spray. The effect was unnerving. From a distance, the crimson paint looked blood-like. It looked like the scene of some sort of accident, an explosion or pollution – at the very least an unintended spillage. It looked highly unnatural and pedestrians walking through the installation stopped to look at the paint marks on bare patches of soil. Grosse had not painted directly onto the road, possibly for public safety rather than aesthetic reasons. In her statement about her work, Grosse talks about her desire to send ‘the fluid perception of painting through the ordered hierarchy of landscape and street dynamics…influencing how we look at ourselves, politics and society’. To the extent that I interpreted her painting as an environmental accident, or an expression of some form of societal violence, then Grosse’s use of painting as a device to explore our attitudes to the man-made landscape and what is or is not appropriate within it, is successful.