How wonderful to find that you are reading me – a day after I’d been filling a friend’s ears with moans about holding monologues I saw that I’m back in the top10. Merci! Conversations will ensue.

More good news: the side-effects of my new meds have lessened if not disappeared, and I’ve had a rather good art-visit by Nick Kaplony and Kate Murdoch. We are working towards The Beginning of History together, with four other artists. Kate remarked afterwards how well organised I appeared. Well, needs must. It’s not often that I can show my work unmediated by a computer-screen, hear about that of others and have a face-to-face art-conversation. I’d laid out my offerings on the carpet in the living room, got pieces out of boxes and drawers days in advance so I could focus my day’s exuberant if limited energies on the actual meeting. It was stirring to see how Nick and Kate responded, both of whom explore memory/family history with their work. Such a perceptive, inquisitive and thoughtful audience – I encountered so much enthusiasm that for a few hours my doubts about the quality of my work were dispelled. They came back almost as soon as N and K were out of the door though…

A piece of writing-in-progress joined the finished pieces on the floor. I have been teaching myself Sütterlin, a form of handwriting taught in German schools between 1915 and 1941. One of my most treasured possessions is a post-it note from my dad to me, but I’ll have to tell you about its shifting connotations another time. Suffice to say that it’s handwritten and that in it I can detect traces of Sütterlin. In old photo-albums, which I looked through with my mom a few months ago, the annotations, probably made by my maternal grandfather, are in Sütterlin too. I am fascinated by the similarities and differences between today’s and yesteryear’s scripts, the continuities, conversions, rejections. There’s a lot of zigzagging here, serrated but neat lettering which has been ironed and rounded out. It does look beautiful and mysterious and encapsulates something for me about the workings of history.

My writing felt fitful, jittery even; wrist and hand cramped rather quickly. I wanted to explore a phrase the meaning of which I keep re-calibrating. So many intertwined stories! A few years ago I had a correspondence with my favourite clever boy (not so small anymore – he’ll turn sixteen in December), son of friends in Germany. We wrote to each other in English (in Germany children start on their first foreign language in 3rd grade) and after the banking crisis I received a letter setting out in diagram form how it all fell down. A consice feat! At the end of the letter I found an apology in German: ‘ich habe noch keine Vergangenheit’, meant to say something like ‘I haven’t learned yet how to construct the past tense in English’, which literally translates into: ‘I have no past yet’. Now there’s a loaded sentence! It was as if he was implying ‘I know that you, the generation(s) before me, have landed us in this mess.’ As I was already/always in the process of thinking about our Vergangenheit this phrase slotted right in, and jarred, on so many levels. Ich habe noch keine Vergangenheit. A statement, a charge, a reproof, a wish, a worry, a woe that it is not so. 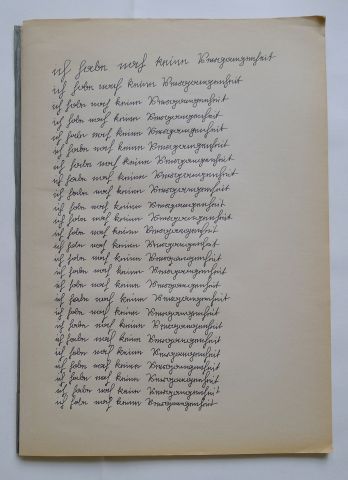