I started with a clear idea for this post but something tugged at me and needs must. Revisiting the same photographs, pursuing, pondering, processing, I realize I’ve been laying the ground for more challenging enquiries.

Repetition for me, in my art-practice, means being called to return to and pore over a subject over and over again. If I heed that call difference occurs through the tiniest of shifts in angle (time having pushed and pulled, dislodged me from where I was), which may mean that when I look at an image, an object, a gesture, an encounter, or their memory, once more, it too will have changed. I researched traumatic memory a while ago (I’m not at all sure if that term would have been used in the 50s, when my dad underwent therapy) which stands in relation and contrast to this process, as it compels to repeat, always in exactly the same way, through flashbacks say, the scenario of an experience which overwhelmed and cannot be integrated into the flow of one’s story. When my father woke up screaming night after night, what did he see?

I find myself reluctant to turn to certain aspects of the fragmented story I explore, very much want to stay in my dad’s childhood, keep him and myself safe in ‘before’. I had meant to write about the little sailor-suit, and almost, almost did, even after I listened to Michael Rosen‘s The Benjamin Broadcasts on Radio4, and took from my shelf Walter Benjamin‘s Berlin Childhood Around 1900, where he mentions just such a suit in The Sewing Box.

Although I only know fractions of his oeuvre I feel attached to this particular philosopher who never disappears in abstraction and explored even his childhood in ways which illuminate his idiosyncratic thinking. In his radio-broadcasts to young listeners (between 1929-33) he considered complex and wide-ranging subjects, from tenement housing to Kafka to witch trials. At the end of what in fact was his last broadcast he announced his next topic: the Ku Klux Klan. I long to think that my dad listened to these broadcasts at the time, even though he was much too young. I wanted him to love this as I do, for our paths to cross here.

My sense of time is precarious. Often when I read I wonder: was my dad part of this? Was he there at the time? until I count the years. When Benjamin fled to Paris in 1933 (the year Hitler came to power) my dad was seven, when he fled Paris in 1940 he was 14. And yet there are points where, although literally miles and years apart, their individual trajectories intersect, for me. Only for me.

My dad spent three days in occupied Paris in August 1943, during his Reich Labour Service (RAD – see post#98), bought postcards of Sacre Coeur, Eiffel Tower, Arc de Triomphe, like a tourist would. He was excited by the sights he saw (I think the RAD took him abroad for the first time) and after the war glued the cards into his photo-album. Not a sign of occupation in these images, not a flutter of swastika flags.

Benjamin, fleeing from the nazis in 1940 (the Gestapo raided his Paris flat not long after, confiscated his documents which amazingly survived), takes his life in Portbou, the Spanish border town on the Costa Brava, where his group of refugees, having walked the mountain pass across the Pyrenees into Franco’s Spain, is initially refused passage.

At one point in 1943 my 17 year-old dad and his RAD-battalion were stationed in St. Jean de Luz, on the Atlantic Coast near the French/Spanish border (more than 600 km away from Portbou, at the other end of the Pyrenees). It’s the first time he sees the ocean, and he marvels at its beauty. He buys postcards as well as photographs of cliffs and beaches (annotated by him, translated by me: Wonderful days, in-spite of uniform!), followed by images of a border-post with armed guards, and a view of mountain ranges on the Spanish side.

This looks like a whistle-stop tour of France, before being sent into battle. Last stop in Cherbourg, as a workingman (Arbeitsmann, his notation). He also notes that his sea-journey to the US, as a PoW, starts there less than two years later. 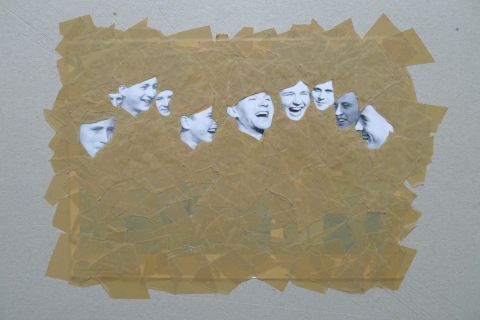