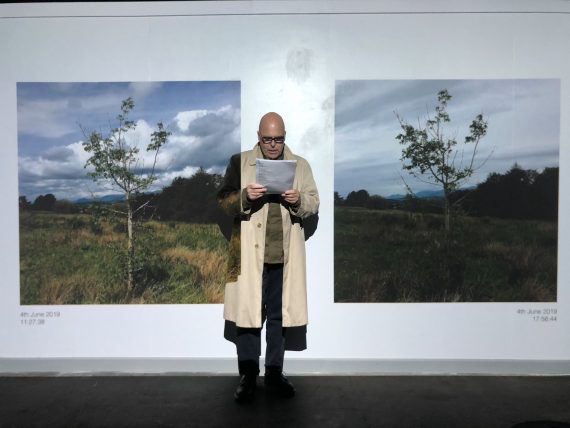 Artist Rab Harling asked me to perform at the premiere of his beautiful new film ‘Exile in the Kingdom’ at Cable Depot in Woolwich. He told me that I could do whatever I wanted and I decided to read a few poems with a slide show of images from Rab’s book Exile in the Kingdom playing on me. The poet Lucy Furlong also read along with Alison Fure. We were lucky to have a presentation by Evolutionary Biologist, Mark McMullan, on ash dieback too. An evening of experimental film, science and poetry.

“Rab Harling’s new film Exile in the Kingdom is beautiful. One of the most original things I’ve seen in a long time” – Paul Sng, director of Invisible Britain and Dispossession: the Great Social Housing Swindle.

Exile in the Kingdom is an elegy to Britain’s third most common tree, the ash, which may soon become a rare sight on Britains landscape, due to infection by the ash dieback pathogen. Ash dieback (Hymenoscyphus fraxineus) is estimated to affect up to 95% of Britains estimated 90 million ash trees.I drove down from Loughborough intending to cross the Thames on the Woolwich Ferry but finished up going through The Blackwall Tunnel.

It was a good evening. I read some of my symbiotic poetry written via link, shift and channelling with William Wordsworth. I read Yew Trees, both the Wordsworth original and my own poem Yew Trees after and with Bill Wordsworth himself. I finished with Emma’s Dell. Both of these poems have been set to music and released by Anglo Japanese band Giant Glove and are available on Spotify, AppleMusic, Amazon Music etc .. have a listen!

Sward {skin of the earth} is Lucy Furlong’s latest walking project and the subject of her new chapbook from Sampson Low. She read from this and also read recent poems written for the trees on the Cambridge Estate in Kingston Upon Thames, 200 of which will be felled in the name of regeneration.

We also had a great talk, an introduction to ash dieback by Mark McMullan, Evolutionary Biologist at the Earlham Institute.

The audience was warm hearted and generous.

If you get an opportunity to see Rab’s film Exile in the Kingdom or see Lucy or Mark then do so! You won’t regret it!