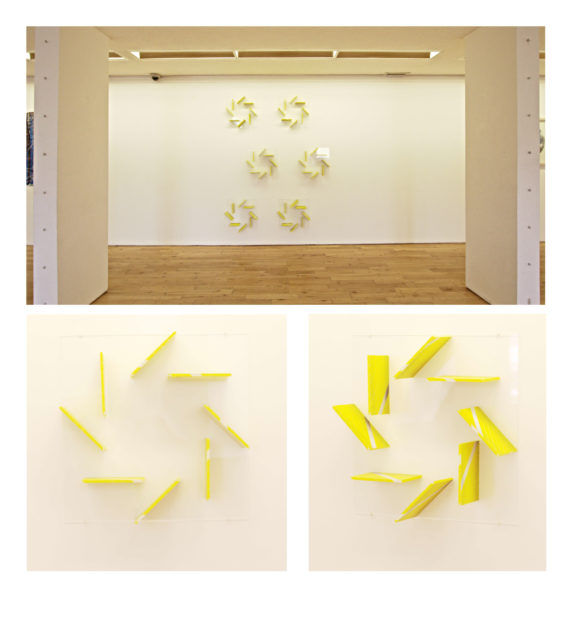 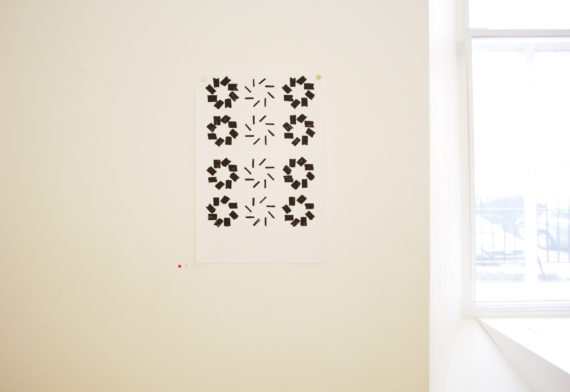 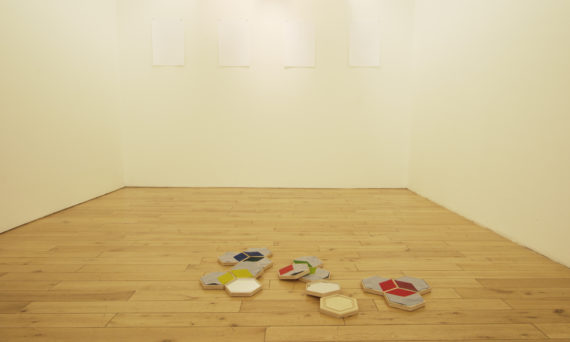 2015 is International Year of Light

I am particularly drawn to early light patterns that were produced at the very start of the big bang. These are called B Modes signals. This work is inspired by current scientific research (see post ‘Research’).

Image detail / Active Collage: You can see the light but not touch it but it does exist, 2015 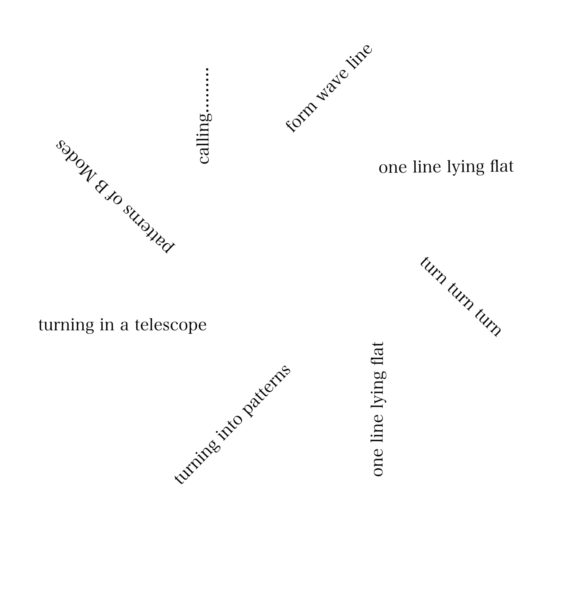 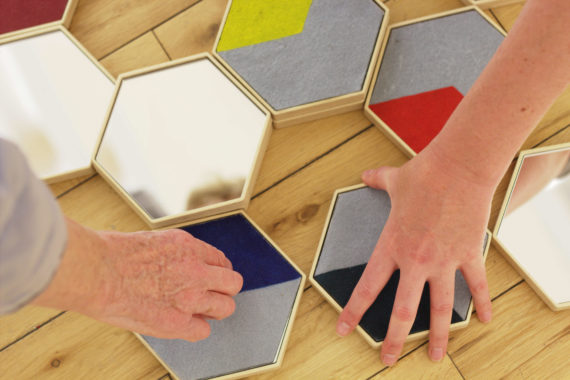 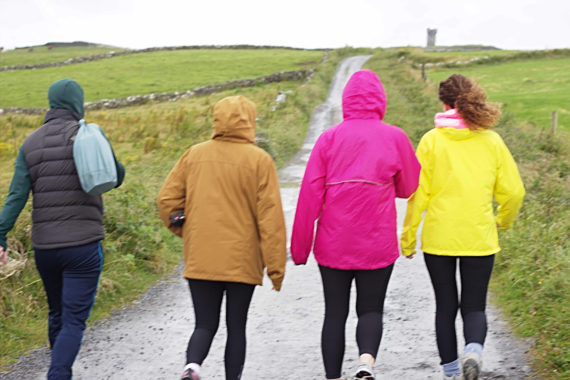 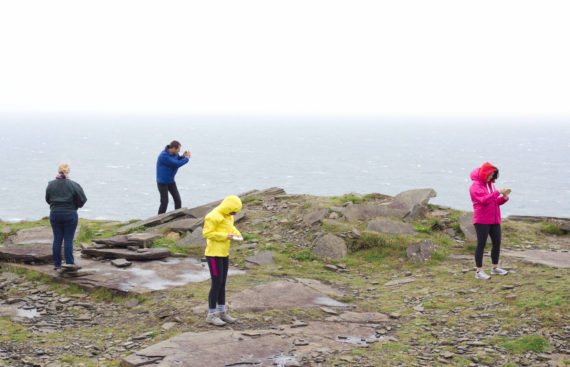 Timber Mirrors were carried from the gallery to a heritage site called the Cliffs of Moher. I chose this site because it acted as a backdrop of everything and nothing. The site by eye has almost equal part sea to rock. A kinda nil point where people could focus on the light with less object distractions. 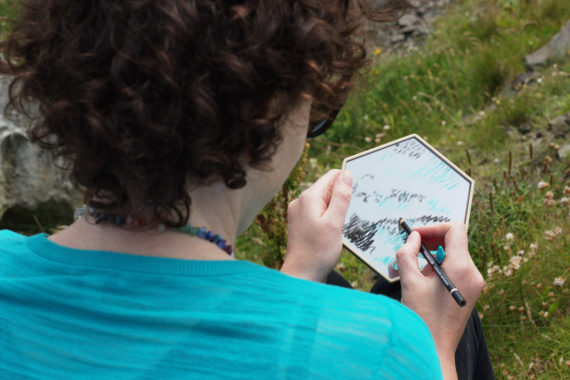 I asked the group to explore light by looking into the hexagonal acrylic mirror frames. I passed around wax pastels for people to record highlights of light on cloud, ocean or rocks by marking an x or lines or dots onto a layer of clear film (pre-cut and laid onto the hexagonal mirror). I directed the group to turn in angles and movements. I was really pleased by the drawings and the unexpected outcome of each person’s different approach to record light! Some went with the movement of light whilst others ordered the light.

I call this action of drawing as the space in-between discovery.

The Participatory Art Work comprises sculptures from a previous project Timber Mirror Walk 2013. Early photographic inventions underpin the ideas behind this work. Glass lenses and boxes were assembled to capture the world with light which is one of the functions of this work. The work makes an homage to Alfred Stieglitz’s Equivalent Series (1928 – 1931) a collection of cloud photographs, that to me, expresses the poetics in the everyday.

[see below links for research background]

New work inspired by ‘B Mode’ – twisted patterns of light believed by many scientists to be evidence of activity at the very beginnings of our Universe.

B Mode signals were created by primordial gravitational waves.

An amazing coincidence happened when I went along to a talk at the Hunterian Art Gallery in June. The speaker from the School of Physics and Astronomy, is heavily researching Gravitational Waves…right at my door step! Could not believe this and was very excited at an invite to the Institute for Gravitational Waves at Glasgow University. Mr Killow explained it is an international effort to directly detect gravitational waves. Little did I know that a team is making a detector of high precision – functional by laser beams to measure them in space. There is a 1:20 chance of direct detection – if found – will be amazing result to our understanding of the universe. And create a new science.

If detected – “unique view at the first moments of the universe”

It was at this lunchtime Insight talk were I found out 2015 is the international year of light. The website is rich with resources and exciting events going on across the world: www.light2015.org

Astronomy Picture of the Day: http://apod.nasa.gov/apod/astropix.html

Touching Space-Time is a research project in Glasgow University – a collaboration between Designers, Artists and Scientists: http://touchingspacetime.tumblr.com/

My work is process-based, and often reflects my interest in primordial structures – I am driven when spontaneous actions form, beauty in chaos, order in chaos.

The work draws on the tools used for capturing such as the telescope and camera as well as the analogue quality of postcards. In an attempt to understand the art, philosophy, psychology and science of capturing.

Light plays an essential part in everything and most importantly for myself in art making. We are taught about light in early art, photography and science class. This developed for me to study light in theatre design, light sculptures and laser lights in music clubs. I found an old note book of a collection of quotes on light from 1998. This is where the title for this piece came from. Unfortunately it is the only quote in the note book I did not reference the author!

Part of this project I led a participatory art work/walk – collective capturing of light. My I turned on my phone I had a pleasant surprise quote pop up from Fotor:

“Wherever there is light, one can photograph” Alfred Stieglitz

This participatory art work was inspired by Stieglitz cloud series!!

This work was made for viewer interaction in the gallery. I wanted to create a work that simulated a change occurring. At a recent Fruitmarket Gallery exhibition – Possibilities of the Object – experiments in modern and contemporary Brazilian art inspired this piece.

This work by Willys de Castro really got me engaged with making work for a gallery. Most of my work is made in the form of participatory art. I have shied away from exhibition for years but have really enjoyed challenging my work to present in a gallery space.

Drawing from scientific drawings – I needed my pattern (image at top of post) to be exact. Maths is not my strong point, so my boyfriend studied the pattern and used pythagoras theorem for my pattern arrangement on acrylic!

Image above is my Dad demonstrating a Leica Laser Measure at the gallery opening. This spontaneous action came about when I explained to a few listening punters that I had been to a “Using Light as a Ruler” science talk. The talk (mentioned in my ‘Research’ post) showcased the work of scientists in Glasgow University, using laser lights to make a device to measure gravitational waves. My brother piped up and told us that they use laser light for distance measurements in building works. My Dad (who works with him) disappeared for a few minutes and returned with the laser tool and proceeded to measure the gallery which grabbed the attention of everyone!