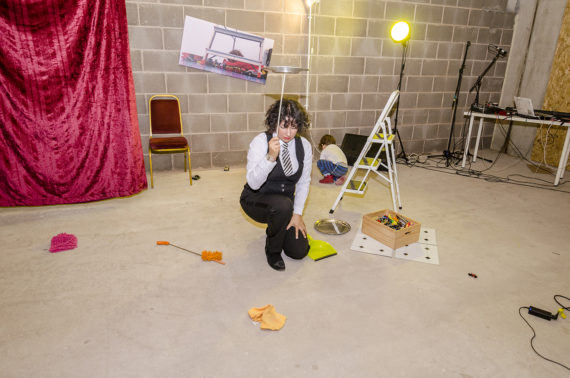 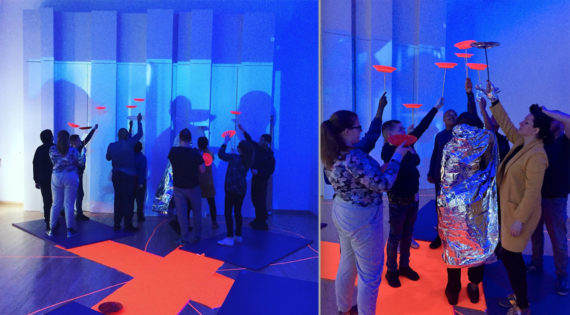 For our final session in the school, the plan was to set-up the film we had made, then explore performance sequences in pairs building towards performing as a group. However, on arrival there was already a group in the 4D space and we had some technical difficulties getting the film started that meant children were arriving before we were set-up. As an artist who identifies as neurodivergent, the change in times and sequences can affect my confidence and I wasn’t sure how to start my session as I am a facilitator/performer who often doesn’t like to lead. This may sound contradictory, however, I have found my open approach to creative sessions lets people express themselves in their own time and way, although I really was struggling and I could not see how to bring the focus in the room back to the start. I just said that ‘this isn’t working’ and Katy and Sarah quickly came together to support me in re-starting the session. Sarah told the group that we were going to watch the film first and then perform, following my lead, with the plates. The simple plate spinning sequence was informed by what I had seen in previous sessions, performance actions such as ‘follow my leader’, walking in a circle, watching our shadows on the wall and grouping our plates together. 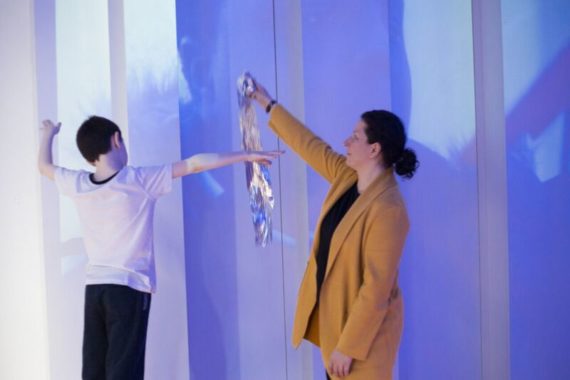 We re-started by watching the film together and then as it played for the second time, I instructed the group to follow me. Slowly we found our rhythm together with the music and we then carried out the following actions completing the sequence. It felt really good performing in a large group and I could see that the children were enjoying themselves and were getting lost in the immersive environment. One student said in session that: ‘this is a beautiful paradise’. It has been a pleasure working at Grange School with the children, teachers and support workers in such a high-quality learning space but how do I translate this back at the art gallery event for World Autism Awareness Week? 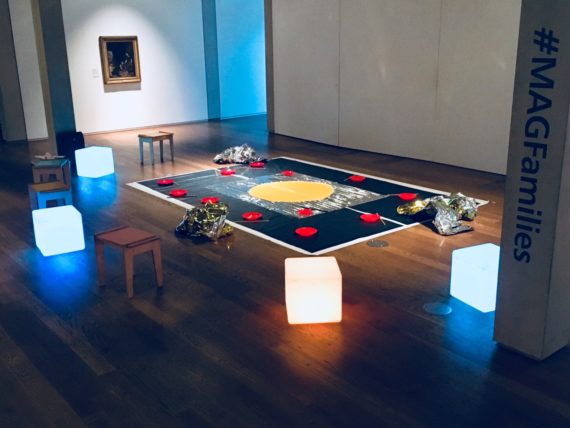 Our last session was at the gallery, which was a chance for some of the students to explore a new public space and have a performance rehearsal. Once again we experienced technical issues, this time with the projector. However, we could still perform using the soundtrack, which enabled us to get the session started. My challenge is to work with what materials are available at the gallery in an attempt to recreate a sense of the environment at the school and I will experiment with introducing blue lighting, colour film and develop a temporary textural, luminous stage.