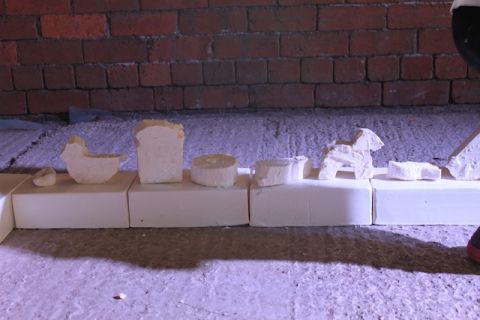 Have carved twenty six grains this morning, that’s a record I think. There are two more hours this afternoon. Maybe it’s the proximity of the Finsihsing Event that sporned me on.

Nastaran Samii was with me in the morning and in the afternoon Sally Ann Roberts will join me. It’s great to have all these different people with me, people I know and who are friends.

This morning two women came (one of them a friend) with two children. Will see who the afternoon brings to the Grain Warehouse.

Now, there were a couple more people in in the afternoon. My comment book is nearly full so need to get a new one before Event tomorrow night.

My friend Maia Conran arrived this evening and she is giving out Grain to visitors at the Finishing Event tomorrow. It’s great to have her here!!

It was great that my friend Kate Pickering came up from London to see GRAIN on Saturday. We talked about the difference of performing yourself in your own work or asking someone else to do it; the option of maybe talk during the performance to possibly introduce another layer;70s and 80s performing women – seriousness, labour etc. She also introduced me to ‘Speculative Realism’ which I’ve now started to read about.

LUSH bags got delivered to Cafe 1819 at Victoria Quays on Saturday and it was good that I met Kate there and she helped me to get them to the Grain Warehouse.

Today started with a positiv buzz. My friend Julie popped in first thing and stayed for quite a while and it is always great to see her! Augustinas was my assisstant and Fran was documenting and brought one of her friends too. Some building maintenance people walked in and out showing interest in the project and doing their work in and around the building. A couple visited and said they’ll come to the Finishing Event on Wed. to get a grain and they generally really seemed to like the work. Then there was this photographer whom I saw taking images around the area and he came in to see the work too. Finally there was another man popping in and a woman rushed in last minute just as I’d finished carving. She found one of my flyers in the Showroom Cinema and was curious. She also will come to the Finishing Event to see me carving and to get a grain “I’ll need a big saop dish” she laughed.

It’s very tricky to estimate how much soap will be left over after the event, worshops and after I’ve given soap grains to people who where involved in the project. I guess I just have to see and cross that bridge when I come to it.

Also got today through the post aprons for the kids participating in the workshops and more gloves for myself and the workshops. I ordered some more nibbles and wine and will get some stuff from the deli counter on Wednesday.

It’s all coming together, but it is a very busy week with the Event and workshops happening. 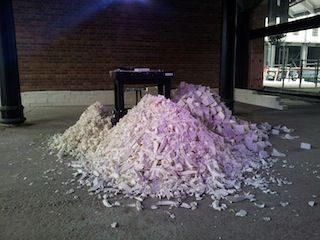 Very snowy today and it made the space with the white grains look even more beautiful and fairy tale like. I picked up 200 more flyers from the printers this morning and they were A6 instead of A5 as I thought I had ordered. I wrote it on their form wrongly – so my fault. A6 works too, they are in the Grain Warehouse now.

I thought less people will be about in this weather and two had already sent their apologies in the morning that they are not visiting as planned because of the snow. In the end a few people did pop in.

A group of five or six photographers and printmakers who are preparing an event in the space for April came to measure and check out the space and also liked GRAIN. I found them a bit respectless as they rushed in started measuring and talking really loudly. All that would have been ok if they would have checked with me or Helen if that was ok. Just a gesture. They were nice enough but it’s just the way they went about it.

Penny McCarthy, my course leader from the MA visited and gave me some very good feedback. I was so pleased to see her as I was worried she wouldn’t make it. Penny was commenting on the timelessness of the piece and how it reminded her of Rembrand; the importance of the grains being stored away and the beauty of the shavings. In fact she thinks the shavings could be a piece of work in themsleves as they tell the story of a process and don’t need any explanation. Penny also thought that the work doesn’t need any explanation as it speaks for itsself. That, I took as a huge complement. She liked that when you entered the space you didn’t know for how long I have been sitting there carving or for how long I’ll be there continuing carving. She enjoyed the fact that the visitor has to discover what it is I’m actually doing and what role the soap bricks have and that at the back one discovers the carved grains. It was nice to see her.

The man from the Cafe popped in again to see the progress and chat to Helen, who was my assistant in the morning. There were a couple fo guys who had read the article in the paper and came to see it and a woman who also read the article. She caught me when I just stopped for lunch and we had a nice chat. At the end Eamon Hunt, who installed the lighting, popped in as well. By that point my friend Judy Hockley was my assisstant and they discussed the project too.

David Lobo sent me his invoice for his wood work he did in the space and I’ve paid him. Some of the carving tools for the workshops have arrived and one parcel I need to pick up tomorrow from the sorting office. I’ve received confirmation from Kay Hodson that the first two days of soap carving workshops are all booked up now with her groups of home educated children. I’ve still got spaces for the first slot on Saturday 30th, but I’m confident I can fill those.

Tomorrow my friend Kate Pickering is coming up from London to see the project and I’ll take her down to the Grain Warehouse in the afternoon. 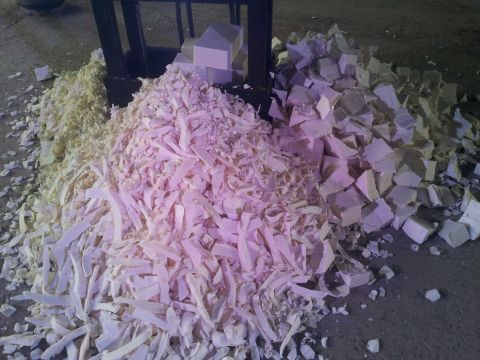 It felt a lot warmer today although the forecast was for snow. Got thirty grains done and enjoyed a good carving rhythm. There were five visitors: a guy who read about the project in the Telegraph and is staying at the Hilton Hotel came in first thing, then a couple of men who seemed very interested in the space, a young woman who Sue talked to about the project and another man. Sarah for a bit and then Sue were my assistants today.

I wonder if I should have somebody else carving which would enable me to sit in the space and talk to people. I do miss talking to the visitors and at the same time when I’m carving it absolutely would not feel the right thing to do. So yea, for projects like this I need to get other people to be the performative element while I’m in the space with them. The interaction with the people seem to matter a lot to me.

I’ve payed Very Creative for the lighting equipment today and asked David Lobo to invoice me for his work too. Tomorrow 200 more flyers are ready for pick up. There are only about ten left in the Grain Warehouse. Maia offered to give out the grains to visitors at the Finishing Event, which is great. Michelle Leahy from LUSH is coming up from Poole next Wednesday for the Finishing Event and stay for at least one workshop the next day. It’s amazing that she is making the effort to come up all that way.

Tomorrow I’ll start taking soap bricks from the third wall, the one behind me.

Carved twenty seven grains today. I couldn’t believe it when I looked out of the window this morning and it was snowing again. It won’t get better this week according to forecast but I have hope for my last week in the Grain Warehouse to get some more + degrees.

Abbie was my assistant in the morning and Augustinus in the afternoon. Augustinus commented he really enjoyed it and I was pleased as he is going to be with me all five hours next monday. Abbie too enjoyed experiencing the work in situ.

Only two visitors came today, a man and a friend who came to revisit to watch me carve and see the changes in the space. Fran was documenting in the morning and focused on the bit where I put the grains down in the grain store and pick up new bricks on the way back to my stool.

Two of the soap brick walls are very low now. I will leave the last row of each wall and two out of three walls are very close to that. I might start the third wall on friday I’ll see how it goes.

Silvia Champion is creating unfamiliar scenes in often familiar places using an abstract language rather than a verbal one to tell a story. Her interest in perceptual situations and spatial and temporal interventions makes her emphasize the process and duration of the works making as well as the finite amount of time it is shown to the public in its material form. She is curious about what happens to actions, objects and sound when they are taken out of their usual environment and set in unexpected surroundings. Â