The collage show is up and running and we did the film screening last night. While not all of my selectons met with approval by the audience, in general the films were well received, especially (of course) the brilliant film Human Remains, a Sundance award winner by Jay Rosenblatt. That film provoked a lot of discussion, which is why I programmed it. There were other films that were liked very much as well – notable mentions include:

Harriet Macdonald’s film Another Year Gone. Originally from Tasmania, Harriet experiments with paper cutouts and a bedroom lamp to bring scraps of paper to life and create a strange other world.
http://vimeo.com/harrietmacdonald

and a beautiful film called Correspondences, by Tim Baker with music by the Kleptones. http://www.mutantpop.net/radioclash

The exhibition of paper collage has interested many people all of whom have noted that it’s extremely rare to see a whole show of collage by different artists. Solo shows, yes such as the magnificent John Stezaker show at the Whitechapel recently

but group shows not so much. In fact I don’t remember ever having seen a whole group show of collage artists. Hmm. The reason we did this show was in fact to show the range of collage practices, how different artists approach collage in their own unique way.

Collage is really interesting because it’s something that anyone can do, everyone does it, artist or not. I cut my collage teeth, so to speak, making cassette tape covers for my mixtapes, in the days before cds (even after CDs, cos I never liked those). As kids we keep scrapbooks. And then, quite often we forget all about this and go on to try to make “proper art.” But then, you go back and revisit collage and it opens up a whole world of possibilities.

Artists do it for different reasons, and with different results. It can be a side-practice that gets you to know your main practice better. It can be a fun thing you do to relax but still be art-ing. It can become your main practice like it did with Stezaker. It can allow you to be critical and political. It allows you the opportunity to examine and interfere with the cultural detritus that is all around us in the shape of books, magazines, adverts and so on. For me, as a photographer and a film-maker, who misses the viceral hands-on working with film since I moved to digital, collage represents a reconnection with the manual process of art-making.

The artist in this show all take a different approach to collage. Glenn Ibbitson rips up magazines to “paint” in a classical style; Nick Wright cuts Argos catalogues to re-create the bucolic Midlands landscape that is being encroached on for endless building; Nazir Tanbouli cannibalises his own drawing books to deconstruct and reconfigure his own work, using only the books themselves. Lorena Balbinot works with newspapers and magazines to locate texts and images that, slyly reassembled, are deeply critical of the political and social status quo. Her work in this show comprises a large piece, two books and a tea set collaged with horrific images of the Iraq war. As for me, Gillian McIver, I made small works on paper and (for the first time) works on canvas. I did them in the studio just before the show and put them out hot and fresh, which is what the studio is all about. Come and taste, tell us what you think.

Social network and how much time it takes!?! that is the question!

– a blog attached to the website where we put pics and things from the projects and shows, an email list ….

it’s a lot. And does it work? Does it drive people to come and see us? Or is it just more spam and infoclutter?

I also have a Twitter account (@bitterwit) where I do post stuff about the studio from time to time, although most of it is just my personal views.

We’re told how essential social networking and digital presence is, it’s become a religion.I even went on a 2 day course about it. The proof however wil be in the pudding.

It is more eco-friendly than flyering, though.

Your thoughts on this very welcome! 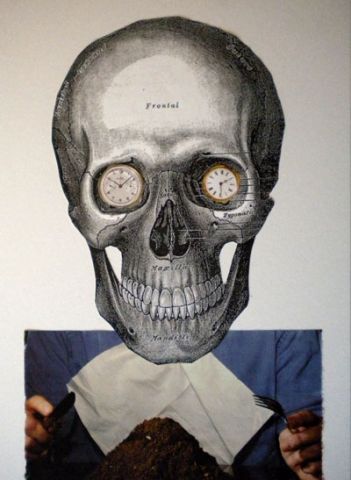 Nazir made a video of the project he did with Jonathan Comerford, THE COCKFIGHT.

Now it’s my turn to conceive, organise and select a show for the Studio. I chose to work with collage, mash up and remix as it’s something I’ve always been interested in in art-cinema, and I have always loved collage art (John Heartfield being my favourite).

So I came up with this, here (below) is the info. I am quite excited about it as there is just some truly great art here! I was very happy also to thank Jay Rosenblatt for permission to screen his remarkable film Human Remains for this event.

An exhibition of contemporary collage, and a screening of short film and video art

a screening of short films April 15 at 7 pm, including a special presentation of Human Remains by Jay Rosenblatt, which uses archival material to “tell” the story of the private lives of history’s most horrific leaders.

THE SCREENING INCLUDES FILMS BY 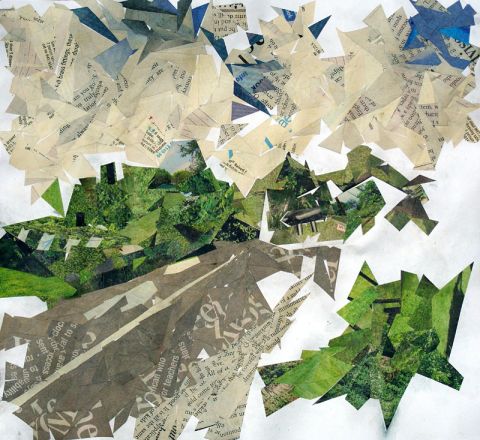