ON THE BLURRING OF ART AND LIFE

Last month I blogged about the difficulty of running physical space in London, because of the property values and the sheer expense of it. In the last few months there been some very unfortunate closings of small independent galleries and artist run spaces and there is no question that the difficulties associated with DIY ventures are starting to reach a breaking point in the city. But that’s not what I want to talk about today.

Since I started working as an artist I’ve been interested in that relationship between art and audience, artist and viewer, public and individual expression. I was particularly influenced by the work of Fluxus artist and theorist Allan Kaprow, who described his work as a “blurring between art and life,” and by the French philosopher Henri Lefebvre, whose book The Critique Of Everyday Life urges that everybody engage in some kind of productive and creative self-sustaining leisure practice. Both Kaprow and Lefebvre communicated to me that art needs to try to engage on every level with all people, all the time. And this approach doesn’t have to be “avant-garde” art, like Fluxus. You can see this communication happening in the art of the great churches, and you can see it happening in any well curated museum.

For me, approach to the blurring of art and life was to work in site-specific art. To bring art into environments that were not created for art, or had little or no contact with art and reinvigorate them through art. To this end, I co-founded the organization Luna Nera, which was concerned entirely with creating artistic site responses in locations that had once had some kind of major public significance, but which no longer had any function. The point of this was not to create alternative gallery spaces, but to create a new kind of art, one that would bring people together and engage.

The same kind of impulse was at work when we founded Studio 75. Using a flat on the ground floor of a social housing estate meant that there was a potential for a steady stream of visitors who otherwise would ‘ve never entered an art gallery; this is a neighbourhood with a lot of art galleries, but the majority of the neighbours never visit places like the White Cube or Flowers Gallery or Iniva. Studio 75 managed to get this steady stream of visitors; some came to every show, some popped in once. Some hung around a few feet from the front door where our large mural was: looking nervous, clearly wanting to come in. We considered it our job to pop our heads out and invite people in.

We closed Studio 75 10 months ago, and opened a pop-up gallery in a nearby café that had a large window space, so the artwork can be seen from outside or from inside the café. The idea here was again to bring art into ordinary, everyday public life. It was interesting to discover that while people had taken studio 75 seriously, they did not take the idea of the pop-up seriously as an art project. While we had people clamouring to exhibit studio 75, even offering us large amounts of money to let them exhibit (which we refused), this wasn’t the case at the pop-up. It seems that in most cases people see art on the walls of the café or restaurant as décor, I don’t really think about it is art. At first I was surprised, but then I thought about it and I realize that usually when I go to a café or restaurant. I don’t really think of what’s on the walls as art, either. We are completely conditioned to the gallery environment (whether that gallery is purpose built or some kind of transformed space).

We’ve now just closed the pop-up, and are taking stock. Looking back over what I now realize is 17 years (!) of art practice that has largely been around the blurring of art and life, what do I now think about this idea? The next few blog posts will explore this question. 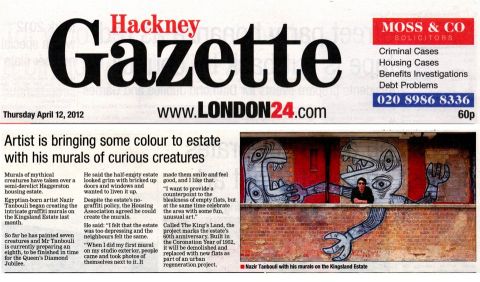