I was thinking about this when I went to an exhibition recently in Hoxton arches. This was an exhibition called Stomach, a one-day extravaganza featuring a whole host of artists.

There’s a lot of good work in the show, but I was particularly struck by an artist called Maggie Williams. The Art Book is a project Williams has been working on for some time, détourning the pages of the well-known art history compendium The Art Book published by Phaidon. Each individual page features a single famous and important artwork from art history. Williams has carefully excised elements of the pictures and reconfigured them, so that the pictures are subtly changed in adroit and often insightful ways.

I found the display of 15 of Williams’s pieces together really fascinating and, dare I say it, entertaining. I mean, ‘entertaining’ in the best possible sense. I was intrigued, riveted, and made to feel completely engaged; I started to have a kind of dialogue inside my head about the work as I inspected it. Good entertainment is meant to do just that, it’s not about passive ‘looking at’ something, it’s about really engaging with it. Engaging with your sense of humor, your emotion or your intellect, or possibly all three.

I particularly adored the collage version of The Exhibition Of A Rhinoceros At Venice by.Pietro Longhi. I always really liked that painting, with its phlegmatic, hay-munching rhinoceros being gaped at by the gaggle of Venetians clad in their carnival finery, looking far, far weirder than the rhinoceros ever could.

Williams’s détournement of the picture makes it appear that the spectators are actually watching the rhinoceros mating with its doppelgänger. This seemed to me such a perfect comment on contemporary spectatorship and society. It’s witty, clever and fun.

So I had to have it. Right now I’m in the middle of writing a book about the relationship of cinema and art, and I knew immediately that Williams’s version of the Longhi painting is just what I really needed to have above my desk. It’s keeping me grounded, keeping my writing rooted in the real world, preventing me from going into academic contortions. It’s reminding me to write with wit and humour as well as precision, and to try to make the book entertaining to its eventual readers. It’s reminding also that although the process of spectatorship changes, but our human desire to spectate never really does. It’s reminding me that what looks strange and bizarre in one era, becomes utterly commonplace in another.

I was able to arrange to meet Williams and purchase the picture, and I found out bit more about her. She graduated from the University of Hertfordshire in 2011, and now lives in London, where she’s showing her work in group shows around town. The works displayed on her website show that she explores the intersection between fine art and popular culture, without wasting time in callous irony. Her work is fresh and often surprising, with a cleverness which is both humane and devastatingly well observed. I like it very much, and I’d like to see more of it. And I’d like you to see it too. 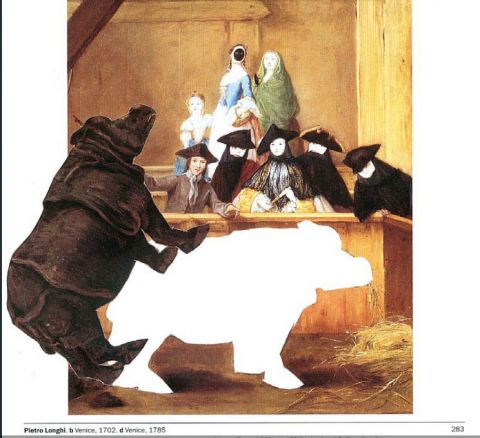 Representation and culture, part whatever (this one’s gonna run and run, I fear … )

and so the culture wars begin …

actually they have been pretty quiet wars, but they are on nevertheless.

I started writing about the way that I have been struck again and again by how just a few London art schools dominate the “art world” here in the UK.

Given that they are all kn the public university system and charge te same feess one might wonder why the London schools offer so much better tuition that shcools in, say, Leeds or Notitngham. Do they? Well if the “art world” is anything to go by, they certainly do. But it’s impossible.

So, then I started to notice that the demographic of the London “art world” is quite astonishingly unrepresentative of London culture. I mean, utterly not representative.

I’m not terribly surprised by this. I don’t think it was ever meant to be representative.

I mean, let’s go back into history – to the founding of the RA and the Académie des Beaux-Arts. The ‘art world’ has long been about defining boundaries and creating the “in” and the “out” and pretending it’s all about the “quality” of the art. Sometimes it is, and sometimes it really just isn’t. Do I need to cite examples of stuff that was locked “out”, but went on to be groundbreaking? And more examples of stuff that was celebrated “in”, but we would not use as a coaster today?

What is “quality” anyway – that shifting, imprecise category – and whose quality, and who defines it? Does it mean, adhering to principles set down by an Anglo-American-Western European aesthetic?

Or is it something else? Is it quantifiable? Is it about price – that is, the best art is that which can bring the best price? (Er, no that’s not where we want to go is is? Is it?)

Ithas to be said that the Anglo-American-Western European aesthetic – sometimes called the “international style” is dominant. That’s why all the biennials and the blockbuster contemporary art shows look the same.

So, again, why IS the art world so nervous around the idea of a broader aesthetic perspective? And why do we just accept it?

We can not really pretend that ideology is not part of the process.

It’s the smack of “them-ness” that I don’t feel comfortable with. The idea that anything which does not fall into the “international style” but instead refelcts a different aesthetic, perhas even a hybrid one, is not quite quality enough. Or is too unfamiliar. So it’s art about and for “them” not “us”.

But come on – it’s London – the biggest “us” in the world! I refuse to see my fellow citizens and neighbours here in the UK as “them” even though their art work is not much visible. Her ein London now we have the means and the personnel to make the best most interesting most different art in the whole world! Cos everyone is here, now, mixing it up.

But I think that we are just not even talking about it. Open the conversation and you hear the sharp intake of breath. Uh, oh. Nobody wants to go there. Upset the apple-cart of the canon, and you have no hope of getting aboard.

THE PERVERT’S GUIDE TO IDEOLOGY