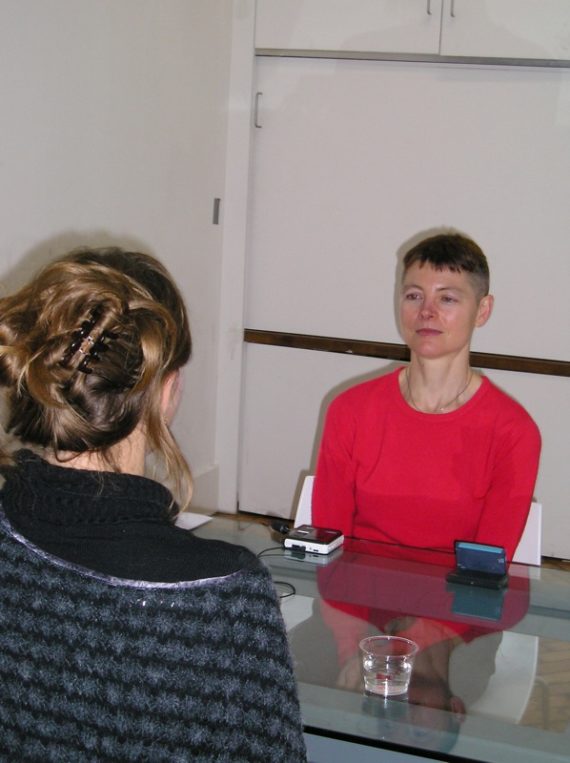 The second part of my project is seeking to set my work in new contexts. This involved contacting programmers and curators, especially those engaged with sculpture, to talk about how my one-to-one practice might sit in a museum/gallery context. Producer Andrew Mitchelson and I contacted a long list of people. So far I have had three meetings, which have all been valuable and given me a lot to think about. Thank you to Laurence Sillars at Henry Moore Institute, Paul Hobson at Modern Art Oxford, and especially to Sam Trotman and Jenny Salmean at Scottish Sculpture Workshop. Although nothing concrete has come out of these meetings (and in some ways they’ve confirmed the feeling that audience numbers are still the bottom line), they have suggested some creative ways of getting my practice more visible and present.

So, after a long hiatus (I am not the world’s most prolific blogger), an update. I’m currently finalising my notes from the three gatherings of artists, producers, researchers and programmers in Glasgow, Leeds and London. These have been a definite upside of this project – so much positive energy and creative thinking about what we need and what we can do to support performance for small audiences (and more broadly, performance that is quiet or takes time, or otherwise goes outside of expectations of the spectacular). I’ve also had great in-kind support from Take Me Somewhere in Glasgow, Compass Live Art in Leeds and the Live Art Development Agency, who’ve all provided space and contacts.

The process has been quite intense and there’s a lot to take from it. The biggest thing now is how to build on this energy. I think there is scope and demand for a network of people working in this practice – but that needs more resources, and I’m trying to work out how this might go forward. There are also a lot of ideas about resources and support that would be useful, and I would love to find some avenues for taking those forward, but again it requires time and energy that I don’t feel I have at the moment. The other people who’ve been engaged in these gatherings also all have limited time and resources. So there may be a fallow period of thinking/ exploring before we find some ways of building on this work.