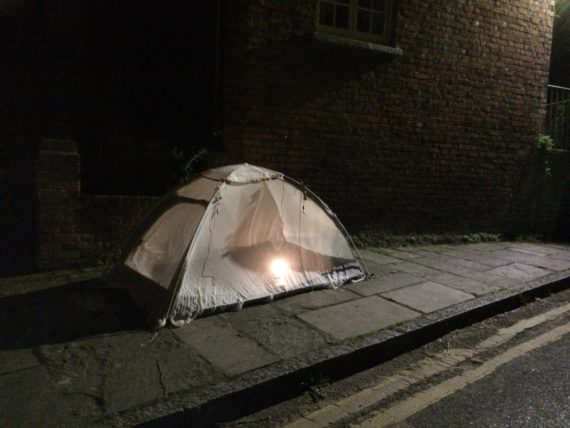 As one comes out of Waterloo Station the huge circular Imax building on the so – called Imax roundabout looms across the road.

Despite its formidable size the church of St Johns – whose railings front the Waterloo road – is easily waked past without much attention. Back in January a sad and bedraggled group of artists were to be seen in the churchyard, hunting out spaces, rain dripping down our necks and wishing we were back in the dry. Oh the joys of a wet site visit! We walked round trying to imagine the trees in full leaf and working out where the shade would be.

…..and back again in March; only this time it was snowing! By now I had begun to be incensed by images flooding social media of  unecessarily unpleasant  bureaucratic treatment of the homeless. No homeless person dared go to the loo it seemed, for fear of confiscation of both their tent and possessions. On my every visit to London homelessness seemed to be growing. Media reported city benches being made so that no one could lie on them and businesses installing automatic sprinklers outside their shutters.

I felt ashamed and it was much on my mind. Returning home I mulled over my images of the church and churchyard.

Our exhibition was to be called ‘Nothing Endures but Change’ and bought together the Festival title ‘Transforming Minds’ and the possibilities of the churchyard and I wanted to do an installation piece.

One space called to me. At the foot of the crucifix and hard up against the church railings it was at the end of a row of weekly food tents; the unloved quality of it made me think of it as a space for a homeless persons tent. 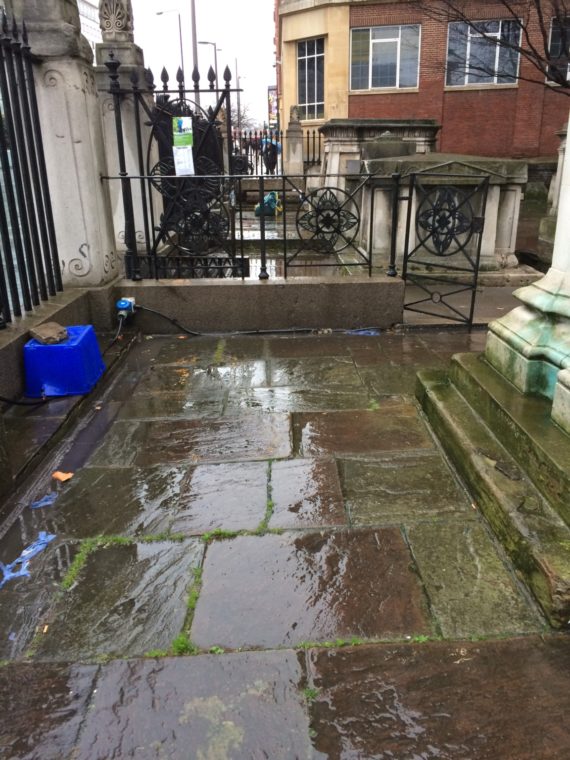 By the time I got off my train in Kent I was intending to make a tent – an enigma of a tent. An aesthetically pleasing, fragile thing that offered no entrance, nor shelter, yet whose beacon light called to the weary.

Searches on E-Bay, trials with fabrics – too hard, too frail, too strong, no movement, wrong colour – finally resulted in the choice of scrim; a very loose weave cream material printers use to press ink into their print block before printing.

I had hoped to remove all the plastic from my tent frame,but it very quickly became apparent that if I did all the tension would be removed too, and I would be in trouble…I am still working on that. All the black metal was whipped with garden twine. I wanted something which was a tent, but wasn’t – something lyrical.

Price had forced me to purchase a tent bigger than my original intentions =  more issues – and I still have no idea how to collapse it for transport.

I have however managed to mock it up in the dark and produce a passable image for the header of this site and for the portal I shortly have to upload all my work details to.

I am off abroad in two days time and will be returning to finish the fiddly bits and problem solve the transport, the remaining plastic, how to collapse it, and if there is enough light for a solar light to work will work under the scrim….. 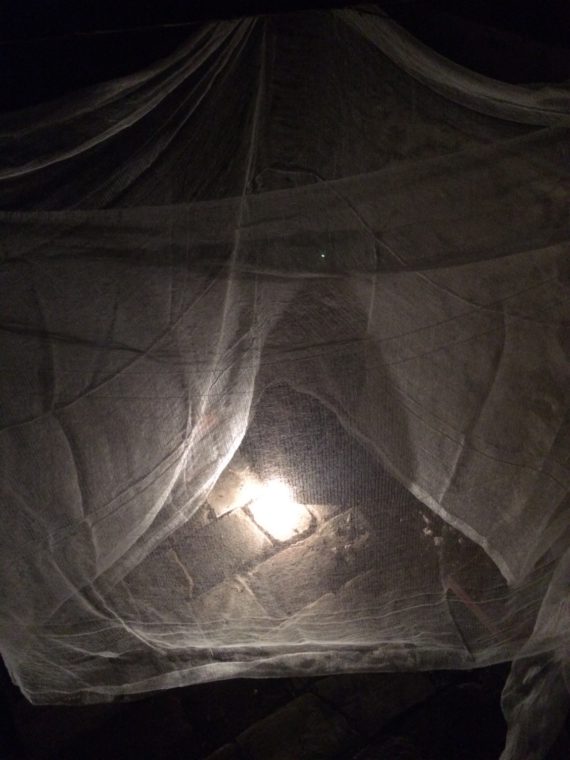 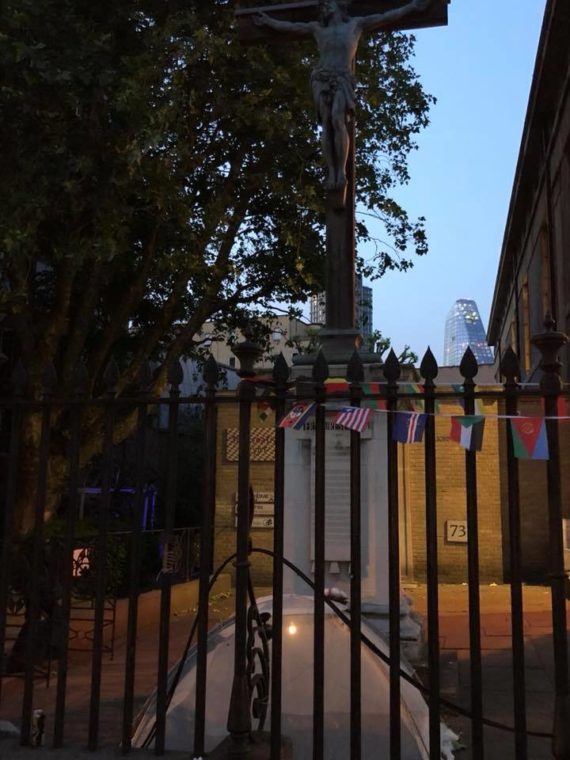 So – ‘Tent’ was completed and installed at the beginning of this week on a blisteringly hot day with the church gardens – which are quite beautiful- in full bloom. A completely different place to our site visit in the rain. It felt open and alive and the gardens were full of both office workers eating sandwiches,sleeping bodies and drinking buddies surrounded by cans and bottles.

My chosen installation site at the foot of the crucifix and in a corner at the end of a line of red street food tents still seemed right. It felt forgotten, unembellished and unconsidered.
When I visited to install there was now a vase of wilting flowers on the base of the crucifix, something I hadn’t expected. Its floral nature softened,sweetened and distracted from the singular colour and texture of my tent in a way I found uncomfortable, but the fact the flowers were losing their colour and virilty helped make their addition more paletable.

I left with the work installed and was consequently sent an image of the installation at night – with the solar light in the tent visible from the Waterloo Road. A reminder I hoped to the home going revellers making their way towards warm , safe beds…