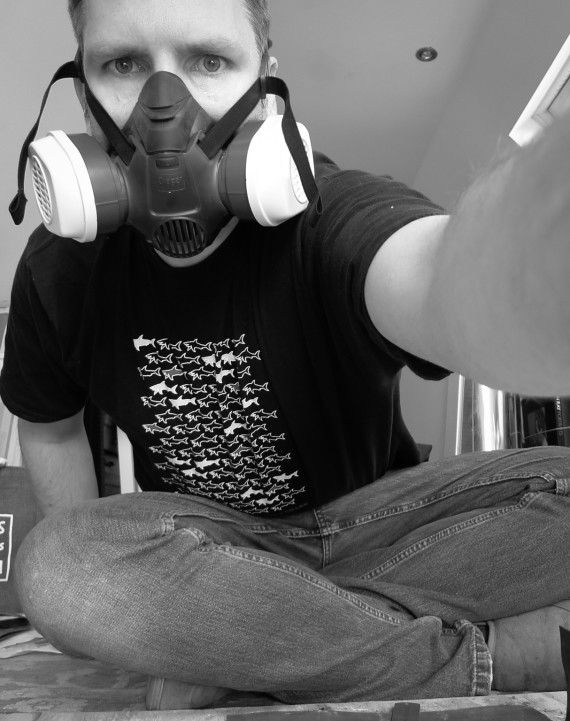 Today I set up an installation in Ipswich at the Freudian Sheep.

It consists of 6 pieces relating to a common theme: –

“In July 2006 I had a car accident, whilst I was slipping in and out of consciousness I received a CT scan to investigate if I had internal bleeding, I did not but the doctors found something they weren’t looking for, an enlarged spleen. My oncologist described my accident as serendipitous, as further investigations resulted in my diagnosis of an asymptomatic illness. On the 14th of September, aged 32, I was given a prognosis of 96 months.

The discombobulating effect caused by my learning of the potential date of my probable death resulted in a complex gamut of emotions, these were heightened as the date approached. Relevant words I read and heard were underlined, everything became more intense. The ‘knowledge’ overpowered my rational desire to make the most of my time with my family, I was overcome by an agonising sense of foreboding, dwelling on my mortality resulting in anxiety and a ruminating depression. But when the date passed the relief was quickly replaced with uncertainty, the ‘knowledge’ which paradoxically provided some comfort at first, when the date was years away, tormented me as the date got nearer and created a feeling of distrust when I didn’t die on that day, knowing that from then on everyday was borrowed and I was now over due. As an engineer I knew that the prognosis I’d been given was a probable date with significant variability of at least two standard deviations either side, yet logic didn’t play a part in my feelings. Existentially I knew that everyone’s subject to mortality, you’re born, you procreate, you get old and you die, it is the natural order, however most can ignore their mortality and get on with life, I was forced to look into the abyss far sooner than most, a letter detailing your prognosis proves to be a strong Momento Mori.

The artwork was inspired by artist like Christian Marclay, whose seminal piece ‘The Clock’ (2010) captures 24 hours in real time through the editing of famous movies winning him the Golden Lion prize for the ‘Best Artist’ at the Venice Biennale. Felix Gonzalez-Torres ‘Untitled (Perfect Lovers)’ (1991) two clocks hang side-by-side, synchronised, the observer watches knowing that one will surely stop before the other. The artists partner, Ross Laycock was terminally ill at the time that he made the work, Gonzalez-Torres once said that “Time is something that scares me . . . or used to. This piece I made with the two clocks was the scariest thing I have ever done. I wanted to face it. I wanted those two clocks right in front of me, ticking.” On Kawara’s ‘Today’ series was a body of work that spanned decades. Most days he would make a new painting, which simply consisted of the date, white text on one of a variety of coloured backgrounds. The painting was accompanied with a Newspaper clipping from the day and city in which the painting was created. He created nearly 3,000 date paintings in more than 112 cities all over the world. The series finished with ’JAN.12,2013’ (which had a black background), he died shortly afterwards, underlining the works raison detre and it’s gravitas as a memorial. Although many other artist’s pieces contributed to my thinking and the development of this installation.

Like Matt Damon in the Martian (2015), I thought I’d “science the shit out of it” (it being my art). So I’ve also been reading Stephen Hawking’s The Illustrated A Brief History of Time and Craig Callender’s Introducing Time, here are some of my notes in my sketchbook: – 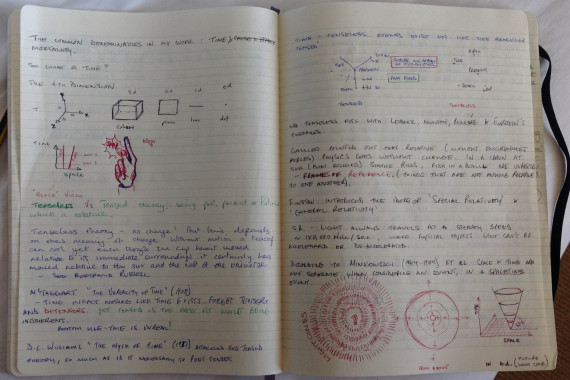