My mind will probably go faster but the making of art is likely to slow down. This is my expectation as I prepare to start my Masters of Research in Art: Theory and Philosophy at Central Saint Martins. My first lecture is next week.

The plan is to keep my studio practice going as much as I can although it won’t be easy as it is meant to be an intensive course. It will require a discipline to get myself to my studio in the first place but it’s important that I do as I’m hoping that my research will feed into and inform my practice and vice-versa.

As usual summer has interrupted my studio practice but I’ve made some progress over the last couple of weeks exploring my collage and paint endeavours. I have been enjoying working on my more simplistic work where I start with painting an acrylic ground and then follow it with collage. These works seem to have an energy and purity to them. There is something about the way the physical collage interrupts the paint and creates an opening that I would like to explore more.

In contrast to this I have also embarked upon mainly collage pieces which I shall be adding minimal paint to at some point with a view to playing with the connections between the shapes, light and shadows. This mainly focuses on interiors which I have deconstructed and then repeated bits of in places. These are more studies than finished works and as I work on them I am inclined to do all this digitally in future as I think the images lends themselves to be slick graphic works on paper (much like looking through the windows of a modern building). 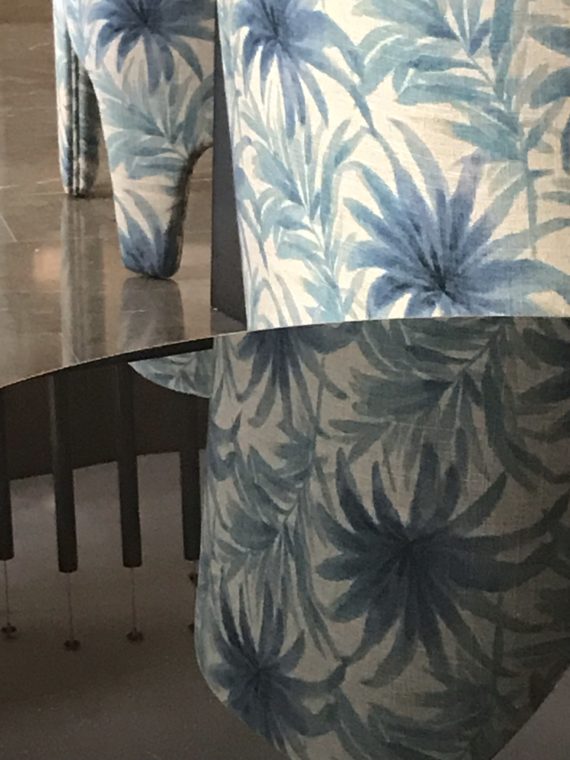 I’m about to start a new body of work. This is always an exciting time as I anticipate the journey ahead and what surprises it might bring.

I’m currently preparing my surfaces – stretching, sealing and priming a number of small canvases. I don’t find this at all laborious. In fact is feels like an important part of the process and feels meditative in its nature.

This new work I intend to be a development from my abstract collages on paper I have been working on over the last few months. I will be using a similar approach for some of the work, plus also introducing aspects of work completed previously in terms of print transfer and oil painting combined.

As for subject matter, I will be using as my starting point some photographs I have taken recently where the object or objects in the photo are unclear. I have tried to capture the connections between things, the light, shadow, shapes and pattern so that the final photograph is a suggestion of something abstract and undefinable.

I plan to include some mark making within the final work whether it be painting or drawing. My intention is to try and push this more as a emotional and playful response to the abstract image. However I am unable to explain anymore than this as I just don’t know what might happen along the way.

The image shown is a photograph of mine that I’m likely to include in this new body of work. 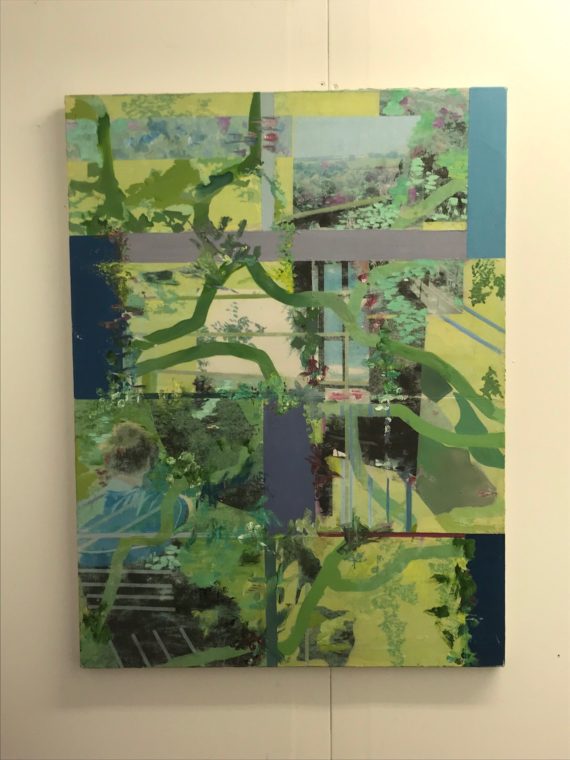 I have just finished being involved in Open Studios in my ASC Studio complex in Kingston for the last 2 weekends. It was a busy time. Well over 250 people wandered into my little studio to view my work and have a chat. All sorts of people came and visited ranging from other artists, the occasional art enthusiast, couples looking to buy for their home and families curious to know what we are up to as well as get their kids (and dogs) out and about.

I spend a lot of time talking, explaining what I do and why I do it. I generally get a positive response. We do try and sell during our open studios but painters fare less well than print makers and ceramicists as our prices are naturally more expensive by nature of what we produce.

With this in mind, I had deliberately created some smaller collage works on paper, wanting to have some art more accessible to the general public who were just out on a wander and not out to make any larger financial investment.

It didn’t quite work out. The public was far too interested in my other work. I had many price queries and a couple of commission enquiries too but it just wasn’t in the public’s price range. I will say this now – I am not expensive. It is simply down to the expectations of the people visiting.

Should I perhaps have not displayed my major work and stuck to exhibiting just my ‘affordable’ collages? The trouble is I am not running a shop. I want to be able to have my main practice on show as it is who I am and what I do. I could always not sell anything and just work whilst people visit but the reality is it is very hard to get any work done with people wandering in and out. It also costs quite a lot to put on Open Studios, so clawing anything back financially is always appreciated.

I did manage to sell a few collages in the end, but ironically this was when my studio was so crowded, other visitors couldn’t get in the door properly, so they only had access to the collages at the end of the table. Ha!

We are meant to be trying to do another Open Studios in November. I’m not sure I will be able to participate as I will have just have started my Masters so imagine I will be in the thick of it. However, if I don’t open up, this will let down my colleagues in the other studios. What to do, what to do? I think I shall just not think about this until nearer the time. Actually I don’t want to be thinking about it at all. I want to be thinking about how to further develop my art practice.

Take me to the moon

I recently went on a day trip to Margate specifically to go and see before it finished the Katie Paterson and JMW Turner ‘A place that exists only in moonlight’ exhibition at the Turner Contemporary.

I’m still thinking about this exhibition; it certainly inspired me. This was for a number of reasons – it’s ephemeral beauty, it’s crossing of borders between science, art, music, literature and geology and Patersons collaboration with experts from different disciplines. But perhaps more than anything I was really struck with how it could capture the imagination of most people who visited it. As an example, Katie Paterson’s piece where the score of ‘Moonlight Sonata’ is being played on an automated grand piano. But the music isn’t perfect; whilst clearly recognisable, there are bits missing. Reading the blurb, we find out that the score has been converted to morse code and reflected off the surface of the moon. However bits of it get caught in the moon’s shadows and crevices and it is this incomplete morse code that Is sent back, resulting in a fragmented score being played. We see the morse code ‘before and after’ displayed on the wall as evidence but this isn’t perhaps necessary. What is particularly beguiling is the way in which this art piece takes us all to the moon and back and ever so simply.

Katie Paterson use of Haikus also demonstrates this desire to transport people’s imaginations. They are but a few words placed on a wall but a few very carefully selected combination of words and ideas and when placed in conjunction with a few of Turners delicate watercolours, they have the ability to create an internal ‘shift’.

I can’t pretend to be able to create that kind of magic with my art, but I like the idea of producing work that opens up the viewers imagination.

It’s been a busy month and I’ve struggled to get to my studio. Thankfully this week, it’s getting back to normal. The good news is that I had something to be getting on with straightway so it was right back into it.

I’ve been continuing on with my works on paper; collage and painting explorations. I’ve been using slightly bigger sheets of paper this time and instead of including bits of images from magazines, I’ve been using my own printed out photographs, focusing on some images from the New Zealand landscape. I like the idea of contrasting my painting that has a UK context set against alternative New Zealand imagery.

I was recently asked why I always work in layers. By collaging different shapes onto these painted backgrounds, it creates a kind of interruption. These interruptions brings forth new ways of seeing and create different possibilities. I have come to realise that when it comes to art, I like the unexpected and this way of doing things helps facilitate that.

I think layers also makes the viewer look a bit harder. There is a kind of ‘seeking out’ of some sort of clarity or explanation, which in these cases, can really only be found in the viewer’s psyche. It feels a bit like creating a Rorschach test – and  by this I mean the abstract ink blot tests used in psychology to help examine a person’s personality characteristics and emotional functioning.  However I’m not trying to delve into other people’s inner workings. Quite the opposite, I am trying to cut ties, create openings and move on in fact.

I’ve mentioned before that I’ve become rather disillusioned with the whole ‘exhibiting’ rigmarole. That doesn’t mean I will never exhibit again, but I’ve been searching for something to help fuel my art practice in a much wider sense. To this end I have accepted a place on a Masters of Research in Art: Theory and Philosophy course at Central Saint Martins starting later this year. I don’t know what this will specifically bring to my art practice, but I’m looking forward to the copious reading, writing, meeting new people and the different challenges ahead.