Well here we are. More than two months into the new year and nearly six weeks since my project launched. It’s been busy and varied – always a good thing, and now I’ve reached a natural pause where I can slow down and take stock. I feel as if I’ve got much better at planning projects now and seem to have got the hang of working in short cycles, factoring in pauses to reflect and get in the studio. This last cycle has been one of planning, organising and promoting, and working with other artists and the public has been fantastic to open up new ways of working which I don’t normally use. This simple GIF (below) made by Maja Jones from Fotofonty inspired me to have a go myself (click on the image to view Maja’s animated GIF).

Image below: Still from the launch event at Towner, by Brian Booker. 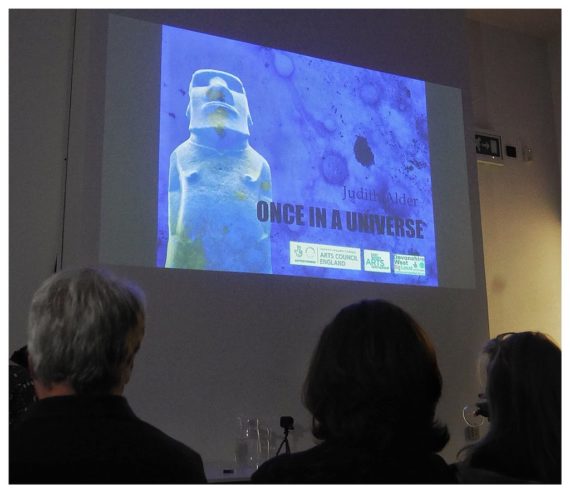 The launch event in January featured an interesting talk by John Cooper, Emeritus Keeper of Natural Sciences at The Booth Museum, Brighton. John’s talk focused on the huge expanses of geological time since the beginnings of the formation of the Earth. It put a new perspective on the concept of time and made me think about the very slow speed of change in nature and natural processes, in contrast to the incredibly rapid speed of change since the Industrial Revolution.

A while ago I decided I must explore the idea that everything I do is (or can be) art. So I decided that for my short introduction for the launch event, I should approach my PowerPoint slideshow as an artwork. Wow! Who knew that you can do such things in PowerPoint? I’m still developing this work even now, making long and short versions, GIFs (like this one), sound, narration, no sound… and turning the whole thing in to a short video. (Click on the image below to view the short GIF)

Here’s another recent resolution – not to move on too fast. Look and look again. Think and think some more. Don’t rush from one idea to another, instead build, slowly. Make links. Add layers.